Trending Now
You are at:Home»Featured»American Politics as a Confidence Game
By Dr. Marvin Folkertsma on December 14, 2012 Featured, Government & Politics 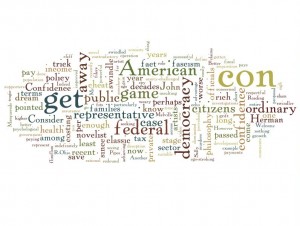 Reading post-2012-election news reports can be hazardous to one’s mental health, particularly for the sanity-challenged among us. But perhaps the singularly most prescient comments come from long ago—from the pen of America’s most profound novelist, Herman Melville, whose words in his powerful novel of deception and intrigue, “The Confidence Man: His Masquerade,” echo across the decades: “Any philosophy that, being in operation contradictory to the ways of the world, tends to produce a character at odds with it, such a philosophy must necessarily be but a cheat and a dream.”

Welcome to the 21st century, Herman, because little did you know that your observations of the 1850s actually define a new stage in the growth of American democracy; call it the “Era of the Confidence Game.” In terms of historical development, this stage fits somewhere between representative democracy and fascism. Consider representative democracy first, which emphasizes the role of bargaining among various parties in the political arena for the purposes of achieving the most suitable tradeoffs in terms of policy results that redound to the public good, or at least to as many people as the interests in question represent. In short, representative democracy at its best is rational, utilitarian, and respectful of the private sector and ordinary citizens.

At the other end of the scale one finds fascism, which is anti-utilitarian in that its major goal is power acquisition by the ruling elite that has contempt for the private sector and ordinary citizens. Leaning in the same direction but logically prior to it is a system dominated by the confidence game, which is based on public officials seeking to gain the trust of enough citizens in order to swindle them into believing some “cheat and a dream” about a public policy. Wikipedia’s list of synonyms is instructive: con game, con, scam, grift, hustle, bunko, swindle, flimflam, gaffle, bamboozle—you get the point. Power, of course, lurks beneath everything a con artist does, but largely a swindler strives for self-aggrandizement. It’s a psychological, ego-stroking thing. Indeed, as John le Carre, the famous British spy novelist, once pointed out, con artists are like traitors in that they relish seeing what they can get away with.

And American con artists have gotten away with a lot in recent years. Consider healthcare reform, for instance, which was supposed to save ordinary Americans from paying ever higher premiums for their health insurance. However, as Sally Pipes has pointed out, a program that was sold on the premise that it would save families $2,500 per year has, in fact, done the exact opposite, costing families about $2,000 per year since the Affordable Care Act was passed, a $4,500 difference that will only get worse as the years go by. It’s a classic case of a con trick that worked long enough to get the legislation passed and that now will become entrenched in federal bureaucracy indefinitely, costing hugely in the decades to come.

It gets worse. One of the most incredible and successful confidence games recently has centered on claims that the rich don’t pay their “fair share,” with the implication that the rest of us are shouldering a disproportionate burden of federal income tax payments. Now, the target in this case consists of half the population that pays no federal income taxes at all, along with their “shills”—supporters—in the media and elsewhere. The fact that the rich, say, the top quintile of American tax filers, fund almost the entire federal government is irrelevant as far as the con trick is concerned; only the con matters—what you can get away with. The better-off know they’re being swindled, and those who pay nothing are easily persuaded that somehow they’re being taken advantage of by “millionaires and billionaires.”

Speaking of what you can get away with, perhaps no better example can be found than the ongoing investigations into the tragic murders of four American officials in Benghazi. Maxwell Smart’s signature line in this case can hardly be improved upon: “Would you believe that this was all the result of an insulting video?” Another classic con, or an attempt at one, at least, since the explanation has now been exposed as a sham.

Which leaves us with the fiscal cliff that Congress has been leaning over for some time. The administration’s recent proposal provoked a chortle from Senator Mitch McConnell (R-Ky.) and a weary sigh from House Majority Leader John Boehner (R-Ohio). “This is not a game,” he lamented. Sadly, it is, Mr. Speaker. It’s a confidence game. Better get used to it.