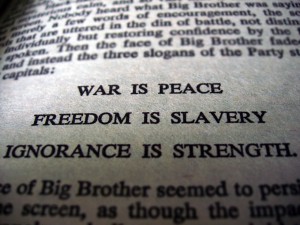 The ink was barely dry on the asterisk in Jimmy Hoffa Jr.’s rant about taking out those “sons-of-b*tches”—referring to Tea Party members—when the vice president made his own contribution at a Labor Day rally. “This is a fight for the existence of organized labor,” the veep shouted. “You are the only ones who can stop the barbarians at the gate!” And the diatribes have continued, with the establishment of a website designed to track unfair comments made by those who, in President Obama’s words, want to “cripple” America. Congresswoman Maxine Waters’ snippet about telling the Tea Party to “Go to H*ll!” (that pesky asterisk again) added a nice sentimental touch, and some Wall Street protesters are denouncing free enterprise with words snatched from Robespierre’s rich vocabulary.

This is pretty harsh stuff applied to a menagerie of mostly gentle souls whose views of constitutional government differ from those of President Obama & Company, but such perfervid comments take on a clearer meaning when viewed in a more appropriate context: George Orwell’s “1984.” That is, somehow certain voices of liberalism today sound less like traditional partisan pep-talks and resemble more Oceania’s “Two-Minute Hate” sessions, where party members screamed at a giant tele-screen filled with the face of Emmanuel Goldstein, one of Big Brother’s objective enemies. The purpose was to deflect rage against miserable social conditions by directing it to a foreign source; siphon off the hatred by venting against Big Brother’s enemies.

The parallels go beyond hurling epithets at that massive Leon Trotsky look-alike in one of the most memorable scenes in “1984.” Consider the three slogans of The Party applied to today’s Orwellian liberalism: “War is Peace,” “Freedom is Slavery,” and “Ignorance is Strength.” As explained in The Theory and Practice of Oligarchical Collectivism, “the book” within the book, the purpose of war was to preserve the domestic power structure. As applied to today, Orwellian liberalism’s increasingly vicious attacks against the Tea Party and Republicans perform the same function, which is to preserve the current liberal power structure by blaming others for its failures. High unemployment, failed foreign policies, high energy prices, horrible housing markets, disastrous federal deficits—they’re all the fault of liberalism’s enemies. Republicans and Tea Party members—you, like Emmanuel Goldstein of 1984—are being blamed and are being used a distraction.

“Freedom is Slavery” offers a host of villains in civil society to whom the American public is “enslaved” under the guise of being free, and could be seen as similar to what Orwell had in mind. Thus, freedom to choose one’s own healthcare plan or no healthcare plan at all is slavery to the insurance companies; Americans “addicted” to oil to drive gas guzzlers is slavery to Exxon and its partners; freedom to eat French fries is slavery to McDonald’s clever advertising campaigns; and freedom to make your own investment decisions is slavery to Wall Street. In fact, Orwellian liberalism assumes that citizens’ own decisions to live their lives pretty much as they please constitutes slavery to someone or another in a so-called “free country,”

Which leaves us with what is likely the most important slogan of Orwellian Liberalism, “Ignorance is Strength,” which means in this context that ignorant citizens constitute the foundation of the liberal establishment. President Obama could not get away with statements about “millionaires and billionaires not paying their fair share” of the income tax without the silent collusion of Americans’ ignorance about how much the upper two percent actually pay in taxes. Similarly, the country’s energy shortages could not conceivably exist with an informed citizenry that is aware of how well-connected environmental activists have prevented production in resources where North America dominates, such as coal, natural gas, and shale oil. Further, the propaganda campaign centering on an alleged “consensus” over anthropogenic global warming could not possibly succeed with an attentive public.

In short, “Ignorance is Strength” for Orwellian Liberals; pierce it, and the whole century-old liberal-progressive project collapses in a heap of prevarications and pretense.

If this happens, liberals’ presumption to govern on the basis of the other two slogans, as well as a thick vocabulary of Orwellian Double Speak, will collapse as well. The question is whether this situation can endure indefinitely, as it did in “1984.” The answer depends on Americans’ determination to reclaim control of their government.