Trending Now
You are at:Home»Featured»Among Christian Refugees in Kurdistan, ‘No One is Angry at God’
By ACN-USA News on January 13, 2015 Featured, International Issues, Those in Need 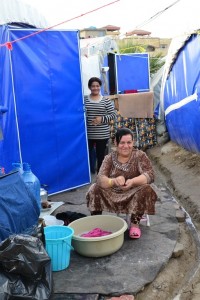 ERBIL, Kurdistan—”Thank you, thank you, thank you:” Suheila, an elderly Christian woman from Mosul was effusive in expressing her gratitude to a group of European visitors. “May God make things easy for you in your lives.”

Home for Suheila is the Sports Club Center in Ankawa, where more than 200 Christian families from Qaraqosh have found shelter in mobile homes: “This is really a big improvement. I’m grateful for it. But in general, of course, this is no life. We’ve lost everything. The worst thing is that we don’t know when or whether we will be able to return to our homeland.”

Suheila has been on the run since June. She ran for her life twice, along with thousands of others. When the Islamic State overran Mosul in early June, thousands of Christian fled. “First we went to Qaraqosh. But when ISIS advanced there in August, we had to flee again. Now we have been here in Ankawa for four months. But none of us is angry at God. Fortunately we are all still alive,” the woman proclaims.

Last summer left indelible memories when tens of thousands of Christians fleeing the Islamic State flooded the towns of Kurdistan in scorching August heat. Given the lack of suitable accommodations, they often slept on the bare ground under the open sky, even in Ankawa, the Christian district of Erbil, the capital of the semi-autonomous Kurdish region of Iraq. The people lay on the pavements and under bushes.

The local Church has been doing what it can. “When the people arrived here they were totally traumatized,” Father Daniel Alkhari told international Catholic charity Aid to the Church in Need. The young Chaldean priest works in the Chaldean Mar Elia refugee camp in Ankawa. More than 800 Christians are living in only some five dozen tents.

Said the priest: “it wasn’t easy for the people to cope with the fact that they suddenly had nothing and had to live in tents. After all, previously they had been used to having their own houses. And they also mistrusted one another. The children in particular were suffering under the situation. They saw their mothers crying and their fathers yelling. Then we began to structure the everyday routine to give the children something different to think about.”

Games as well as dancing and singing competitions put a little joy back into their lives. “Today,” Father Daniel said, “the children are a lot calmer. And the adults, who were completely apathetic at the beginning, are now also trying to get a grip on their lives again. Many have jobs in restaurants or on building sites in Erbil.”

Camp life makes a positive impression. There’s no garbage lying around. Laundry is hanging tidily on washing lines strung between the tents. Even so, Father Daniel knows full well things can’t go on like this indefinitely: “sure, we can improve the camp facilities by installing electricity and washrooms. That’s important and necessary. But the crucial thing is that the people be able to think beyond the present day again.”

Father Douglas Bazi, who manages the Mar Elia Camp, agreed, saying “the people won’t go along with it forever. Many want to leave Iraq. The desired destinations are Australia, America or Europe. They’ve lost all faith in a future here in Iraq. We can’t force the people to stay, and neither do we want to. Others in turn want to stay. Some of them want to return to their houses on the Nineveh Plain after it has been liberated.”

“Others want to set up a new life here in Kurdistan. But it’s really important that we don’t lose the next generation. The crucial thing is therefore to enable the children to go to school again,” the Chaldean pastor said.

It was therefore a big leap forward when, in the middle of December in Ankawa, the first school for Christian refugee children welcomed students to classes. Seven other schools spread throughout Iraqi Kurdistan will open their doors soon. More than 7000 children will thus be able to attend school regularly again starting in January 2015.

Archbishop Bashar Matti Warda, the Chaldean spiritual leader of Erbil is grateful. “This is an important contribution towards giving our refugees new perspectives. We want to thank all benefactors for their generosity.”