Trending Now
You are at:Home»Featured»An Unapologetic Defense of the Virtue of Intolerance
By John Kirkwood on September 30, 2013 Featured, Government & Politics, The Homosexual Agenda, The Social Order 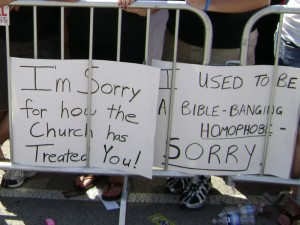 Just the other day, George H.W. Bush was wheeled out as the token imprimatur for a same-sex wedding ceremony. The photo-op reminded me of how pathetic a man can be, not when he’s drooping from a wheel-chair with spittle flying, wearing clown socks, but when he’s so desperate for the approbation of his fellow man that he would sell his own soul to achieve it. Although, that pretty much defines Bush ’41’s political legacy, it also reminded me of a photo-op from an event here in Chicago back in 2010.

A man wearing nothing but underwear on a city street in Chicago jumps down from a parade float to run over to another man who is wearing a t-shirt that says “I’m Sorry.” The men hug; the photographer’s camera clicks, the picture is posted.

This picture has been around the block more than the ice-cream truck. It showed a group of professing Christians at the Chicago Gay Pride Parade and a homosexual man dressed only in underwear hugging one of these professing Christians. There were various captions and a whole host of approving comments underneath the picture. What was the reason for the hug? Well, I think that becomes obvious when you witness the gospel message that these professing Christians had on their signs and placards: one said, “I’m sorry that Christians judge you,” and another “I’m sorry the way churches have treated you,” and finally, “I used to be a bible-banging homophobe, sorry.”

Here is the story of Nathan, a Director of Pastoral Care at the Marin Foundation and the professing Christian who apologized in behalf of all Christendom and hugged the man in his underwear:

I Hugged a Man in His Underwear. And I am Proud.

I hugged a man in his underwear. I think Jesus would have too.

I spent the day at Chicago’s Pride Parade. Some friends and I, with The Marin Foundation, wore shirts with “I’m Sorry” written on it. We had signs that said, “I’m sorry that Christians judge you,” “I’m sorry the way churches have treated you,” “I used to be a bible-banging homophobe, sorry.” We wanted to be an alternative Christian voice from the protestors that were there speaking hate into megaphones.

What I loved most about the day is when people “got it.” I loved watching people’s faces as they saw our shirts, read the signs, and looked back at us. Responses were incredible. Some people blew us kisses, some hugged us, some screamed thank you. A couple ladies walked up and said we were the best thing they had seen all day. I wish I had counted how many people hugged me. One guy in particular softly said, “Well, I forgive you.”

Watching people recognize our apology brought me to tears many times. It was reconciliation personified.

My favorite though was a gentleman who was dancing on a float. He was dressed solely in white underwear and had a pack of abs like no one else. As he was dancing on the float, he noticed us and jokingly yelled, “What are you sorry for? It’s pride!” I pointed to our signs and watched him read them.

Then it clicked. Then he got it. He stopped dancing. He looked at all of us standing there. A look of utter seriousness came across his face. And as the float passed us he jumped off of it and ran towards us. In all his sweaty beautiful abs of steel, he hugged me and whispered, “Thank you.”

Before I had even let go, another guy ran up to me, kissed me on the cheek, and gave me the biggest bear hug ever. I almost had the wind knocked out of me; it was one of those hugs.

However, I think Jesus would have hugged him too. It’s exactly what I read throughout scripture: Jesus hanging out with people that religious people would flee from. Correlation between then and now? I think so. I hugged a man in his underwear. I hugged him tightly. And I am proud.

I’d like to know, proud of what, Nathan? Proud of accepting the outcasts and the down-trodden and bringing the message of eternal life in the person and work of Jesus Christ to the lost — or proud of being accepted yourself Nathan, by the world, by the age, by those who are at enmity with Christ, and by those who urinate on the Word of God and seek to muzzle the bearer of His Word?

Given the message on their signs, their approach and their method, I can’t help but conclude that this gospel was a self-serving promotion the likes of, “look me over but don’t overlook me.” Notice what we didn’t hear from this professing Christian? We heard nothing about Jesus Christ, the cross, salvation, the Grace of God, forgiveness, redemption, sin or the Savior; but we did hear “acceptance and reconciliation.”

The Biblical doctrine of reconciliation has nothing to do with being friends with the world, that’s called fellowship; and fellowship with the world or this age is absolutely condemned in the strongest of terms.

As A. W. Tozer puts it, “Religion today is not transforming people; rather it is being transformed by the people. It is not raising the moral level of society; it is descending to society’s own level, and congratulating itself that it has scored a victory because society is smilingly accepting its surrender.”

The tragedy of modern discipleship is the Christian’s lack of discernment, which has led to the exchange of duty and devotion to God to a saccharine sentimentalism called tolerance. The disciple who is to walk in the steps of Christ must reconcile “the world” that God loves in John 3:16 and “the world” that He hates in 1 John 2:15.

Christ warned that all those that live Godly will suffer persecution and if the world hated Him, then it would certainly hate his servants. Tell me, is there anything about the false gospel of the Marin Foundation “Christianity” that would suggest that type of reprisal?

No, the world will hug them, kiss them, and thank them, and why? Because these professing Christians “tolerate” that a soul that God loves and Christ died for should not be called out of their “death-style” by a loving Christian, but instead — patted on the back by embarrassed believers all the way to their Christ-less grave.

The savior for the lost, the hell-bound and the hell-deserving is not tolerance, but the risen and glorified Lord Jesus Christ. This new virtue of tolerance is but an opiate to satiate the long atrophied sense of accountability that lays dormant in the self-righteous coward.