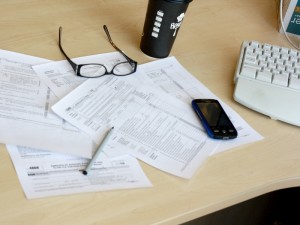 In a press conference last week, White House press secretary Jay Carney fielded insistent questions from a variety of news agencies regarding the Internal Revenue Service’s alleged actions toward tea party organizations. There should be more where that came from because the IRS has cast its net wide enough to catch a pro-Israel group in its haul of organizations that appear not to align with the executive branch’s policy preferences.

By now everyone knows that Sen. Mitch McConnell has called out the Internal Revenue Service for its “thuggish practices” involving intensive scrutiny and extended delays of decisions in cases where an organization included the words “tea party,” “patriot,” or “9-12” in its application for federal tax-exempt status. Apparently at McConnell’s request, the matter is now being investigated by the IRS Inspector General. The House Ways and Means Committee initiated its own investigation into the agency’s policies and practices.

Michigan Rep. Mike Rogers said publically on Sunday that the IRS had “agents who were engaged in intimidation of political groups.” He added, furthermore, “I don’t care if you’re a conservative, a liberal, a Democrat or a Republican, this should send a chill up your spine. It needs to have a full investigation.”

Indeed there will be an investigation. To grant Rogers his “full investigation,” however, will require Congress to look well beyond the tax enforcement agency’s policies related to tea party organizations. Consider:

In a move that is astounding because it so obviously chills political speech in the United States, the IRS has delayed and may deny the awarding of tax-exempt status to Z STREET because its mission and goals contradict President Obama’s Middle East policy.

When the nonprofit, educational Z STREET, a self-described Zionist-organization, applied for tax-exempt status in 2009, the IRS demanded in writing to know “Does your organization support the existence of the land of Israel?” Where the president “strongly supports” the two-state solution, Z STREET was founded to support the state of Israel as currently recognized by the international community.

Court documents filed by Z STREET verify that the IRS maintains a special policy for organizations that are connected with Israel. The IRS informed the nonprofit organization that its application had been forwarded to “a special unit in the D.C. office to determine whether the organization’s activities contradict the Administration’s public policies.”

Z STREET should be praised for pushing back. The small organization has taken up the cause of defending itself and other organizations that may find themselves at odds with particular political beliefs of a future administration. Z STREET’s initial hearing is scheduled for July 2 in federal district court in Washington, D.C.

What is lamentable is that any nonprofit educational or charitable organization would find itself pressured by the federal government to prove that its charitable, religious, or educational goals are not incongruent with the foreign or domestic policy agenda of a sitting president.