Trending Now
You are at:Home»Featured»Apples and Algebra: First Comes the Love…
By Nic Davidson on October 4, 2012 Featured, Live in Christ, Marriage 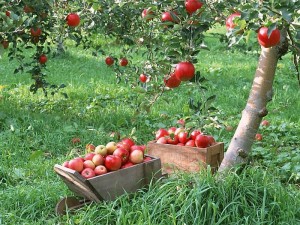 A while back, we began a 4-part exploration of the four marks of God’s love (Free, Total, Faithful, Fruitful) as explained in Humanae Vitae, and, for me anyway, it has been a good experience.  We’ve explored the true fulfillment of hippy love.  We’ve brushed up on our Latin and, consequently, our swag.  We’ve even taken a sneak peak at what Pope Paul VI might’ve listened to while he was doing the dishes.  As far as I can tell, it’s been relatively painless and fun for everyone involved.

However, when I sat down to write the fourth and final piece, I balked.  It wasn’t writer’s block; I just hesitated to go there.  The reason was simple: I want to be liked, I want people to continue to read my work, and, out of the 4 marks, this is by far the least popular.

Oh, everyone loves the first three.  Everyone wants to feel true freedom in love.  Everyone loves the idea of the significant other who is all-in.  No one wants to be discarded and replaced by someone else.  But who on earth wants to think about kids, especially in the throes of passion?  Why does reproduction have to enter into the picture at all?  Even much of the hullaballoo in the feverish climate of this election year is directly related to this fourth mark.  Whether it’s fast food, Forbes, or Facebook, our lives are inundated with issues of fruitfulness.  The real problem is that most people don’t see the connection.

So, how does one write about this controversial issue, adequately putting it into the beautiful and illuminating light that it deserves, all in a thousand words?  Well, for starters, I used up 288 of them just introducing it.  The long intro is necessary, though, because we need more than just the sum to understand the equation.  You can’t just read the last chapter of The Lion, the Witch, and the Wardrobe and expect to know why the four coats were missing from the Professor’s house, or the last chapter of any vampire novel and know where the last six hours of your life went.  I digress.

You could actually say that fruitfulness in love is, in a real sense, the culmination of the first three marks.  If you are giving yourself freely, totally, and faithfully, then it follows that life will result.  There are many varying degrees of this “fecundity”, to quote Humanae Vitae (and sound brilliant), from an overall vitality between spouses to inspiring holy marriages in people around them.  However, though these forms of life are good and desirable offshoots, the ultimate end, and “supreme gift”, of spousal love is to image the love of God, namely sharing a love so fruitful and real that “nine months later, you have to give it a name.”(Scott Hahn).

In other words, human love, IF it is a participation in God’s love, should reproduce itself.  It is no mistake that, 8 words after the creation of Adam and Eve, God tells them to “be fruitful and multiply” (Gn 1:28).  And, to clear up any confusion, He was NOT telling them to grow peaches and do math.  He gave them life, as the creative result of His love, and immediately tells them to do the same.  In the first pristine moments of Creation, when all is “very good” and there is no tainted love, God gives the first commandment in all of Scripture: essentially, “Love like I do”.  And though humanity quickly and consistently forgot His command, we were reminded once and for all in the words of Christ:  “As I have loved you, so you also should love one another.”(Jn 13:34)

This love that naturally creates is the fulfillment of Aquinas’ teaching that love is “willing the good of another”.  Indeed, love is “other-centered”, but to the utmost degree, not merely concerned with “the other”, but SO other-focused that, in the exchange of persons, it actually creates an “other”.  That is how powerful, and ultimately God-like, real love is, IF it is allowed to bear fruit.   And, as usual, it all rests on the “if”.

Yes, the sexual urge is, at the core, a desire for intimacy and communion, but, IF it is not allowed to fully image the love of the One Who created it, then it is using the language of the body to promise something that it can’t deliver.  To be truly godly, love must be in keeping with the created order, since creation itself is a direct expression of His love, and the act of sex is, in essence and nature, ordered toward creating life, sustaining it for 9 months, and introducing that life into the world.

This is clear in the fact that a man cannot experience the pleasure of an orgasm without bringing forth the possibility of creating life; for him, it’s the same moment, pleasure and creativity, love and responsibility. However, because of that very biological fact, if some aspect of the attempt at love is not free, total, or faithful, then any number of methods must be employed in order that gratification can be gain apart from the natural outcome: fruitfulness.

To clarify, this is not an attack on persons who find themselves participants in willful infertility; this is merely a comment on the nature of an act and its conformity to God’s love.  We may desire and attempt real love, but real love is ordered to reproduce itself, and IF we won’t follow through on the demands of real love, our good intentions can only bring us to the threshold of intimacy, never truly into the bridal chambers.  We limit ourselves to knocking on heavens door, but never being willing to step inside.

And believe it or not, heaven does come into play!  Ultimately, everything boils down to intimacy with God, not the person we’re trying to love.  Earthly love is intended to image God’s perfect love, not so that your spouse will know more about you or be closer to you or even love you more, but so that they know a deeper intimacy with their eternal Beloved and love Him with a fullness that carries them into eternity.  This is the cry of the Psalms: “My happiness lies in you alone”(Ps 16) and “whom have I in heaven but you?…there are none on this earth that I desire besides you”(Ps 73:25).

This life is about participating in the love of our good and caring Father, not about gaining gratification.  The ability to love in this body is a complete gift from the Creator, intended to be used in keeping with it’s created purpose.  The ability to commune with others is meant to point each other to Him.  And ultimately, even our celebration of thanksgiving (“eukaristo” in Greek) at Mass isn’t meant to be a jolly hangout of our own making; it is meant to be a communion of persons, a moment of intimacy that conceives and bears offspring in the world: “Go…make disciples” (Mt 28:?)

Brothers and sisters, let us begin to open each and every expression of love to the possibility of life.  As it is with the first three marks of God’s love, we were made to participate in the life, the fruitfulness of God, and we will never be fully satisfied until we entrust our souls, spirits, and bodies to His perfect love.  He longs to live in communion with you, giving you “life to the fullest”(Jn 10:10), and He is eager for you to give that life to the world!