Trending Now
You are at:Home»Featured»Are You Just a Mother?
By Brent Stubbs on April 16, 2013 Featured, Women 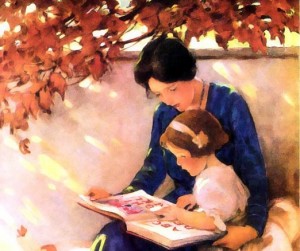 You are just a mom!

Are you just a mom?

I put a question mark at the end of that first iteration for a reason. Today, more than ever, women — mothers in particular — find themselves being questioned. A job, a vocation, that for time immemorial was immortalized in various  cultural symbols (the most contemporary or popular one being “Mother Earth”) has now become second fiddle, third chair, in the middle school band. It used to be enough, as a woman, to want to grow up and be a mother. (Enough in a very qualified sense that I will talk about in a moment, so if you are thinking about launching into the combox at this point stop yourself.) And despite our new cultural premonition, the toy doll section at Target is still chalked full of evidence that culture nouveau cannot get the traditional ghosts out of our machine.

Enemy of progress: Meme #1,493 of the Devolution

Questions. There is nothing wrong with them, but laden in every question is an assumption. To “question everything” (to parrot a popular meme) is to first assume a position in the world of judgment. Further, this position of judgment assumes a vantage that allows one to see something that no one may have seen before. Philosophical rabbit trail ended now.

Do we really know something about women today that we did not know at some other time? In some sense, we do. I would be out-of-line if I failed to acknowledge the misogynist tendency of some parts of western culture. In an apparent show of deference, we patronized women, patting them gently on the head so that they wouldn’t mess up their pretty little curls or hurt themselves on physics, politics or philosophy. That was a bad idea, and one that we have corrected. In fact, today more women are earning college degrees than men. However, I am unclear how that is a satisfying fact. Since 51% of the population in the US is women, I would not mind it being 51%, but I don’t see how women outperforming men is any more satisfying then men outperforming women.

I did not know we were in competition with each other.

Which is the assumption in all of this confusion. Fact: I, as a man, can never be a mother. I cannot file a lawsuit, start a petition on us.gov or any such hogwash in an attempt to become a mother. At this point, they have no way of transplanting a womb into my body, and I am fairly certain that women would be up in arms if someday we told them that being a mother was just a matter of hormones and organs. Meaning that even if I had gender re-assignment surgery and a transplanted womb, I am imaging a sharp objection to me being called mother — but I digress.

Let us then assume, that I can never be a mother. Good, I agree. See, we are not in competition with each other. “Separate but equal” is not an equivalent to “different but equal.” This is something that is lost in our culture. The concept that ended segregation got mixed and mashed into meaning something it did not mean. For men and women to be different, somehow, means — in our culture — that we are unequal. That is our Huge Mistake. And, if gone uncorrected, will lead to the End of Our Story.

Because, God “made them male and female.” This is not some antiquated, outmoded idea. The fact that we are stating facts like “more women today are earning college degrees then…” proves that we know there is a difference. If there was no difference, such statistics would be meaningless. So, since men and women are different but have equal dignity and worth, and since a woman is uniquely fashioned to be a mother, then being a mother is important.

Today, however, women feel like second class if they just want to be a mother. It is not enough to raise the next generation — teach them how to read, be moral agents, develop social skills, and the like. So, no wonder that today’s kids perform more poorly in school, are less moral, and less able to interact with each other in normal ways. We did it to ourselves. We did it to ourselves when we demoted motherhood from that great office shared with the Blessed Virgin and Earth itself. Now, motherhood is for the female who couldn’t cut it in law school, sell the next gizmo, or master calculus.

But, Brent, can’t a woman do both?

That’s not the point of this post. The point is for the woman who “only” wants to be a mother. Remember, “different but equal” is true, and “separate but equal” is false. The qualification of the word “only” and “just”, ultimately, will be the mark of the fall or rise of this country. When a woman’s, my wife for example, place in society as mother is elevated to the prestige of CEO, our children will thrive again. And, so will women. Why? Because we will be affirming (one of) their unique genius, their difference, and thereby gaining all that God intended in that difference. Plus, people would stop saying stupid things like, “Oh, you are just a mother.”