Trending Now
You are at:Home»Learn & Live the Faith»Apologetics»Ask Mary to Speak to Her Son
By Guy McClung on January 1, 2015 Apologetics, Evangelization, Featured, Live in Christ, MyChurchParish.com 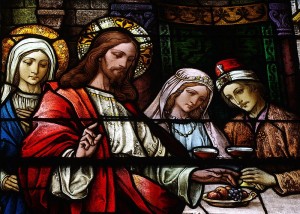 You cannot count the number of times in your life you have said these words: “Holy Mary, Mother of God, pray for us sinners now and at the hour of our death, Amen.”

Why do we do this? Why ask Mary to pray for us? Many say “No need to get the Mother involved, just go straight to Jesus with whatever you need.”

When our fourth child, Sarah, was born a most remarkable thing happened. Karen, my wife, had no drugs or anesthesia during labor and delivery and Sarah was born alert and quiet. She did not cry once. She laid there on Karen’s tummy, head erect, looking around the room at whoever said something. But if Karen spoke, she immediately swung her head around and looked directly at Karen. Karen’s voice was the voice she had heard for months, the voice she knew better than that of any other person.

Research shows that pre-born babies not only hear their parents’, especially their mother’s, voices, but they come to know them, recognize them, and respond to them long before birth. Any mother can tell you that as children grow, they can still pick their own mother’s voice out of a noisy crowd.

Both before He was born and after, Jesus heard the voice of Mary more than any other voice on earth. Her voice was for Him the voice of comfort, care, tenderness, and love. He heard her voice while He was in her womb, while He was growing up, during His passion and suffering, and while He was dying on the cross.

Her voice was not for Him the voice of love simply because He was God and she was sinless, but because He was her baby, her toddler, her child, her teenager, her young man. She was the God-bearer for nine months and the Christ-mother all the way to Calvary.

Considering the recounted words and speeches of so many persons in the Bible, there are relatively few words of Mary quoted verbatim. But the story of Jesus’s first miracle at Cana does quote a conversation between them. It is a story of Him hearing her voice and how He responds to it.

Jesus said to her, “Woman, how does your concern affect me? My hour has not yet come.”

His mother said to the servers, “Do whatever he tells you.”

Now there were six stone water jars there for Jewish ceremonial washings, each holding twenty to thirty gallons. Jesus told them, “Fill the jars with water.” So they filled them to the brim. Then he told them, “Draw some out now and take it to the headwaiter.” So they took it.

And when the headwaiter tasted the water that had become wine, without knowing where it came from (although the servers who had drawn the water knew), the headwaiter called the bridegroom and said to him, “Everyone serves good wine first, and then when people have drunk freely, an inferior one; but you have kept the good wine until now.” Jesus did this as the beginning of his signs in Cana in Galilee and so revealed his glory, and his disciples began to believe in him. (John 2)

Mary has not asked for something for herself. She is asking for the newly-married couple, probably friends or relatives of Mary and Joseph. She knows who He is, she knows His power, and she knows she can ask Him on behalf of the bride and groom and their families. How many of us would have even noticed what might have proved very embarrassing for the families or tried to do something to help them?

Mary intercedes for the newlyweds and after Jesus responds to Mary, we do not know what else, if anything, passed between them. Perhaps Mary smiled, perhaps Jesus returned that smile. Perhaps, after He realized that He could not refuse His mother, He sheepishly said the equivalent of “Aw, Mom, okay. I will do as you ask.”

Jesus already knew the wine had run out. He does not need Mary to tell Him this, but in the story of this miracle Holy Scripture is teaching us that Mary can intercede for us. When Mary pleads for us, her pleading can result in a miracle. How Jesus responds to her lets us know how He will respond if she is our advocate before Him now. He does not simply make a few jars of wine to defuse the social crisis. He provides gallons and gallons of the finest wine and He can do the same for us at Mary’s bidding.

Nowhere in the Bible, Old or New Testament, does Scripture tell us to always and only pray directly to God. For that matter, there are numerous instances when someone approaches Jesus and asks Him, sometimes implores Him, on behalf of another person to cure, or heal, or even raise from the dead. Jesus did not need these intercessors. He was fully aware of each person who was in need and what they needed.

Still, divinely-inspired Scripture presents to us case after case of one person in essence praying to Jesus for another person. These include the father with a possessed son, the centurion with an ill son, and the synagogue official with a dead daughter. Four men bring to Jesus a paralytic who could not come himself. Jesus sees not the faith of the paralytic, but of the four men, and then cures the paralytic. The man who was deaf and dumb did not come of his own accord, but was brought to Jesus by others. Martha and Mary beseeched the Lord to come when Lazarus was sick.

Of all the situations in our lives in which we need or want someone else to ask for us, someone else to intercede for us, to speak for us, perhaps in dealing with God, perhaps because we are ashamed or are focusing on our unworthiness, it might be a good idea to get the best person for the job. Ask the one who happens to be sinless, especially if we think our words are inadequate or we are unworthy. And why not have the request done in the voice He knows best?

Jesus knows Mary’s voice and He cannot refuse her. Let her tell Him you have no wine.