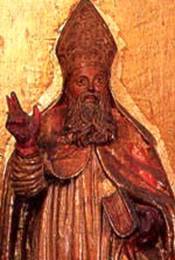 IN spite of family troubles and delicate health, Fulgentius was appointed at an early age procurator of his province at Carthage. This success, however, did not satisfy his heart. Levying the taxes proved daily more distasteful, and when he was twenty-two, St. Austin’s treatise on the Psalms decided him to enter religion.

After six years of peace, his monastery was attacked by Arian heretics, and Fulgentius himself driven out destitute to the desert. He now sought the solitude of Egypt, but finding that country also in schism, he turned his steps to Rome. There the splendors of the imperial court only told him of the greater glory of the heavenly Jerusalem, and at the first lull in the persecution he resought his African cell.

Elected bishop in 508, he was summoned forth to face new dangers, and was shortly after banished by the Arian king, Thrasimund, with fifty-nine orthodox prelates, to Sardinia. Though the youngest of the exiles, he was at once the mouthpiece of his brethren and the stay of their flocks. By his books and letters, which are still extant, he confounded both Pelagian and Arian heresiarchs, and confirmed the Catholics in Africa and Gaul.

An Arian priest betrayed Fulgentius to the Numidians, and ordered him to be scourged. This was done. His hair and beard were plucked out, and he was left naked, his body one bleeding sore. Even the Arian bishop was ashamed of this brutality, and offered to punish the priest if the Saint would prosecute him. But Fulgentius replied, “A Christian must not seek revenge in this world. God knows how to right His servants’ wrongs. If I were to bring the punishment of man on that priest, I should lose my own reward with God. And it would be a scandal to many little ones that a Catholic and a monk, however unworthy he may be, should seek redress from an Arian bishop.” On Thrasimund’s death the bishops returned to their flocks, and Fulgentius, having reëstablished discipline in his see, retired to an island monastery, where after a year’s preparation he died in peace in the year 533.

Reflection.—Each year may bring us fresh changes and trials; let us learn from St. Fulgentius to receive all that happens as from the hand of God, and appointed for our salvation.