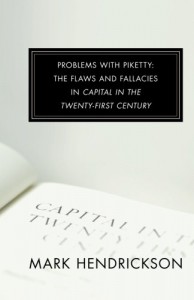 French economist Thomas Piketty’s Capital in the Twenty-First Century was the most talked about treatise on political economy in 2014, if not the 21st century. To those of us who understand and respect the superior productivity and fairness of free markets, the errors throughout Piketty’s Capital were so numerous and obvious that the book was easy to dismiss as warmed-over leftism, hardly worthy of being addressed and refuted. The history of economics teaches us, however, that it can be a costly mistake to ignore a popular book however flawed and wrong-headed.

When John Maynard Keynes published The General Theory of Employment, Interest and Money in the winter of 1935-36, its fundamental errors were so glaring to the Austrian economist Friedrich Hayek that Hayek figured the book would quickly slip into oblivion. Wrong! By the time Henry Hazlitt wrote the first systematic dissection and demolition of The General Theory in 1959 (The Failure of “the New Economics”) Keynes’ macroeconomic errors had become the orthodoxy.

With the Keynes/Hazlitt precedent in mind, I decided to give Piketty’s book a thorough going over. The result, published in November by the Center for Vision and Values at Grove City College, is a concise book (slightly under 100 pages) entitled, Problems with Piketty: The Flaws and Fallacies in “Capital in the Twenty-First Century.”

Here are some of the main points:

The list above is not exhaustive, but hopefully shows that Piketty’s mistakes are not trivial, but fundamental and not rare, but pervasive.

If you know of a college student or adult with an inquiring mind who wants to understand what divides free-market economists from the progressive political agenda, Problems with Piketty is a helpful place to start.