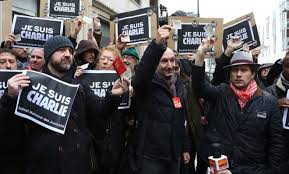 Editorial cartoons are an effective means of making a point briefly but powerfully. However, cartoons become increasingly unjustifiable when they degenerate into vulgarity, calumny, or blasphemy.

“God is not mocked” (Galatians 6:7). The satirical magazine based in Paris, Charlie Hebdo, makes a business of mocking Islamic themes and portraying Mohammed in pornographic poses. And not just Mohammed. In unspeakable ways Charlie mocks what Christians consider sacred, including Jesus and the Holy Trinity. Thus the offensiveness of Charlie Hebdo is not just freedom of expression, but provocative violation of the Golden Rule.

“Every religion has its dignity,” said Pope Francis in response to questions about the massacre in Paris; and to mock or to toy with other people’s religion is to “provoke” violence, he said. Even a co-founder of Charlie Hebdo agrees with the Pope on this point. Henri Roussel says that the recently murdered director was “an obstinate blockhead” who “dragged his team to their deaths.”

Americans caught up in shouting slogans about press freedom and inanities about “theocracy” might try reciting the Preamble to the US Constitution: Among our main purposes as a nation is to “insure domestic Tranquility.”

Far from urging the media to apply the Golden Rule for the sake of social peace, however, demonstrators numbering some 3 million in France have celebrated the late Charlie Hebdo publishers as heroes, as someone with whom to identify. Everywhere in France, people displayed placards and posters with the catchphrase, Je suis Charlie. These three words should be seen for exactly what they mean, “I am Charlie.” Put another way, not only do we stand with anti-terrorist forces, but we embrace what Charlie Hebdo transmits to France and to the world.

What values are in fact communicated? In addition to the anti-censorship mantra, “the spirit of Charlie is the right to blasphemy,” this according to the magazine’s own attorney, Richard Malka.

If I am Charlie, then it follows that I embody Charlie’s values. What a devilish coup that so many citizens of a once Catholic nation would say to the world, in effect, “we too are blasphemers! We too are Hebdo hellions!” Hopefully God will forgive such Frenchmen “for they know not what they do” (Luke 23:34).

Being a sin against the virtue of religion and of faith, blasphemy was punished – sometimes severely – in Europe and in America until Christendom began giving way to secularism during the late modern era. In France shortly after Charlemagne, the Frankish government enacted a law declaring blasphemy a capitol offense. St. Pius V, the pope who inspired the victorious counter-jihad at Lepanto, 1571, provided in his Cum Primum Apostolatus (p. 10) that blasphemers be fined. The fine was increased upon a second offense, and after a third the blasphemer was sent into exile. The punishment for clerics found guilty of blasphemy might upon repetitions include imprisonment, being defrocked, and even being sent to the galleys.

Of course terrorists are not Holy Roman Emperors, or saintly Popes, or avenging angels of light. They are vigilantes devoid of authority. The men who perpetrated the massacre in Paris acted without so much as an authoritative intra-Islamic commission; they went on their killing spree without anything like the 1989 fatwa issued by Ayatollah Khomeini ordering Muslims to kill author Salman Rushdie for his Satanic Verses.

Here is the essential nuance in Catholic thinking: When zealots act on their own without superintending authority, they cross the line between guerrilla warfare and plain murder.  They are acting not as commandos but as rogue killers. 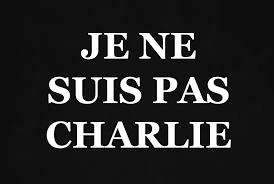 I am not Charlie

But the sad reaction, Je suis Charlie, is, I suggest, visceral rather principled. Gut-deep antipathy to enforcing morals explains why secularists would see the legalization of blasphemy as a milestone in their liberation from religious standards. The last thing they want is suppression of sin, as with the old anti-blasphemy laws. Indeed militarist secularists hate with a passion any sort of repression that might chill a libertine society – for example outlawing pornography, abortion, euthanasia, and same-sex-marriage.

In addition to the twisted values implicit in the slogan, Je Suis Charlie, there are prudential issues. As Bill Donohue of the Catholic League puts it, “Muslims Are Right To Be Angry.” Any prudent journalist would know that if you keep poking a tiger with a stick, you are liable to get bitten. Without approving it, Pope Francis said “it’s normal, it’s normal” to react violently in the face of such provocation.  As Patrick Buchanan puts it,

Even as children you knew there were words you did not use about someone else’s girlfriend, mother, family, faith or race, if you did not want a thrashing.

To avoid being victimized is often a simple matter of caution and consideration of the other guy. Provoking the Islamic world by publishing pornographic portrayals of Mohammed is foolhardy and provocative; it is setting yourself up for victimization. Saying that Charlie Hebdo did not in any way goad Islamic people and incite them to murder is hard to reconcile with clarity in understanding the Islamic mindset.

Other prudential considerations: What about the two policemen who were killed as a direct result of the peril introduced into Paris by Charlie Hebdo’s provocation of Islam? What about the reservoir of ill will, filled to overflowing, among the 4.7 million French citizens (7½ percent of the population) who happen also to be Muslim? And finally, what about the lack of common sense in eliminating anti-blasphemy laws and freeing up cultural arsonists to conflagrate society?

Here in the United States, anti-blasphemy laws have stood for most of our history.  Such legislation is still on the books in some states, although SCOTUS overruled New York State’s anti-blasphemy law in 1952. In the process of rolling back judicial usurpation, let America offer France a good example by restoring and enforcing laws against setting diabolical fires (not only blasphemy) within the culture and throughout society.