Trending Now
You are at:Home»Learn & Live the Faith»Apologetics»Atoms Are Imaginary
By Michael Baruzzini on January 27, 2012 Apologetics, Featured, Science 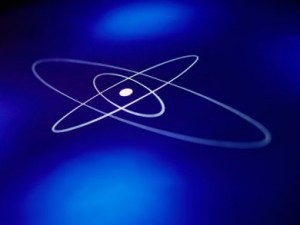 “For now we see in a mirror dimly, but then face to face. Now I know in part; then I shall understand fully, even as I have been fully understood”  — 1 Corinthians 13:12.

A group of atheists in Colorado are putting up the newest version of their billboard messages, this time proclaiming that “God is an imaginary friend.”  Though the intention of the message is to wrongly imply that God is unreal, there is at least one point in which the atheists are correct. God is imaginary in this sense: that we must use our imagination to picture Him. God cannot be seen directly in this life, and beholding God directly is itself the essence of the happiness of Heaven. Until then, we must know Him indirectly and, in the words of Saint Paul, we see Him as “in a mirror dimly.”

Let me explain what I mean. We know ordinary things by apprehending them immediately with our senses. For example, you can see and touch the desk in front of you. Our senses, however, are limited, and there are many things that they cannot directly detect — things such as atoms. These sorts of things we know not by immediately apprehending them with our senses, but rather by inferring them indirectly through their effects. Atoms are in this category. Atoms are known from a distance.

You might object that we know atoms because we can feel them. Tap on your desk — it’s made out of atoms. There they are, plain as day. Except that it’s not plain as day. The only reason we know that things like desks are made out of atoms is because scientists have done very precise, controlled experiments and made very careful observations of effects that have allowed them to infer what atoms must be like. Yet atoms are not really like your desk at all. An atom that is part of your desk behaves very differently than your desk behaves. Your desk is immediately apparent to your senses; its atoms as such are not.

Yet you are nevertheless justified in believing that your desk is made out of atoms, and in believing that the features that belong to your imaginary picture of atoms are true. The experiments and observations that have led to the conclusion that atoms exist, and given us some idea of their properties, have been tested and supported by years of scientific research. You can’t see atoms, but you can know by their effects that they exist and what they are like. You can, if you wish, imagine them, picturing protons and electrons whirling about in space. Your imaginary atom, however, is not a real atom. It is based on a real atom, and it contains abstracted truths about real atoms, but it remains, at heart, a reconstruction in your mind. Still, the fact that atoms are known only through their effects and not directly doesn’t make them unreal.

Approaching God with the intellect is similar. Unlike either desks or atoms, God is not a material being. Unlike the desk, He cannot be apprehended by the senses directly. However, like atoms, God can be known through His effects. The evidence for atoms is scientific, and includes the results of a whole body of laboratory experimentation and observation. The evidence for God is philosophical, historical, and personal. It is found in the arguments that show the need for a Creator and an Absolute Being at the base of all reality; it is found in the historical witness of Christ and His Miracles; it is found in the evidence of the saints and the changes that grace can make in the lives of the faithful.

We cannot behold God directly, in this life at least. In our earthly state, it may very well be the case that our earthly images of God must be contained in the imagination — but then so are the vast majority of our scientific images as well. The important question isn’t whether God is as apparent as ordinary material objects, any more than it is important for science that atoms be apparent to the senses. The important question is whether the evidence for these things exists. In both the cases of atoms and God, the evidence is overwhelming.