Trending Now
You are at:Home»Featured»When Media Bias is Subtle
By Bill Donohue on January 27, 2012 Featured, On Media 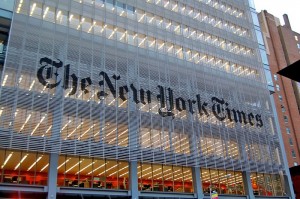 The reason I read the New York Times every day is because of its comprehensive coverage and tremendous influence on other media outlets. Editorially, at least on cultural issues, the positions of the New York Times are diametrically opposed to the teachings of the Catholic Church. They are entitled to their opinion. What bothers me are the subtleties of bias that creep in, as in today’s edition.

In the “Arts, Briefly” section today, there is a story on how some of India’s Sikhs are angry at Jay Leno for making a disrespectful joke about their religion. The piece begins by saying, “It’s the rare Jay Leno joke that results in ruffled feathers in the United States.” Really? I guess the reporter, Dave Itzkoff, never heard of one of Leno’s endless stream of jokes painting all priests as predators. [By the way, Leno is so relentless in bashing priests that we prepared a report detailing his offenses from April 29, 1996 to February 4, 2010 and sent it to NBC executives.]

When someone dies who may have had a checkered past, it is not unusual for a news story to cite the comments of his adversaries. And while an obituary may quote a critic of the deceased, it is highly unusual to see the remarks of an official from an advocacy organization make that page. Yet in today’s obituary on Archbishop Robert F. Sanchez, Dennis Hevesi allows a spokesman from a notoriously anti-Catholic group, SNAP, to hammer the late archbishop. [We issued a report on SNAP last year demonstrating its open hostility to the Catholic Church.]

Finally, tens of thousands of Catholics, led by many bishops, turned out yesterday for the annual March for Life in Washington, D.C. There was no story about it in the New York Times. Yet when a few dozen “Occupy Wall Street” protesters were camping out, the Times had plenty of room to cover them, pictures included. By the way, the Washington Post has a front-page story on the March for Life in its B section today.