Trending Now
You are at:Home»Learn & Live the Faith»Catechesis»Avoiding the Climax of Intellectual Stupidity
By Trent Beattie on December 27, 2013 Catechesis, Evangelization, Featured 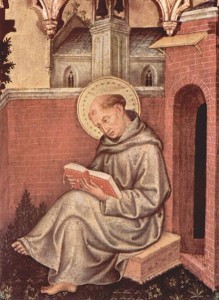 Until relatively recently, atheism just seemed to me like a phase for confused college students—usually nothing to be taken seriously, only something to be outgrown. However, atheism has become more pernicious in recent years.

Aside from those who are going through a phase of “amateur atheism” occasioned by trendiness, myopic biology professors, or tough situations in life, there are others in what can be called “professional atheism”. This is not the atheism of those who work, but of those whose work is atheism—at least in part. These atheists go about attempting to convince anyone who will listen that God doesn’t exist.

Regardless of which camp they come from, atheist arguments can initially seem impressive. There’s no need to fear, however, because these arguments do not survive close examination. Take, for example, a question asked by countless souls through the centuries: “How can a good God allow so much evil and suffering to exist?” Atheists don’t ask the question in the hope of getting an answer, but instead, they use it as ammunition against God.

What Patrick Madrid and Ken Hensely point out in their 2010 book, The Godless Delusion, is that the question is, believe it or not, actually a proof for the existence of God. After all, if everything could be explained through material processes—a position which atheists hold—then where did the idea of good or evil come from? If there’s nothing around us but matter, and no Ultimate Standard against which we can measure human actions, what basis is there for deeming any act or situation good or evil?

Those who say we are result of random evolutionary events contradict themselves when they complain of “evil” in the world, because evil can only come about through the absence of a due good. Yet what is morally “good” in a world that has no room for anything higher than physical matter? As Madrid and Hensley state, “if God does not exist, you have no basis higher than your own private preferences for labeling [certain actions]as ‘evil’ or demanding that people not do those things.”

So the question about the problem of evil is only something those who believe in God can legitimately ask. Those who don’t believe in God, really have nothing to fall back on while attempting to explain how moral goodness–which cannot be empirically measured–can at the same time come from matter.

In fact, the atheist, if he were true to his disbeliefs, would not even be able to claim those disbeliefs are true, because the reliability of ideas themselves would be called into question. Under a materialist view of the world, our ideas are mere chemical reactions. What bile is to the liver, thoughts are to the brain according to the atheist worldview. How, then, can it be determined that anyone’s thoughts (or brain products, if you will) are more accurate or reliable than anyone else’s?

If more atheists actually lived out their beliefs on a consistent basis, chaos would reign. There would be no moral standards; every action would be acceptable. Everywhere we looked, we would see (and perhaps fall victim to) the atrocities that have taken place under atheist dictators around the world.

Amateur and professional atheists alike should realize that atheism is illogical, and that to live it out actually means to live an evil life. That may sound harsh to atheist ears, but when you take away the Source of all goodness, you only have the greatest lack of a due good that could ever be imagined. In other words, you have the greatest evil.

If you don’t believe me, take it from Venerable Solanus Casey (1870-1957). He was a modern-day St, Francis of Assisi: humble, generous, and compassionate. This gentle soul spent hours every day listening to people discuss their problems. He would give them advice, pray for them, and sometimes even work miracles in their lives. In short, he truly loved those he served.

So what did he say about atheism?

Put on your seatbelt.

Venerable Solanus said, “Atheism is the very climax of intellectual stupidity, moral insanity, or…devilish perversity. The height of insanity is not to believe in God, for only a fool says in his heart that there is no God (cf. Psalm 14:1), when the Heavens and the earth proclaim his glory. Atheism robs man of hope—the very soul of happiness.”

Despite its allure for some, atheism is a miserable dead end. All atheists, whether amateur or professional, would do well to realize their folly today, turn around, and get back to the God who loves them. There is still time.