Trending Now
You are at:Home»Featured»Be a Sporting Christian: See “42”
By Robert Struble, Jr. on May 7, 2013 Featured, On TV and Movies 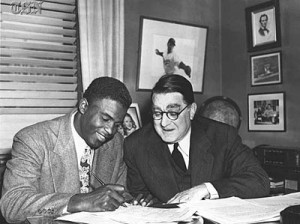 The older the script, the more likely it is that Hollywood will produce a good and uplifting film. The newest version of the Jackie Robinson saga, entitled simply “42,” is well worth viewing twice. I took my wife the 2nd time, and she loved it too.

Living as we do in times dominated by the likes of Obama and Biden, it bolsters the morale to recall an era when righteousness was on the rise. Robinson, played convincingly by Chadwick Boseman, and Branch Rickey, played brilliantly by Harrison Ford, were the sort of low key heroes that gave greatness to the America of my youth.

Putting his Christian faith into action, Rickey opposed high ideals to sordid realities. In seeking to apply the Lord’s Prayer, “thy will be done, on earth as it is in heaven,” Rickey lived out Teddy Roosevelt’s admonition, “keep your eyes on the stars and keep your feet on the ground.”

Rickey fielded fellow Methodist, the 26 year old Robinson, and asked him, or rather prodded him, to exhibit guts and to endure injustice and personal abuse as he broke the color barrier. Rickey’s ultimate aim was to elevate the game of baseball, and in the process to leaven society at large. Robinson was his instrument, portrayed as following in the footsteps of “our Savior,” to cite Branch Rickey’s quiet allusion.

In Rickey’s day, racism permeated the sport of professional baseball, which was then the national pastime. Baseball was strictly segregated into negro and white baseball leagues.

The country’s racism extended far beyond sports, as told in the film by various examples, including segregated lodging, separate restroom facilities, and Robinson’s court-martial for refusing to sit on the back of an army bus. Eight decades earlier, racism had been weakened but far from eradicated by the Civil War, and by the leadership of the Great Emancipator, Abraham Lincoln. 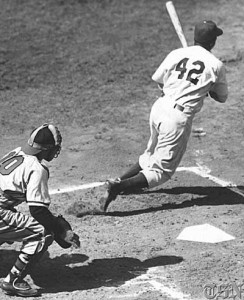 Rickey had watched the lingering injustice in play during his younger years in baseball, well before WW II; and by his own admission, he’d done too little to resist it. In his older years Rickey determined to use his position as owner of the Brooklyn Dodgers to make up for his lost opportunity by admitting blacks into major league baseball. He sought to salve his conscience, and at the same time bring his team to the World Series; meanwhile to sell more tickets (which indeed the Dodgers did).

The film also develops the theme of players who are not social activists, but ambitious young athletes, dragged unwittingly into a culture war. Their varying reactions make for insightful and entertaining views of human nature confronted with the choice of defending or of rethinking an inherited prejudice.

There is no ambivalence, to be sure, on the part of Ben Chapman, the arch-racist manager of the Philadelphia Phillies, depicted darkly but ably by Alan Tudyk. In personifying the down side of American society, he exudes on screen a soul-deep foulness that reminds one of the unclean spirits described in Revelation 16:13. Also, the film gives us a fleeting glimpse of bigotry passed on from a father to his young son.

The film does not, however, attempt to develop the contrast with justifiable discrimination rooted in theological and moral truth. Nor does it address the current culture war against “the laws of nature and of nature’s God” (Declaration of Independence), even though the timing of this film (2013) begs the inevitable comparison with liberation movements of our own day.

In the 19th century, emancipation was a long fight led primarily by Christian reformers like William Wilberforce in England and William Lloyd Garrison in the United States. The 20th century Civil Rights movement in the USA can be said to have began with Rickey and Robinson. Martin Luther King followed soon after. Their efforts were directed against the last throes of a centuries-old crime against humanity, rooted historically in one of the worst social sins ever to plague mankind, the African slave trade to the New World.

By contrast, take the campaign for “marriage equality” so ubiquitous at this writing. It seeks to revive an ancient sin from the place of obscurity wherein it has resided since pagan antiquity. The movement is, alas, in the process not of eradicating evil (as with Rickey, Robinson and Rev. King), but of exalting immorality as a social paradigm and honoring it with government issued certificates of approval. Not even ancient Greece or pre-Constantinian Rome afforded the sin against nature such a lofty status.

In the film the omission of this issue is quite fortunate, in that Hollywood would no doubt have botched it up badly. It might have ruined an otherwise wonderful film by attempting to tie progressivism in the late 1940s with the movements in our own time on behalf of abominations like abortion, same-sex-marriage, and radical secularism. Yes, sometimes silence is golden and gaps blessings! Thank you Brian Helgeland, writer and director of “42,” for omitting such incongruous themes. 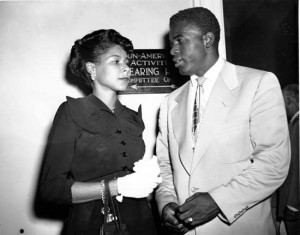 One endearing and tender theme that graces the film is the love affair between Jackie Robinson and Rachel (Isum) Robinson, played by the beautiful and talented actress, Nicole Beharie. Jackie and Rae met as students at UCLA in 1941, were engaged in 1943 and married in February, 1946, a few months after Jackie’s recruitment into previously all white baseball by the Brooklyn Dodger organization.

Helgeland treats their conjugal matters with the same discretion as was routine in films during the 1940s. The same, unfortunately, cannot be said about the adulterous affair involving manager, Leo Durocher, played by Christopher Meloni.

For moral support during his persecution on and off the field, Robinson relies on his Christian faith and on his spirited wife; also on the negro sports reporter, Wendell Smith, played solidly by Andre Holland. The film also features classic radio sports casting in the person of the late Red Barber, brought to life superbly by John C. McGinley.

Lucas Black gives an inspiring performance in the part of Pee Wee Reese, the hall of fame shortstop and Dodger superstar who took Robinson under his wing. Reese’s kindness was also an act of bravery, going against pressure from some of his teammates and from his own family in Kentucky.

The film, “42,” is a must see. Bring your family, and some kids. For role models, young people need courageous heroes and mature adults who exhibit high ethics. These qualities and standards would greatly upgrade the sporting scene today, and indeed every aspect of postmodern society.