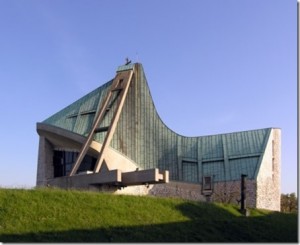 Church of St. John the Baptist by Giovanni Michelucci

The first step in renewing architecture in the Catholic Church is to make a commitment to the truth. As the Church teaches, Truth is a person, not a concept. We know the “Truth will set us free,” and so it is our desire to be free from any and all erroneous beliefs that enslave us.

Architecture is defined in almost as many different ways as there are people.  But hopefully we can all agree that it has both a scientific and artistic component.  It certainly involves using available technology in solving functional problems as is witnessed by every built structure, and concurrently, each architect makes decisions regarding the quality of the space, which may lead one to a spiritual or at least we can agree, an intangible experience.

Let’s consider a church for example.  Two churches may have the exact same floor plan.  One could be enclosed with four walls and a flat ceiling while the other has windows and an inclined ceiling.  Both could have the same number and kind of pews and identical liturgical furniture, but the experience and quality of the space would be very different.  So it is safe to say we are talking about how space is defined.  This is also what Pope John Paul II said in his Letter to Artists in 1999:

“The Church needs architects, because she needs SPACES to bring the Christian people together and celebrate the mysteries of salvation.”

It is clear that the Holy Father understood that fundamentally architects are designing, or more specifically, defining the quality of the spaces they determine.  Beyond satisfying the functional needs, the quality of the space and the experience one has, moving through these spaces can have a transcendent quality. The Holy Father reinforces this idea of architecture having a functional component, or needs to be satisfied, as well as a spiritual or intangible quality when he says the following:

“Not infrequently these architects have constructed churches which are both places of prayer and true works of art.”

The materials used also affect the experience one has.  Anyone who has been to Italy and then goes to a ‘plastic’ replica in Orlando or Las Vegas can tell you that while they look very much the same, they are in essence totally different.  Standing inside the replica, one notices that the temperature and humidity are controlled and comfortable, or ‘fabricated’ to create the ethereal sense associated with the original.  The sound of one’s voice is different in the replica.  In short, the replica is a superficial copy of the original. But there are other considerations.  The environments in which the original and replica are built are not the same.  The people who built the two ‘versions’ couldn’t be more different.  They come from two different time periods, often separated by centuries.  Their language, hopes and aspirations are different.  In short, their cultures are very different.

Another important consideration is that the materials and technology used in one period of time often become economically impossible to duplicate because those craftsmen no longer exist. There are still craftsmen, but they work with different materials or use the same materials but with different techniques associated with our times and our technology. Some techniques last longer than others. Others disappear and are no longer justifiable from an economic and, consequently, moral perspective.

One quick example to clarify this point; in Italy, where I worked for many years, there was a wall-finish technique called “incausto.” Incausto or encausto, suffice it to say, is an old wax-plaster technique that is quite extraordinary. It has a wonderful tactile quality that a normal plaster wall does not have. Because it required skilled labor to prepare and apply, it became prohibitively expensive to specify on the vast majority of architectural projects.

Not so many years ago, an inventive Italian developed ‘incausto in a box’; a modern and very affordable way to duplicate the original effect. There is a moral obligation to use money wisely. If a modern material and technique is available that can achieve the same result, it would be considered wasteful to use an outdated and more expensive technique.

With that in mind, consider what Fr. Schouppe says about art in an excerpt from his book Purgatory.

“A painter of great skill and otherwise exemplary life had once made a painting not at all conformable to the strict rules of Christian modesty.  It was one of those paintings which, under the pretext of being works of art, are found in the best families, and the sight of which causes the loss of so many souls.

True artisan inspiration comes from Heaven, which elevates the soul to God; profane art, which appeals to the senses only, which presents to the eye nothing but the beauties of flesh and blood, is but an inspiration of the evil spirit; his works, brilliant though they maybe, are not works of art, and the name is falsely attributed to them.  They are the infamous productions of a corrupt imagination.”

In the next article we will define tradition and nostalgia in light of the teachings of the Catholic Church and how ‘neo-neo classicism’ reflects this corrupt imagination. It is important to understand that this grave error can be committed by any architect who employs any ‘style,’ but those who are re-presenting neoclassical architecture for the third or fourth time in history, commit this grave error almost by definition.