Trending Now
You are at:Home»Featured»Be Still My Soul (Healing in the Fire, part 6)
By Mark Davis Pickup on July 27, 2012 Featured, Live in Christ 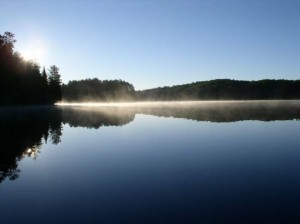 I considered not including the first part of this posting. It’s too incredible for most people to believe and so I rarely mention it, but it’s absolutely true.  It happened. I decided to include it to illustrate God’s hand over my life.

In 1982, there was a recession in Canada and I became unemployed. I began an aggressive search for employment; after all, I had a wife and two children depending on my ability to generate an income. There were no bites from potential employers and I was growing increasingly desperate for work. In the middle of my daily job search, a strange thing happened. I went dead from the waste down. I could walk fine but could not distinguish sensations — blunt from sharp or cold from hot. It felt like a spinal anesthetic. My doctor thought I pinched a nerve.  Although it was unnerving (pardon the pun), it didn’t deter me from my active job search.

One evening when I arrived home from my job search, my wife said a man called from some charitable organization to arrange an interview for a job vacancy they had. Perplexing. I had not applied for a job with them in my daily job search and I couldn’t remember being in contact with them. With no other job prospects, I called the man back and arranged an interview. I did not know what the job was but my curiosity was killing me. How did this guy get my name?

Prior to the interview I asked the Lord if this was what He wanted me to do. The answer was Yes. It seemed unlikely that I would get a job with a charitable organization because I needed a salary higher than I thought most organizations could afford to pay. But the Lord knew what I needed so I went for the interview. While sitting in their reception area waiting to be interviewed, I remember wondering about the loss of sensation in my legs.

It was the strangest interview I’ve ever had. I told the Chairman of the organization why they would not want me. He told me they did. Somehow they got a copy of my resume (I could see it on his desk). Despite me telling  him I knew nothing about their charitable organization and nothing about the disease their organization represented, I was offered the job of Client Services Coordinator for the Multiple Sclerosis Society at exactly the salary my family needed to live (right to the dollar)! With no other jobs on the horizon, I accepted the position.

At the end of the interview, curiosity got the better of me so I asked where they got my resume. The Chairman of the Board said it was the oddest thing: They were moving their offices. He was overseeing the task. When the movers were moving the filing cabinets, they heard something fall behind a particular cabinet as they pulled it away from the wall. The Chairman looked behind the cabinet and found my resume and a letter of application dated nearly four years earlier for a vacancy of their Executive Director. Apparently when I applied for the job, a clerk was filing resumes of applicants. My resume must have fallen behind the cabinet, unnoticed by the clerk, and lodged halfway down. There it sat for four years until the file cabinet was moved. When the Chairman looked at my old resume he thought I had the skills they needed for a vacancy of Coordinator of Client Services. He got my new telephone number through “Information” and called me. (Incredible, I know, but there you have it.)

I was only able to take the stress of that job for six months. The deadness in my own legs disappeared as quickly as it came and I forgot about it; I did not associate that experience with what I was seeing in other people. For six months I saw the worst of MS:  Young people’s careers and lives destroyed, their marriages break, and their aspirations shatter as MS ravaged their bodies.

I remember the broken-hearted parents of an 18 year old girl with a grisly version of chronic progressive MS. It was so bad she was in a wheelchair six months after being diagnosed, bedridden within a year, and blind at 18 months. I met her desperate parents near the end of her life. They were clinging to the hope of a remission to stop the steep and unrelenting slide of their daughter. It never came. Their beloved daughter died.

Another lady diagnosed with a rapid degenerative version of MS was confined to a wheelchair with a few months of diagnosis. In quick succession, her husband left her and took their only child with him. Then the woman’s father died of cancer. Have you ever heard a human cry from the deepest part of a broken heart? She had that cry. It’s almost primordial. She was inconsolable.When I met her she said she wanted to die and all I could do was look at my shoes.

I saw that sort of extreme MS grief every week! I couldn’t take it and left that job after six months and went to the cushy Canadian federal civil service. I remember asking God what was the point of that depressing experience. I would soon find out.

In March of 1984, the deadness in my legs returned. Again my doctor thought it was a pinched nerve. Then, I lost the use of my right arm and hand and couldn’t even hold a pencil. My doctor referred me to a neurologist who performed a number of tests. One day during the process, as I was laying on the gurney in the hospital, I asked the neurologist what he thought it might be. As casual as could be, he said he was pretty sure it was multiple sclerosis then walked out of the examining room. It was like somebody kicked me in the chest.

He answered immediately and directly. I could have sworn His answer was audible: “YOU ARE MINE.” I remember thinking, “What kind of answer is that? You are mine?”

At that moment, as in my bedroom as a child, I was engulfed by a sensation of Divine Joy in complete contradiction to my circumstances. It overwhelmed and quenched the terror within me.

I subsequent weeks, I came to understand that nothing happens that God does not allow. Nothing slips by His attention. He was allowing this to happen to me for my own good. He was changing me to be more like Christ and less like me — just as I asked when I gave my life to him. God was and is preparing me for eternity.

One night about two years after being diagnosed with aggressive MS, I had a dream. I dreamed I was a boy again, running, jumping and playing with other children. In my dream, I relived care-free days as a willowy and agile child, playing outside on hot summer evenings, until it was time for bed. (The dream was so real!) I could feel the wind in my hair and hear the playground sounds and other children’s laughter (children all encroaching sixty now). I could smell my own dusty, sweaty self having fun and a rush of childhood Joy.

I awoke longing for those wonderful days. The only thing left of my dream was stimulated memory. My heart was warm from the fast-fading essence of Joy like the faint aroma of perfume that lingers in a room after a beautiful woman has left. My head rested on the pillow wet from tears, my half-lead body convulsing with sobs.

My tears were responding to grief, but also to Joy. Those tears only foreshadowed many to come as I travelled a grief journey, along with my family. During those dark days, months and years with MS, the frequency of raids of Joy multiplied with my increasing disability. These visitations of Joy would come without warning, originating from far beyond me.

It was important to grieve because the person I had been was gone as surely as if he died. Those who loved me needed to grieve, too, but I felt sorry for them because they did not have the accompanying Joy (at least that they spoke about).

I would spend weeks, months, and even years convalescing. I don’t know if I could have endured it had it not been for the very real presence of Christ, a supportive family and a Christian community of concern.

Even during my darkest times, I would experience inexplicable visitations of Joy in complete contradiction to my circumstances. The visitations eventually subsided and were replaced with a rising contentment to simply have Christ with me. My physical state became less important, my soul became still to know the Lord was/is at my side despite griefs and sorrows.

With these last words, I want you to enjoy a shortened version of the hymn Be Still My Soul, by the boys’ choir Libera: