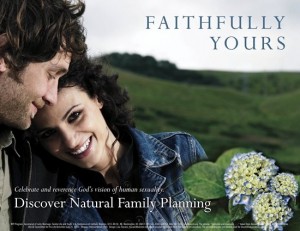 Pope Benedict XVI offered an encouraging message to the recent meeting of the Equipes Notre Dame (translation: Teams of Our Lady), a pro-marriage apostolate. The Holy Father invited all Christian married couples to be “the gentle and smiling face of the Church.” There is no greater way for couples to achieve this than to joyfully open their marriage to the gift of life.

In our secular contraceptive culture, it is assumed that a married couple will, as a matter of course, avoid pregnancy. Only for very narrow windows of time does a couple welcome the conception of a child, if they do at all. Contrast this with the Catholic marriage that makes openness to life the default position. Occasionally, a couple may prayerfully discern that for a limited period of time there exist grave reasons why they should not conceive. Instead of resorting to contraception, however, the faithfully Catholic couple relies on one of the methods of Natural Family Planning (NFP) and abstains from marital relations when conception is likely. As an added benefit, when the couple is ready to resume having children, the same fertility awareness system will identify when sex is most likely to result in pregnancy.

There are multiple systems of Natural Family Planning. The Billings Method and the Creighton Model follow symptoms and changes in a woman’s cervical mucous to identify fertile periods. The Symptothermal method adds the tracking of a woman’s basal body temperature to the cervical mucous observations. They all teach a woman to know her own body and to recognize the signs and symptoms of fertility. Unlike artificial contraceptives, NFP is side-effect free and does not pollute the waterways with active hormone metabolites.

The greatest benefits of NFP, however, do not necessarily lie in its usefulness to achieve or avoid pregnancy, in its safety or even in its ecological benefits. An often forgotten feature of Natural Family Planning is that it strengthens both the spiritual and emotional aspects of marriage. Couples who practice Natural Family Planning have a divorce rate of about 5%, markedly lower than the 50% divorce rate of couples who utilize contraception. Using NFP requires couples to communicate. They have to talk to each other about whether or not reasons exist to postpone pregnancy. They have to talk about whether or not it is a fertile time in the woman’s biological cycle. They do not treat their conjugal relations as mere recreation, but as a time to open their marriage to God’s will. Rather than distort their relationship with contraception, they exercise self-control as necessary for prudent parenthood.

Pope Paul VI expressed this most beautifully in his landmark encyclical Humanae Vitae:

Responsible parenthood, as we use the term here, has one further essential aspect of paramount importance. It concerns the objective moral order which was established by God, and of which a right conscience is the true interpreter. In a word, the exercise of responsible parenthood requires that husband and wife, keeping a right order of priorities, recognize their own duties toward God, themselves, their families and human society.

From this it follows that they are not free to act as they choose in the service of transmitting life, as if it were wholly up to them to decide what is the right course to follow. On the contrary, they are bound to ensure that what they do corresponds to the will of God the Creator. The very nature of marriage and its use makes His will clear, while the constant teaching of the Church spells it out.

There is no question that using NFP can be challenging. But the challenges of NFP are met when couples do as Pope Benedict encouraged the Equipes Notre Dame to do and “constantly drink from the fountains of grace of the sacrament of marriage.”

Our bishops have declared July 22-July 28 as National Family Planning Awareness week. Use this week to strengthen your resolve to have a contraception-free marriage. Take advantage of the many resources available to learn about NFP and share this information. Let’s build a culture where using NFP is normal, not radical. It enables virtue in both men and women. It fortifies marriages. Natural Family Planning lifts children up as generous gifts from God. By humbly acknowledging God’s authority in the creation of new life and trusting in His goodness, NFP lays the foundation for an authentic culture of life.