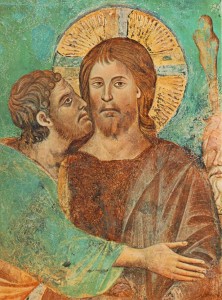 If you’ve ever been betrayed by a best friend or by someone you loved deeply, remember that Jesus was, too. Judas was a part of Jesus’ inner circle. Jesus called him, chose him, spent every day in his company as they traveled together preaching the good news.

At the Last Supper when Jesus instituted the Eucharist, he ordained his apostles as priests. Assuming Judas was there at the moment of that first Eucharist, then he also was ordained a priest mere hours before he betrayed Our Lord unto death.

My heart breaks for Our Lord and the suffering he experienced by this most intimate betrayal. We could theorize about what drove Judas to betray Christ. It could have been greed and the lure of silver. It could have been disappointment that Jesus rejected the role of an earthly or political Messiah. It could have been political ambition and a desire to ally himself with the powers-that-be. But all those reasons seem so petty.

Jesus understood the blackness of the human heart. He told the story of his betrayal in parables before he died. In the parable of the wicked tenants, Jesus tells a tale of how the tenants of a vineyard killed all the stewards rather than give the owner his due. Finally, the owner sent his son to them, thinking “They will respect my son.” But the tenants killed the son to steal his inheritance and brought condemnation upon themselves.

Whatever goal Judas wanted to obtain by betraying Jesus, Judas did not obtain it. Whatever inheritance the tenants wanted to keep did not remain theirs. Betrayal never accomplishes its goal.

Betrayal happens within families as well as between friends, and the Bible tells those stories, too. The Old Testament story of the betrayal of Joseph by his brothers mirrors or prefigures the betrayal of Jesus.

First, Joseph’s brothers conspired to kill him, but lost their nerve and threw him in an empty cistern to die. Finally, rather than letting Joseph die, his brothers decided to sell him to slavers for twenty pieces of silver, saying, “After all, he is our brother, our own flesh.” These saccharine-sweet words of self-congratulation hurt as much as a betrayer’s kiss. Years later, when Joseph’s brothers were suffering from famine, Joseph himself saved them with the riches of Egypt, where he had become steward. The victim became the savior.

If you have been betrayed, know that Our Lord suffers with you. If you have been the betrayer, ask forgiveness, repent, and stretch out your hand for salvation. It’s not too late.