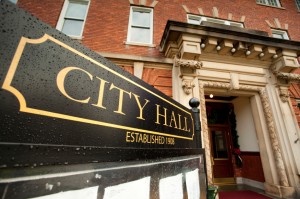 Do you think government today can’t get anything done? Check out James Fallows’s piece in The Atlantic this month. He writes a great article on a pair of Mayors who are doing big things in their cities. It’s exciting: efficient, local, credible political action – actual change you can believe in! Forget placing your hope in some grand federal legislation. Turn instead to the people who are actually getting things done: Your local officials.

Fallows looks at two specific examples: Greenville, South Carolina and Burlington, Vermont. Greenville was home to major textile manufacturing in the mid-20th century, but adapted quickly when it saw no light at the end of that tunnel. In the subsequent decades, government officials and businesspeople pushed to attract up-and-coming industries to town. A strong succession of mayors from the 70s to today have continued to recruit businesses and push through their visions of an integrated, sociable community. In addition to attracting manufacturers, they worked for walkable downtowns, a baseball stadium, hiking trails, parks, and a vibrant mixed-use downtown showcasing popular retail stores, restaurants, and hotels. And Greenville’s conservative population was all for it! The efforts were labeled “public-private partnerships”, for that is both (a) what they were and (b) a term that could be embraced by government-wary conservatives. At the end of the day, Greenville’s people, local government, and businesses all won and the city is thriving.

Burlington, VT is on the other end of the partisan spectrum, claiming a Socialist mayor, Bernie Sanders, bent on using the force of government to improve his city. Interestingly, Burlington also uses the term “public-private partnerships.” And they have made many similar efforts: helping businesses grow, and establishing parks, bike paths, and public spaces.

Burlington leans left in its styling (cleaning products company Seventh Generation, school programs, a snowboarding company) while Greenville leans more to the right (GE, BMW, downtown businesses), but in the substance of their initiatives they have much in common. This is because liberals and conservatives have fewer functional differences in local government than in national government. When you get close enough to the community, people start knowing each others’ names, and the harsh divisions between government and business and family that exist on the national level become a bit blurry and muddled. In both of these cities, the rhetoric of “public/private partnerships” got everyone on board because it represented a reality that almost everyone wants: businesses, citizens, and government working cooperatively to improve their community.

The soil is fertile for a renaissance in local government. Congressional partisans are in the business of getting nothing done lately. The biggest “help the people” program in decades, Obamacare, is opposed by more than half of Americans and has fallen on its face out of the starting gate. Yet Americans don’t seem to know where to turn.

What if conservative leaders began to tell the stories of communities like Greenville and Burlington, promoting a positive vision of the potential latent in a locally-scaled politics? Let people look to their local communities for answers, to local governments where people can work together despite partisan differences, where all parties involved care about their town or county because they all live there, and where work can get done without being tied up for months or years in a federal legislative process or disemboweled by a massive faceless bureaucracy.

How many people actually think the federal government has a better understanding of their local problems than their neighbors and local government? Why not put trust in the people you know? Sadly, Americans have come to look to the Savior Fed for help as it has aggrandized its power over decades. That’s certainly not what our founding fathers envisioned.

James Madison, in Federalist 45, explained how the powers of the federal government were to remain limited while state governments retained robust powers: “The powers delegated by the proposed Constitution to the Federal Government, are few and defined. Those which are to remain in the State Governments are numerous and indefinite…. The powers reserved to the several States will extend to all the objects, which, in the ordinary course of affairs, concern the lives, liberties and properties of the people; and the internal order, improvement, and prosperity of the State.”

Strong local and state governments go hand in hand with the root ideas of our country. Thankfully, we have seen hope recently in strong actions taken by state governments across the U.S. Issues as important as abortion, immigration, and union power are being tackled on the state level. We may be seeing a new, welcome surge in federalism.

Contrary to what some would have you believe, our ever-globalizing world doesn’t demand a Federal Savior to come in and take control. Just look at the kinds of goods coming through the public-private partnerships in Greenville and Burlington: jobs, community involvement, improved standards of living, city growth, business growth, better health! These are not small matters. States and communities are capable of much if we would simply take our eyes off the golden god of the federal government and demand more of ourselves, our neighbors, and our local governments. It’s time for more big little governments.