Trending Now
You are at:Home»Featured»Bishop: Memory of Holocaust Should Inspire Greater Vigilance for Unborn
By Patrick B. Craine on November 29, 2011 Featured, Life Issues & Bioethics 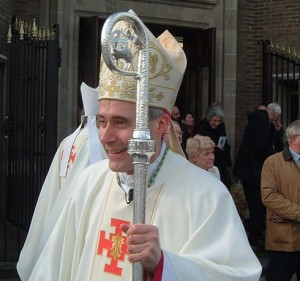 The memory of the Holocaust should inspire Christians to greater vigilance on behalf of the unborn and the vulnerable, remarked a U.K. bishop at an address commemorating Holocaust Memorial Day on Nov. 24th.

Warning that “no Christian can pass by the Holocaust without profound reflection,” Bishop Mark Davies of Shrewsbury observed that mass crimes and genocide “have continued to disfigure history.”

“We cannot forget the return of ‘eugenic’ thinking directed against the unborn and the most vulnerable deemed ‘unfit to live’ or threatened with ‘mercy killing.’ The struggle against evil continues,” he said.

The bishop’s talk earned praise from John Smeaton, the director of the U.K.’s Society for the Protection of Unborn Children, who congratulated the bishop for a “prescient and courageous act of witness to the sanctity of human life.”

Speaking at a synagogue in Manchester, Bishop Davies said Christians cannot fail to recognize that Hitler’s campaign of annihilation was directed against a people chosen by God Himself, who Pope Benedict XVI has called “our fathers” in faith.

“The Nazi reign of terror we recall today was based on a racist myth on an idolatry of race and state but as both Pope John Paul II and Pope Benedict XVI have reminded us it was also a radical rejection of the God of Abraham, Isaac and Jacob who is, ‘the God of Jesus Christ and all who believe in him’,” the bishop said.

For Hitler and the Nazis, “the Almighty” was a “pagan idol,” intended to replace the God of the Bible, he observed.

“The study of the Holocaust must lead … to a deeper appreciation of the close bonds between the Jewish people and Christians recognizing our common roots and the rich spiritual patrimony we share.”

“An ideology which grew at the center of European civilization sought to remove from the face of the earth in this Holocaust the people called by the Lord before all others,” he said.

“This must surely lead us to recognize every continuing assault upon the value and dignity of every human life and person and to recognize in this the denial of the Creator,” he continued.  “This must call us to vigilance in the face of the developing ideologies and mindsets of our time so often hostile to the Judeo-Christian foundations on which our civilization was built.”