Trending Now
You are at:Home»Columnists»Bonding Over Baseball
By Dr. Paul Kengor on October 29, 2013 Columnists, Featured, Sports 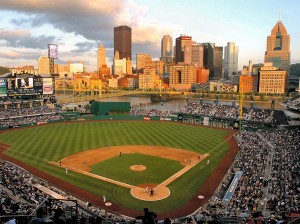 My cousin Drew is a 45-year-old veteran of the first Gulf War (1991), which he served aboard a battleship in the Persian Gulf. A former high school quarterback out of Western Pennsylvania, he has always been carefree and a little wild, and always fun to be around. Today, Drew is confined to a wheelchair. He suffers from what was officially diagnosed as “Gulf War Syndrome.” The condition has manifested itself as advanced MS, which he believes he contracted on the ship after being forced to take an experimental drug designed to counter the impact of a (suspected) chemical-weapons attack by Saddam Hussein.

This isn’t where Drew expected to be in his mid-40s.

Drew and I haven’t been in touch much since we were kids. I’ve always regretted that. I would call him occasionally and we’d engage in whatever small talk we could, usually about politics and the country.

In August, I phoned Drew again, after no contact for a while. His sister told me his condition had worsened. “How are you?” I began. “Well,” he sighed. “I’m still alive.”

After some uneasy words, our conversation picked up and lit up when we suddenly hit upon something we hadn’t discussed in years: baseball. Specifically, the focus was Pittsburgh Pirates baseball. The Pirates were looking at their first winning season in over 20 years. Drew and I talked for probably a half hour just about the Pirates.

But the dialogue didn’t end with that phone call. I soon thereafter learned that Drew loves to send text messages. I don’t, and (up until then) had resisted learning how. But the growing onslaught of Drew text messages forced a reappraisal, especially because the subject was baseball.

Over the course of the next three months, not a Pirates game went by where Drew and I weren’t texting throughout. It was a blast. When I was on vacation and didn’t have the local cable channel that carries the Pirates, Drew handled the play-by-play for me. It was like a live-feed, accompanied by Drew’s usual color and (uncensored) flare.

One afternoon, I was driving my 11-year-old daughter home from swim practice with the game on the radio. My phone repeatedly chimed in with various snippets of analysis by Drew. My daughter intercepted them with a bemused glance. After one particularly awful Pirates’ error, I heard the chime and told her she might not want to read that one. She caught the four-letter word and blushed and giggled the rest of the way home.

When the Pirates finally made the playoffs, for the first time since 1992, Drew texted to inform me that he ventured out and bought a 60-inch big-screen TV for the occasion. I have no idea how he got to the store, got the TV in a car, and got it inside the hotel room where he lives, nor got it hooked up. But not unlike his ability to somehow fly himself to Europe when he gets the urge, or get himself to a Pirates game—a 103-mile one-way cab ride to Pittsburgh—Drew made it happen. He always made things happen.

I texted him about half an hour into the game. “How’s the TV?” I asked. “Awesome,” he replied.

Our communication continued during down time in between games, when we discussed (always via text) the latest on politics, the world, Syria, Russia, Iraq, and the circumstances in the Middle East that had contributed to his condition.

His texts have been much more frequent than mine. I have seven kids and I’m never alone. Drew is alone. He’s confined. But every single message makes me smile. In fact, as I write this sentence, another just came in.

Happily, the texts have continued beyond the Pirates’ exit from the post-season. Throughout the championship series in each league, whether the Cardinals vs. the Dodgers or Red Sox vs. the Tigers, we exchanged texts. I asked Drew for an update on the 60-inch TV, and got it: “I also bought the surround sound system that went with the TV and it is awesome. Watching a ballgame on it is unbelievable.” It’s a “smart TV,” has some sort of “flex belt.” Drew says the TV is smarter than him. And me, too, I’m sure.

My point, of course, is this: what has happened is that Drew and I bonded over baseball, beginning with the resurrection of our beleaguered Pittsburgh Pirates. We’re now in touch more than ever before.

Baseball has long been America’s past-time, bringing friends and family together for over a century. It’s there every day, day in and day out, from April to October. It’s still our past-time. It still brings people together. That’s an intangible that doesn’t appear anywhere in any box score.

[Editor’s note: Another version of this article first appeared in the Pittsburgh Post-Gazette.]