More than two months after publication, Levin’s book, Liberty Amendments, continues on the New York Times bestseller list.*  At the outset the reader encounters an earnest and persuasive appeal on behalf of an Article V “convention for proposing Amendments.” Levin then proceeds to propose an 11 point reform agenda which the Convention might consider.

At first glance, the simplicity and austerity of Levin’s eleven proposals for Restoring the American Republic account for much of their attractiveness.  But as we scrutinize the nation’s convoluted problems, it should be apparent that solutions must proceed with subtlety, and not without some complexity.  Taking an aspirin for acute appendicitis is simple enough, but utterly inadequate.

In chapter two, for example, Levin, begins with an uncomplicated twelve year scheme of term limits for members of Congress.  Such a uniform application clashes, however, with the bicameral structure of Congress.  A dozen years across-the-board hardly takes into account the Framers’ differentiation between a people’s House of Representatives with a two year term, and a more aristocratic Senate with its six year term.

Furthermore a rotational speed of twelve years (average tenure in the black robed oligarchy, SCOTUS, currently stands at 15 years) would do little to democratize the chamber, the House, which is supposed to be closest to the citizenry.  About all that really differentiates the House from the Senate anymore is its size – 435 Congressmen vs. 100 Senators; also the internal system of minority rule imposed in the Senate by the filibuster, but in the House with autocratic chairmen presiding over a score of semi-autonomous standing committees.  These committees and their numerous subcommittees take plenty of advantage from their insider status, such that the views of private citizens are so little regarded that public hearings are primarily for show.

Just as the new broom sweeps clean, so a biennial rotation of the membership will keep sweeping away the deadwood that has come to dominate the House of Representatives.  By contrast, weak term limits applied uniformly to both chambers of Congress would yield a very superficial cleanup.  Let’s do the job thoroughly; let One Term – No Reelection stand as the new bulwark of democracy in the House.

One term rotation of the House would have the simultaneous effect of stamping out the corruption that accompanies the incumbents’ need to keep restocking their reelection campaign war chests.  Incumbents are inclined to solicit and welcome campaign “donations” from an army of corporate lobbyists.  The corporations clamor to contribute so as to maintain their plutocracy.  Sanctioned by SCOTUS in a 2010 case, Citizens United, the plutocrats’ power vastly exceeds the clout exercised by “We the People.” 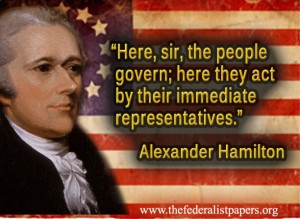 A rapid rotation in office has been exhibited in history as a powerful democratizing institution, but the ponderous twelve year turnover rate would, at best, knock off the most senior homesteaders in D.C., while the general character of Congress would remain remote from the people.

In the Senate, however, any term limits scheme would be unwise in tandem with rapid rotation of the House.  Let the Senate be maintained as a place which honors institutional memory, and where genuine statesmen can win unlimited reelections, while the House provides the populist balance.  Thus can we restore democracy within the framework of a Republic.

For Congressmen, US government experience can be secured via apprenticeships as ombudsmen performing constituent service in the Federal bureaucracy, immediately before service begins in the House.   Also serving in a junior role on congressional joint committees would provide the necessary familiarity with “the ins and outs” at the Federal level.  For details on a 4+ year path of advancement for US Representatives, leading in stages from an ombudsman/joint-committeeman role before advancement to a congressional seat, look here.

Furthermore, Congress cannot be revived as a viable national legislature until a constitutional Amendment restores majority rule in both chambers, unencumbered by parliamentary obstructions that prevent up and down floor votes. [Follow this link for specifics which a Convention should consider].  Political gridlock in Congress has the effect of creating a power vacuum in the Legislative Branch, which gets filled by Federal judges usurping power (legislation from the bench) and by autocratic decrees issuing from the Executive Branch.

Contrast the aforesaid patterns with the second of Levin’s eleven constitutional reforms.  Here he would revert to original principles; but not, unfortunately, by restoring the populist character of the House, or by restoring what Jefferson termed the Lex Majoris Partis.  Instead he would repeal the 17th Amendment.  Levin wants to restore the system (in force until 1913) whereby US Senators got elected by their respective State legislatures.

The advantage in such a plan would be to restore the connection, or political nexus, between Congress and the State legislatures.  But this decentralizing principle could be accomplished in more salutary fashion by giving State legislators the power to initiate recall proceedings against their own Representatives in Congress; meanwhile keeping the election of Senators directly subject to the suffrage of the people.  (For details click here).

Levin addresses also the usurpatory Federal courts (part three of his eleven point Convention agenda).  But his solution could prove worse than the malady, for it might seriously disrupt the separation of powers.  Empowering the Legislative Branch to intervene in Judicial matters on a case-by-case basis is not only impractical – like trying to track down, one by one, all the evils released from Pandora’s Box – but it would further politicize the judicial process.  The answer to usurpation from the bench is not to contrive new ways for the Legislative Branch to usurp Judicial powers, but rather to assign jurisdiction to State courts when Federal courts overreach.

In Article III, section 2 of the Constitution are the germs of such a reform, implicit in the infrequently used authority of Congress to remove jurisdiction over particular categories of cases from the Federal courts altogether.  Under amending recommendations which we must make to a Convention, let us include an explicit extension of congressional authority to transfer jurisdiction over particular types of cases to State courts; in no way, therefore, involving legislators in the adjudication of particular cases.

Empowering the very branch which writes statute law to review the statutes for their constitutionality would create a new set of problems involving conflict of interest.  But suppose Congress could act like a referee, transferring jurisdiction from the Federal to the State courts, and back again, as a way of securing checks and balances between courts at the Federal and state levels, i.e. vertically in both directions.  In other words Congress would be able to invert the current hierarchy of appeals, so that usurping Federal judges get preempted [and humbled]by judges in the States.**  Against  the intoxicating habit of usurpation from the bench so chronic today, there can be no antidote quite so effective as a strong shot of humiliation – just as the NCAA imposes sanctions on corrupt athletic programs, and bans them for a duration of years from postseason play.

Another judicial reform for a Convention to consider should be the power to trim back case precedent which is overgrowing U.S. jurisprudence like an encroaching jungle.  The Congress (reformed as indicated above) should be given the task of selectively pruning back the body of Federal precedent accumulated since, say, the centennial of the Bill of Rights (December 15, 1891) – in contrast to Levin’s scheme of case-by-case congressional intervention which could be antedated no further than 24 months.

Our insufferably bureaucratized society did not suddenly get straight-jacketed in 2011.  The bondage goes back decades, like the trail of blood leading back to Roe v. Wade (1973) when defenders of life, and unborn babies themselves, were nailed to the twisted cross of a “living, breathing” Constitution.  Under the system indicated here, the newly democratized Congress would be empowered to loose our bonds retroactive to when the fetters were fastened.***

In his incisive and compelling Epilogue, Levin denounces “delegation of power to elusive and unaccountable bureaucracies.”  Among his most aggressive proposals is the sixth of his Liberty Amendments; it would attack the impenetrable thicket of bureaucracy that stifles free governance and renders society crushingly top-heavy.

Most encouraging, from my standpoint, is Levin’s militancy against “an obtuse and defeatist notion of moderation….”   Hence the necessity of recourse to the Convention — as distinguished from a dysfunctional national government which is inextricably tied to the status quo and to political self-interest, and which, alas, is largely “unaffected by elections.”  Instead we suffer, as Levin puts it, “a systemic problem that is bigger than any Federal election or administration” and where a corrupt political class seeks to “evade the Constitution, confound the citizen, and suppress self-government.”

* NYT bestseller list, 10/27/2013, hardcover non-fiction, #19 on the list.   Throughout August and most of September Liberty Amendments was #1.
**  A sunset clause of c. four years ought to apply to every such inversion of appeals.
***  As the 22nd Amendment provided a specific exemption for the Administration of incumbent President, Harry Truman; so should Brown v. Board of Education be held constitutionally immune, i.e. excluded from the process of case precedent pruning.

The next installment in this series will examine Levin’s proposals for economic reform, as set forth in the seventh and eighth of his Liberty Amendments.  See also my earlier commentaries:
part 1, part 2, Part 3, Part 5