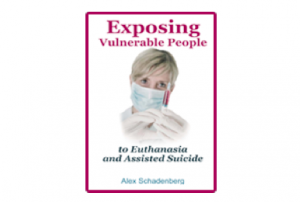 A new book by Alex Schadenberg, executive director of the Euthanasia Prevention Coalition (EPC), challenges the myth that  vulnerable people are not at risk under euthanasia and assisted suicide legislation.

The book also examines the most recent statistics concerning the practice of euthanasia in the Netherlands.

Exposing Vulnerable People exposes how false and misleading reports are being used in other jurisdictions to support the legalization of euthanasia and assisted suicide.

Of special interest to Canadians is an exposé by Schadenberg of how Justice Smith in the Carter assisted suicide case in British Columbia “avoided the truth in order to establish false and dangerous recommendations for the legalization of euthanasia and assisted suicide in Canada.”

“The Quebec Commission on Dying with Dignity has in its 2012 report recommended the introduction of euthanasia, while stating that they had reviewed the literature on the euthanasia experience in Belgium and Holland, and could not find any clear evidence of abuses or of any drift,”  said Dr. André Bourque, past president of Vivre dans la Dignité (Living with Dignity) in Quebec, before his untimely death in January. “Alex Schadenberg sets the record straight on what they should have read or may have purposefully ignored.”

Well-known anti-euthanasia advocate Kevin Fitzpatrick of Not Dead Yet in the UK, who is the newly elected coordinator of the Euthanasia Prevention Coalition–Europe, remarked, “Using already existing studies, Schadenberg has uncovered the shocking truth about euthanasia in Belgium, the lives lost and the deep threat to others. His work demonstrates unequivocally that we must never follow this Belgian pathway to the easy killing of people whose lives are not valued by those who do the killing.”

In the foreword to the Australian edition, Commonwealth Parliament of Australia MP Kevin Andrews said, “If a law is to be valid, it must protect vulnerable people. Regrettably, euthanasia laws fail this basic test.”

“The idea that there are lives unworthy to be lived is dangerous,” he said. “The ‘slippery slope’ is not imaginary. It exists – and despite the efforts of euthanasia sympathizers – it cannot be wished away.”

Maggie Barry, MP in the Parliament of New Zealand, pointed out that “Alex Schadenberg’s comprehensive analysis of studies from countries where euthanasia is legal reveals disturbing evidence of inaccurate and misleading conclusions.

“He uncovers proof,”  Barry said, “that vulnerable people, including the elderly, the depressed and those with disabilities are very adversely affected when assisted suicide is legalised. His findings also raise significant concerns about the manipulation and abuse of the reporting process and the ‘slippery slope’ reality of state sanctioned intentional killing.”

“This book spells out the chilling consequences and I would recommend it as required reading for legislators and commentators who may be contemplating changing our laws,” Barry concluded.

Paul Russell, founder of HOPE, an Australian coalition of groups and individuals who oppose the legalization of euthanasia and assisted suicide, said, “For legislators and commentators alike, this is a must read,” Russell said.