Trending Now
You are at:Home»Columnists»Papal Resignation Rates an A+
By Russell Shaw on February 22, 2013 Columnists, Featured, History, Leadership 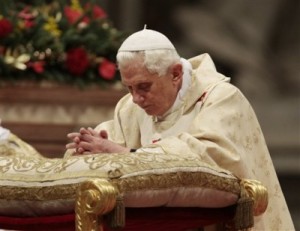 For the last several weeks I’ve been teaching an online course about the role of the Catholic laity. We’d just gotten to the subject of personal vocation when the startling news came through: Benedict XVI was stepping down as pope.

Posting a question that Monday morning to get my students’ discussion rolling for the week, I began by remarking that Benedict’s action was “the most striking example of personal vocation that I’ve seen in a long time.”

My students, bless them, were quick to pick up on that. Calling the papal decision “a wonderful example of personal discernment,” the very first of them to respond said this:

“First, personal vocation is just that, personal. Not every man who is pope will retire as Benedict XVI just did. It is part of God’s plan for this man, at this time, in this case. Second, it is discovered over time, in prayer and many times through the circumstances of life. The Pope says he has been noticing his strength decrease over the past few months and has been praying about this and come to the conclusion that he must retire.”

That rates an A+ in my book. Too bad that can’t be said of all the commentaries on the papal resignation that I’ve seen and heard.

Some people contrasted Benedict’s decision, taken in light of failing strength, with Blessed John Paul II’s decision to soldier on to the end despite the inroads of Parkinson’s disease. Then they cited the difference to the disadvantage of either one man or the other: John Paul should have done as Benedict is doing or, alternatively, Benedict should have died in office, as John Paul chose to do and as popes generally have done.

But this misses the point that, as my student astutely put it, “personal vocation is just that, personal.” Pope Benedict and Pope John Paul faced circumstances that were alike in some ways but also unalike in others. These were two different men who heard God calling them to act in two quite different ways. Note that both before and after becoming pope, John Paul II was the greatest exponent of the idea of personal vocation that we’ve seen yet. Clearly, he applied the idea in his own case, right up to the end.

What will Benedict XVI be remembered for in the long run? The tremendous emphasis he has placed on new evangelization, no doubt,  his courageous stands against things like women’s ordination and same-sex marriage that set him firmly in opposition to two sacred cows of the secular media, feminism and gay rights, his equally courageous defense of Vatican Council II as a council of both continuity and reform, which brought down on his head the wrath of  people seeking to depict Vatican II as a radical break with tradition–all this and much more.

But it is also possible that he’ll be best remembered as the pope who resigned.

That might seem to be a diminishment of the man and his achievements, but it isn’t. Simply as a practical matter, Benedict’s action sets an important modern precedent that could continue to serve the Church and the papacy well in years to come in the face of rising longevity in combination with crises now unforeseen.

Beyond that, though, I hope Benedict’s decision will come to be seen and appreciated for what it so clearly was: the prayerful discernment and acceptance of a new stage in the unfolding of his personal vocation. All of us can learn from that.