Trending Now
You are at:Home»Columnists»Book Review: Dear God, You Can’t Be Serious!
By Jake Frost on February 6, 2014 Columnists, On Books, Parenting 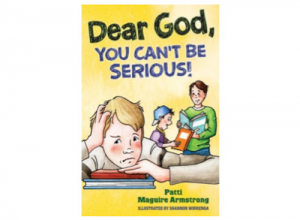 Have you ever found a really good series of kids’ books, something the kids love to hear read aloud and to re-read on their own (or for our kids, to leaf through and look at the pictures again), but wished that there was something more in them than a light adventure story?

I love reading to the kids, and when I find something that will keep them on the couch listening—instead of wandering off, or worse, asking for a movie—it’s a definite score!  But much as I love a successful evening of story time, many a series of children’s books has left me disappointed in their lack of substance.  Too often they’re just empty action—entertaining, but pointless—the cotton candy of the book world:  all fluff and sugar, no nourishment.

That’s where Patti Maguire Armstrong’s new book, Dear God, You Can’t Be Serious! is genius.  It strikes just the right tone and pace of the best in modern children’s book series, with a wonderful blend of action and humor, likeable characters the kids will identify with, and an engaging story to keep them hooked and anxious to find out what will happen next, but it also gives the kids something of value in return for their time and interest invested in the story and characters.

Much of modern children’s media in general seems devoted to removing the heroic from heroes:  characters succeed and receive adulation without ever having to invest much of themselves, face discomfort, or—shudder at the thought—change and grow.  Often the problems take care of themselves through some happy accident or a benevolent outside force that comes to make all things right with no more than minimal effort required of the supposed heroes, who can come off seeming more like rescued victims than champions.  Then there is the whole subgenre committed to advancing the notion that there actually are no conflicts in the world, only misunderstandings.  Those stories are nothing more than a quest to unravel the apparent conflict until the kernel of confusion is discovered and then–poof!—all difficulties vanish, everyone is friends, and it turns out that all that was really needed was a new perspective on things, which invariably reveals that deep down everyone is nice.

Dear God, You Can’t Be Serious! offers a lot more than that.  At the climax, the hero must actually act like hero:  by doing what’s right in the face of adversity—and even learning something and changing to become a better person in the process.  When the moment of decision comes upon him, the character prays:  “God, help me to do the things I need to do—the things you want me to do.”

That’s the kind of book I’ve been looking for to read to my kids.