Trending Now
You are at:Home»Featured»Book Review: In Our Backyard
By Kathleen Woodman on October 5, 2011 Featured, On Books 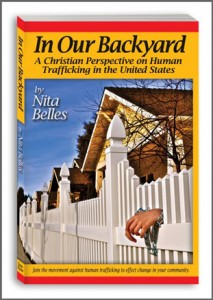 There’s a brutal invasion sweeping across our country, attacking our decency and humanity from the inside out. While we enjoy eating fresh produce, consuming chocolate candy, staying at a clean hotel, or getting our nails done, human trafficking has often been crouching in the background as a ruthless supplier for these goods and services.  Other vast areas using human slavery are prostitution and the production of pornography.

Human Trafficking has been defined by the United State Conference of Catholic Bishops as “the exploitation of a person through the use of force, fraud or coercion for the purpose of forced labor or commercial sexual exploitation.”  Men, women, and children from the U.S. and abroad are being subjected to unbelievable abuse, while their lives are controlled by their traffickers in such a way as to make it extremely difficult for them to escape. According to Shared Hope International, “Experts estimate at least 100,000 American juveniles are victimized through prostitution in America each year.“1

What would happen to your daughter if a sex trafficker gained access to her? You may think this is impossible. It isn’t. In her powerful book, In Our Backyard,2 Nita Belles gives us an inside look into the world of human slavery, which is flourishing right here in the United States. Well documented with numerous sources and statistics, this disturbing, compelling book is a must read to become aware of the pervasive scope of this problem. Human trafficking is not confined overseas, or limited to big cities like Atlanta, but is also found in small communities all over America. If you’re thinking it can’t happen in your beloved little hamlet, you definitely need to read this book.

The first story Nita opens with is alarming because of the type of victim she tells us about. Surely, I was thinking to myself, this 16 yr. old teen named Sarah* isn’t the type who would succumb to a life of prostitution. She comes from a good, middle class home with parents who love her. Sarah’s involved with her church. She has friends, a 4.0 GPA, and a curfew. So far, so good. What brought about her entrapment?

It all began with a pretty, attractively dressed female “classmate” at school named Maggie,* who came across as very friendly, generous, and understanding.  Like a shark sensing blood, she came into Sarah’s life just at a time when Sarah was chafing under her parents’ rules for accountability. Maggie oozed flattery and freely dispensed gifts of new trendy clothes, while telling Sarah her parents were too strict.  Sarah admired the glamorous life she thought her new friend was living. Maggie was actually not a real friend, but a recruiter for a pimp. Skilled in the slimy arts of deceit and manipulation, Maggie befriended Sarah as the first step in a plan to lure Sarah into prostitution. Before too long, Sarah agreed to Maggie’s idea of arranging “dates” for Sarah with a man in his twenties, for which the teen was paid. Instead of confiding in her parents about these activities and gifts, Sarah kept them in the dark.

Maggie then introduced Sarah to Alex,* a “friend” of hers. Alex showered her with gifts and expensive dates, making her feel special, and he became her first love. Knowing that becoming intimate with Alex was wrong, she foolishly kept the relationship a secret from her parents. She overlooked the fact that sometimes her boyfriend treated her abusively. Sarah even believed him when he told her that she was his only love, even though he ran a “dating service” with other girls (prostitutes) working for him. With many tokens and declarations of love, Alex soon declared that he wanted to take Sarah away to Vegas with him. Even though she had only known him a month or two, Sarah jumped at the opportunity to be with her eager suitor.

The tragic truth? Alex didn’t love her at all; he just wanted another prostitute working for him. He took her to another city 12 hours away where she was gang raped by a group of Alex‘s friends. Traumatized, her new life of prostitution began the next morning. Sarah, the girl with parents who loved her, had become a slave.

This story ended with redemption. Her parents eventually found her, and were able to get her help. She also stayed away from her pimp.  A common problem with children and teens  who are trafficked is that they often return to their pimps. Why? It may seem obvious that they would no longer want to be abused, but there are other powerful factors at work. The unique bond between a trafficker and the victim is often called trauma bonding, and this is one of the outcomes that makes trafficking so heinous. Trafficking often deeply damages the will, the seat of your ability to make free choices. I think that’s one reason why Jesus is so severe when he says, “[B]ut whoever causes one of these little ones who believe in me to sin, it would be better for him to have a great millstone fastened round his neck and to be drowned in the depth of the sea (Matthew 18:6 RSV).

Nita includes many other stories of slavery victims in her book. There’s Charito,* a beautiful chef lured away from the Philippines to work in the U.S. for a move up in her career. What she received was physical and emotional abuse working in a restaurant, for a boss who threatened to harm her if she tried to get away. Another unspeakable tale is about an American mother and her daughter, tricked into signing contracts for “modeling” jobs that turned out to be making porn flicks. To keep them from escaping, their captors used beatings and abuse. All of the accounts are moving, and some are horrific and difficult to read. Nita says it’s for mature readers. However, it’s a book I can highly recommend, as it documents the human cost of the merciless degradation of men, women, and children.

Written from a Christian perspective, the book concludes with a strong message of hope. Nita enumerates many ways we can stop this vicious menace. Most people are unaware of the widespread tentacles of this travesty. It’s so ugly we’d rather not see it, but we need to, or it will continue to destroy lives.

* Names with asterisks have been changed.

2In Our Backyard: A Christian Perspective on Human Trafficking in the United States by Nita Belles (Feb 8, 2011) Go to the Nita Belles website for more information on human trafficking and how to purchase her book: http://www.nitabelles.com/