Trending Now
You are at:Home»Columnists»Book Review: In the Custody of Words
By E. L. Core on September 16, 2013 Columnists, Featured, On Books 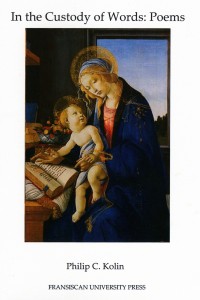 We’ve all been where the waves meet the strand. Perhaps not in person: perhaps watching a movie or TV show. Maybe at the ocean, or on a lake, or by a river like the Monongahela, which I can see from my house. The sights and sounds are familiar: a crash and swish, in the swell of the sea; or, in the wake of a boat, more like a plop and swish. Again and again and again.

Again and again and again, in his new book, In the Custody of Words: Poems (Steubenville: Franciscan University Press, 2013), Kolin displays careful attention to specific details — one mark of the superb writer — and uses them in flights of fancy that cannot help but remind one of Christian mysticism through the centuries:

Like sojourners caravaning
Across the Sinai, the minnows
Watch the sand below them
Shift from rippled desert rows
Into exploding mountain
Tops in ecstasy.
(“Minnows”, p. 27)

Thus I am reminded of Plunkett’s famous poem:

I see his face in every flower;
The thunder and the singing of the birds
Are but his voice—and carven by his power
Rocks are his written words.
(“I See His Blood Upon the Rose”)

And I am reminded of Father Tabb’s observation:

The aster puts its purple on
When flowers begin to fall
To suit the solemn antiphon
Of Autumn’s ritual.
(“A Rubric”)

One wonders, at first, who was “The Prayer Lady” and who was “The Secretary” (pp. 24f). Yet, upon reflection, Kolin’s loving delineation of their anonymous lives — told briefly with characteristic portrayal of telling details — makes us realize we have all known a Prayer Lady or a Secretary. But Kolin also gets us better acquainted with the famous, such as the Patron of the Universal Church (“St. Joseph’s Transitus”, p. 11) and the Fatima visionary Bl. Francisco Marto (“The Shepherd Boy from the Cova”, pp. 22f).

Kolin’s poems remind us that the Word and the world — despite our terrors and our sorrows, or perhaps because of them — are the bearers of mystical wonders. In the Custody of Words comprises twenty poems, and leaves one wishing there were more.

Philip C. Kolin is the University Distinguished Professor in the College of Arts and Letters at the University of Southern Mississippi. Kolin has published several books of poetry, including Reading God’s Handwriting: Poems (Kaufmann, 2012); Deep Wonder: Poems (Grey Owl Press, 2000); Wailing Walls: Poems (Wind & Water Press, 2006); and A Parable of Women: Poems (Yazoo River Press, 2009). In addition, he has published more than 200 poems in such journals and magazines as America, Saint Anthony Messenger, Christianity and Literature, St. Austin Review, The Cresset, Christian Century, Michigan Quarterly Review, Spiritus, Theology Today, and the Penwood Review which awarded him The Editor’s Choice for his poem “Praying the Icons”. Kolin has also published more than 40 scholarly books on Shakespeare, Tennessee Williams, Edward Albee, Adrienne Kennedy, and Suzan-Lori Parks, and others, plus a textbook, Successful Writing at Work, now in its 10th edition with Cengage/Wadsworth. He is the editor of the Southern Quarterly and the publisher/editor of Vineyards: A Journal of Christian Poetry. Kolin is a member of St. Thomas Aquinas Parish in Hattiesburg, Mississippi.