Trending Now
You are at:Home»Featured»Patterns and Incidents
By Daniel Greenfield on September 16, 2013 Featured, Government & Politics, Law & Justice, The Social Order 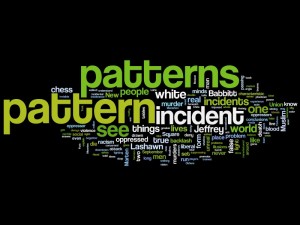 Last Wednesday [that is, Sept. 4, 2013], Lashawn Marten was playing chess when he announced, “I hate white people”. Then he began hitting random white people who were walking by. By the time he was done, several were wounded and one lay dying.

I have walked by countless times and seen the chess players sitting near the overhang of the Union Square subway entrance; mostly black men daring white passersby into a money game. At the fountain to the left, Moonies squat on a blanket and sing their sonorous chants. To the right, the remnants of Occupy Wall Street set up tables to collect money and dispense buttons.

In warmer weather, break dancers perform on the stairs, and office workers sit beneath the statue of George Washington expelling the British and eat lunch. NYU students mingle with Whole Foods shoppers. Elderly Puerto Rican men push makeshift wooden carts piled with unlabeled bottles of homebrewed soda pop, and dog owners head for the run underneath the towering edifice of the Barnes and Noble superstore.

On Wednesdays, the farmers’ market shows up and, if not for Rosh Hashana, I might have been passing by the chess tables, maneuvering between the Moonies, the protestors and the chess players. Jeffrey Babbitt, the man Lashawn beat to death, looks familiar to me if only because he has that kind of New York face that you pass on the street. You see it worn by plumbers and high school teachers. It’s the badge of the vanishing New York City working class.

No conclusions will be drawn from the murder. Lashawn Marten was obviously mentally ill. And if his mental illness took the form of violent racism toward white people, that is an incidental fact. The murder is an incident. The details are incidental. Even if Lashawn is actually prosecuted on hate crimes charges, no conclusions will be drawn from what happened between the chess tables.

Incidents take place all around us, but patterns have to be articulated. The incident is insignificant. It’s the pattern that counts.

Our minds are not trained to hold incidents. They are trained to grasp patterns. The patterns and incidents float all around us like bits of data. They are formed out of the firsthand experience of our memories and the secondhand experiences of the news items that we pick up. They are the chess game that goes on in our minds between our subconscious processing the events of the day and the outside forces seeking to shape our minds. The pieces that they move around are our thoughts.

The patterns that we absorb from reality we call common sense, but the patterns imposed on us are propaganda.

A man can live in a building where a dozen murders have taken place and still believe that he is in a low-risk area as long as he is told that there is no pattern to these murders. That each single incident does not form any greater whole. And a man can be compelled to believe that he is living in the deadliest place on earth by convincing him that two local murders in one year form a pattern.

The Boston Marathon bombing was an incident. So was the Fort Hood Massacre. So was 9/11. No conclusions can be drawn from them and no pattern can be used to tie them together. They are to be processed separately and discarded. Lone bits. Ragged ends of experience with no further meaning than the private pain of their victims.

One incident is an isolated dot. A stop on a train that goes nowhere. Connect enough of them together and you form a route and a map. And now you’re going someplace.

The media is not that concerned with suppressing incidents. It is concerned with suppressing pattern awareness. No one can deny that the occasional racial murder takes place and that the perpetrators look like Obama’s sons. And no one can deny that Muslims sometimes set off bombs or fly planes into buildings. They deny only that these incidents form a pattern.

Real patterns are replaced with false patterns. Every Muslim terrorist attack is met with media chatter about an Islamophobic backlash. The backlash never materializes, but it doesn’t need to. The mere repetition of it does the trick and sets the pattern. It tells readers that the attack is the incident, but the backlash is the pattern.

White racism is a pattern. Black racism is an incident. Racism is characteristic of white people, but not of black people. The crowds passing through Union Square are subdivided into the oppressors and the oppressed. Their lives are color coded for morality and justice. Jeffrey Babbitt, who dreamed of being a motorman, loved comics and took care of his elderly mother, was an oppressor. His death is an incident that in no way detracts from the pervasive pattern of white racism.

Jeffrey Babbitt was an oppressor and Lashawn Marten was one of the oppressed. Why else announce that he hates white people? This social dynamic was imposed on them at birth and cannot be altered by any act of violence. The acts of violence only affirm the pattern as the oppressed lash out blindly against their oppressors. The occasional death of an oppressor in no way alters the fixed pattern that it is the oppressors who kill the oppressed. It is an incident. Nothing more.

The deaths of a million white men in their sixties who love comic books and dream of driving trains will be no more than an incident. Their lost lives will never congeal into a pattern, their blood will never outweigh that of an Emmett Till. The pattern is set in stone and embedded through endless indoctrination. It is immune to human realities. The passing of a Chris Lane or Jeffrey Babbit moves it not at all. No more than the Zebra murders did.

The pattern of American intolerance is likewise unmoved by September 11 or by two Chechens who set off a bomb near an 8-year-old. The blood and ashes of 3,000 dead is nothing but a stain on the liberal pattern. The blood and ashes of three million would make just as little impression. More people die of cancer or in car accidents, the liberal can always answer. Numbers alone do not make a pattern. And if the pattern is not recognized, then it does not exist.

We live in this world of unreal patterns and real lives where inexplicable things happen all the time.

Overhead, I see two beams of pale light piercing the sky and reflecting at an angle. The towers of light remind us of an incident. Not a pattern. After over a decade of war, no one in authority will admit what we are fighting or why. All that ash and rubble, the twisted steel and the falling bodies, are not part of a pattern. But when a Muslim cabbie is stabbed by a sloppy drunk, that is a pattern.

Most of us see the real patterns, even if only hazily, like the beams of light cutting across the sky. And we see that the unreal patterns, the obsessions with Muslim backlashes and the martyrdom of Trayvon Martin, are unreal things. Not true patterns, but false patterns that reflect at an angle from the true light.

We do not speak of these true patterns. But we know them. They stir in us when the right moment appears. They keep us alive.

Millions walk through life with this double vision, the lenses of their minds blurring the real and the unreal, paying lip service to the grave threat that someone will spray paint a mosque while nervously studying the Muslim sitting in front of them on the trip out of Logan Airport or voting for Obama but moving out to the suburbs.

We deal with problems as incidents or patterns. An incident is resolved once, but a problem requires a more enduring answer.

Patterns are power. The pattern-makers and pattern-dealers derive theirs from being able to dictate the problem and the solution. They are determined to educate us, to explain us to ourselves, to understand things for us, and explain them to us so that we will see the same patterns that they do. They know all too well that if we stop seeing their patterns, their cause and their power will die.

For now it is men like  Jeffrey Babbitt or the spectators in the Boston Marathon and the soldiers at Fort Hood who die. They die caught in an invisible pattern that they cannot see. The pattern is no great mystery. It can be seen by anyone with their eyes open. It does not need to be manufactured or spun. It is simply common sense.

Meanwhile their governments attend to false patterns, chase moderates, and promote democracy in the Middle East. In the Ivy League or any European NGO these patterns seem very real. But the patterns are manufactured to promote ideas about who should run things. The patterns themselves do not run things. They cannot change reality, only our perceptions of it.

The gathered pattern, like the lives of men, tells a story. The story has many themes and characters, but it is always mainly about two things; who should run things and what should be done about it.

We live in a world of phony patterns, of global environmental apocalypses made to order, of shadows and illusions, of phantom fears, panics and doubts. But beneath the illusions of ideas that clothe the false world is a world of real patterns and real observations. This world is the one where problems can be solved as long as we learn to see the pattern.

But even in the liberal world of ghosts and shadows, where rogue air conditioners and cow flatulence are a greater threat to the planet than the nuclear bomb, where Lashawn Marten was oppressed by the unconscious white privilege of Jeffrey Babbitt who died for what he did not even know he had, where every social problem can be solved by destroying the patterns of the past and replacing them with the terrible blank slate of the future, where Muslim terrorism is a phantom fear of bigots, these true patterns intrude.

Terrible acts of violence momentarily tear apart the world of illusion with blood and fire and reveal the terrible truth lurking inside the lies.

On September 11, thousands of New Yorkers standing at Union Square looked downtown to see a plume of smoke rising over Broadway. I was one of them. Some fell to making anti-war posters on the spot. Others enlisted in a long war. On another distant September, some New Yorkers came to the defense of a 62-year-old man being beaten to death for the color of his skin. Others walked on to the farmers’ market, bought their organic peaches while the liberal memes in their heads told them to see no evil.

Our lives are sharpest and clearest when we see the pattern. In moments of revelation, the comforting illusions are torn away and the true pattern of our world stands revealed, waiting for us to act.