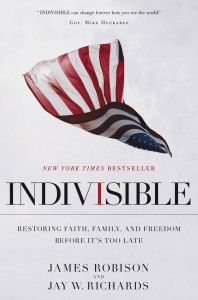 In these final few days of election season, wouldn’t it be a relief to read something informative, constructive, and positive? The political scene this year is filled with negativity and misinformation; yet, we are presented with two very clear choices, at least when it comes to the presidential race. The book Indivisible provides a positive framework within which to examine the questions that swirl around political parties and candidates. It weaves together an account of both Catholic and Evangelical Protestant faith traditions in a practical application of our common principles to political and cultural involvement.

If you look around at our society today, it should be fairly easy to recognize that we are in crisis. We see the family crumbling and people’s faith weakening, and our basic freedoms are under attack in this country as government takes more control over our lives. For me some questions arise from the current situation: Can we hope to reverse these discouraging trends? How can we begin to solve the myriad of problems facing our nation today? How can I better articulate my political beliefs to those who disagree with me? In their book Indivisible, James Robison and Jay W. Richards examine our societal crisis. But they don’t stop there! They also go beyond an examination of the problem and not only say what is wrong—they also offer practical, concrete suggestions for influencing culture that each one of us can implement in our daily lives.

The authors tackle questions in the fiscal and social realm, usually with nuance, and with a thoroughness I find refreshing. They do not shy away from difficult topics such as the nature of marriage, religious freedom, the national debt, or entitlements; rather, they include these topics and more by explaining the circumstance or problem and then proposing tangible ways to approach these situations properly. Robison and Richards cover (get ready!): religious liberty and the role of God and faith in the public square (Did you know that “separation between church and state” is actually a phrase from a letter Thomas Jefferson wrote in 1802, and not in the Constitution or the Bill of Rights?); Just War, pacifism, and national defense; government subsidies, budget issues, and debt; abortion and stem cell research; ‘same-sex marriage’ vs. traditional marriage, and the government’s role in defining marriage; educational choice; poverty and the welfare system; the role of government aid vs. charitable giving; private property and the creation of wealth; free markets; free trade and globalization; immigration; climate change/global warming; energy and resources; and more.

In the introductory section of the book, titled “First Things,” Indivisible’s authors examine the relationship between government and individual freedom. They advocate for a limited government, but one that protects the truth through proper laws. Good laws actually give us greater freedom, so that we can be freer to follow natural law and God’s law and therefore to respect the God-given rights of each human person. The proper view of freedom, which is articulated so well by John Paul II throughout his writings and supported here in Indivisible, is that freedom does not mean the ability to do whatever I want to do. Freedom, properly understood, means the ability to do what is right. This is a freedom “for,” a freedom to do what one ought to do, rather than the typical cultural definition of freedom “from” authority. Robison and Richards argue that government must support this proper understanding of freedom through laws grounded in truth.

This book goes deeper than the level of laws and policies, to look at our individual and widely held beliefs that form a basis for law and policy today. As Robison and Richards say, “Policies are important, but they stem from something more basic: principles.” They present a compelling account of the importance of political involvement today. However, they promote an involvement that is tempered by the realization that politics is not everything, because our salvation does not lie in politics. They propose that we motivate ourselves and be involved with all aspects of society, from a Church community to the political realm. Robison and Richards suggest ways to change hearts and affect the sphere of influence each of us has, and from there, how to affect society. This is partly through politics, but even more it is in the way each of us lives our life and influences the culture through that manner of living. The authors challenge the reader to remember, “Whether you are in a position to influence millions,…or just two people, you can make a difference.”

It can be difficult these days to find practical applications of faith-based principles to the political and social realm. This book is heavily Biblically based, which will appeal to Evangelical readers, but at the same time grounded in Catholic teaching. Indivisible is unique because it seeks to unite conservative Christian values with practical suggestions regarding the political realm, and the wider culture.

Although when I began to read Indivisible I thought it set out to do too much, by the end of the book I was convinced that every person who cares about the direction of our country, especially the preservation of our freedom and the survival of the family, should read this book. At times I found myself plowing through a section of the book, thinking, “I know this already,” but at other times I encountered fresh, new information, or something to add to my knowledge and bolster my confidence in being able to present a logical, complete argument about a particular issue to someone who differs from my perspective or agrees with me but lacks education about the issue.

One indicator that a book really captivated me is that I want to “follow the footnotes.” As I read Indivisible, I found myself marking several endnotes from each chapter, intending to read more on a variety of topics presented by the authors. That is not to say that one would have to follow the footnotes to get a good grasp of what this book presents. Indivisible offers a lucid account of the state of our country today and practical approaches to change the direction of our culture and positively influence our society. Perhaps one of the most compelling suggestions in this book is that Christians need to excel in all walks of life: politics, business, law, education…the list goes on.

Robison and Richards argue that we have a duty to be informed citizens and to work together for the good of our nation. They argue soundly that government is taking over as an ever more powerful state, which we can see in issues such as the HHS mandate and other government intervention in medical and health care; then they argue that we must inform ourselves as citizens, and work together to solve the moral and economic crisis in our country today by learning ideas and articulating arguments clearly to demonstrate our principles regarding social and economic issues. Most of all, however, we must be converted and grow in holiness, to let the Holy Spirit transform each of us individually.

With the help of these two authors, we can strive to help put our country back on the right path and return to the original vision of our Founding Fathers. I recommend Indivisible as a clear, informative, and positive piece that every American citizen would do well to read.