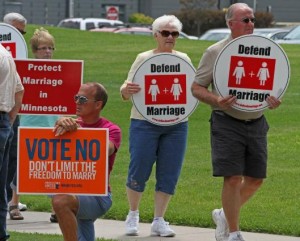 Editors note: This was given as a homily on Sunday, October 14th, 2012 at St. John the Baptist Catholic Church in New Brighton, MN. The gospel was for the 28th Sunday in Ordinary Time, Year B, Mark 10:17-30.

Recently I spoke with a senior at a Catholic high school and he was telling me that there are only three kids in his school who are willing to speak up publicly in support of the Marriage Protection Amendment that is on the ballot here in Minnesota this fall. He also said that there were some girls in the school who were starting to hand out rainbow pins and encouraging all the students to wear them.  And if that wasn’t enough, just a couple days ago another boy in the school was talking with the young man I mentioned earlier, and asked him how he was going to vote on the amendment in November. He replied that he was going to vote “Yes” of course, to which the other boy looked at him shocked and said, “You are?!”

While this situation sounds pretty stark, I think the reality is that most people feel, in their gut, that marriage should be between one man and one woman, but they don’t know how to defend it and they don’t want to stick their neck out and get it cut off by someone who knows how to argue well against it, so they simply keep silent. We tend to not speak out for fear of saying something silly, or we fear we might not know what we are talking about, so we resort to silence. None of us wants to be called a bigot, or hater, or discriminating, so while we support traditional marriage, we don’t always speak up about it.

The first argument we always hear is “Why do you want to limit people’s right to get married?” In a country that boasts of freedom we don’t want to limit anyone anything, and we are seen as evil if we do. The problem with this question or argument, which is not really an argument at all, but an appeal to our emotions, is that it is a misunderstanding of what marriage itself is. Marriage does not equal being intimate with someone; many people are already intimate with someone they are not married to. And marriage does not simply equal two consenting adults, because in addition to the current restriction in this state, of marriage being between only one man and one woman, there are also the restrictions that you can’t marry a member of your immediate family and you can’t even marry your first cousin. Also, you can’t marry more than one person. None of these restrictions were simply made up by legislators in our country. Rather, these restrictions have been present in almost every culture in human history. Why? Because these laws are built into the natural order as God created it. Thus, when we say that you can’t have more than one spouse, we say this because God designed us and he designed marriage to only be between two people. And when we say that only a man and a woman can be married, it is because this is the way God designed men and women and marriage.

In other words, the first question in this debate shouldn’t be “What should people freely be able to do?” because people can freely choose to do anything, but that doesn’t make their choice right. The questions we must ask ourselves are, “How did God create us?” and “How did God create marriage?”

As a man and a woman come together in the Holy Sacrament of Marriage, blessed by the Catholic Church, the spouses must accept three conditions that they state publicly during the ceremony. These three conditions express perfectly what the Church teaches about marriage. But what is key to these conditions is that they are not simply rules imposed by the Church. They are rules that God designed into the nature of man and woman when they are united in the union of marriage. It is not a case of this is what the Church teaches, therefore it must be right; but it is because God created marriage, that this is what the Catholic Church teaches. So let’s examine these three promises to see what they teach us about what God has revealed marriage to be, and what the Church has always upheld.

The first promise is that of permanence. The spouses promise, before the community, that their love for one another will be permanent. They say to one another in their vows, “I will love and honor you all the days of my life.” The commitment of marriage is a lifelong commitment.

Social sciences clearly bear out that any other sort of relationship, including unnatural ones that are seeking to be called “marriage” do not generally have the capacity to last. Unfortunately, in America today, 50 percent of marriages end in divorce within 20 years. What a tragedy! What happened to the permanence that these couples pledged to one another? What is even more startling, however, is that only 5 percent of same-sex relationships last for 20 years or more. That means that 19 out of 20 same-sex relationships last less than 20 years, and yet our culture seeks to call these unions marriage.*

The second marriage promise is faithfulness. The spouses promise to each other that they will remain faithful to each other for life. They say in their vows, “I promise to be true to you in good times and in bad, in sickness and in health.”

The third promise that Catholic spouses make to one another is that of openness to life. They are asked, “Will you accept children lovingly from God, and bring them up according to the law of Christ and his Church?”

And again, social sciences tell us that children who grow up in low conflict homes with their biological mother and father enjoy the best prospects for happiness and flourishing in life. Only male and female can give themselves to each other in such a way that God can bless that mutual gift and bring forth new life. This great blessing is not possible in homosexual relationships.

Bearing all these things in mind, we are now, as a Church and in our place and time, at a decision point. Our beloved Blessed Pope John Paul II said the future of humanity passes by way of the family. And the sacrament of marriage is at the heart of the family. The family is the heartbeat of our society. Do we have the courage to defend it?

In a very interesting way, the encounter in the gospel reading in Mark 10:17-30, Jesus’ discussion with the rich young man teaches us something essential in the current debate about the meaning of marriage. Notice we have two men – Jesus and the rich young man. It says that Jesus looks at him, and loves him. And Jesus invites that young man into a personal relationship of love. Can two men love each other? Yes!!! Of course they can! In a deep, committed way? Again yes! That’s what Jesus was inviting this young man to – a deep, personal, committed relationship of love. Was it marriage? Certainly not! In other words, the ability to freely love someone does not therefore mean that it leads to marriage.

We hear so often the argument that we should not restrict the freedom of people to love each other. Of course we shouldn’t! But is marriage the only relationship where two people can love each other? The gospel of Mark is a striking example that it is not. Certainly, marriage is about love, but it is much more than that. It is also about permanence, faithfulness, and fruitfulness—the bearing of children. The Church never discourages or restricts the freedom to love another person. In fact, the Church encourages this! But the Church stands firm about God’s design for marriage. In the beginning God created them male and female, he created their union to be permanent, faithful, and fruitful.