Trending Now
You are at:Home»Featured»Book Review: The Mass: The Glory, the Mystery, the Tradition
By Luke Arredondo on August 22, 2012 Featured, On Books, Uncategorized 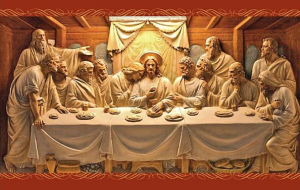 The Mass: The Glory, the Mystery, the Tradition by Cardinal Wuerl, the Archbishop of Washington D.C. and Mike Aquilina is a well-written and concise book about the Holy Mass. Though it was written to coincide with the implementation of the new translation of the Roman Missal last year, I think it can also be a great tool for the upcoming Year of Faith.

Because the authors share a love for the Mass, but from different perspectives – one a clergyman, the other  a layman – the reader gets treated to a panoramic view of the liturgy. The book’s chapters are short and all liturgical and theological terms are clearly explained. There are abundant photographs to show the details of the sacred vessels, vestments, and even the gestures of the Mass.

A feature I really enjoyed was the frequent references to Scripture, particularly St. Paul’s treatment of the Last Supper, and the pervasive theme of the Mass as the new Passover meal. The quotations from the Fathers of the Church were no doubt a part of the work that Mike Aquilina did on the text. While the book is appropriate for the average layman, even those with theological training will find it an aid to reflect upon and deepen an understanding of the source and summit of the Christian life.

The book has a reminder about going to confession before receiving Communion, as well as a discussion about what constitutes mortal sin and the USCCB’s guidelines for receiving Holy Communion. All of this is detailed in the chapter entitled “Preparing for Mass.” It was excellent to see that, and it served as a good reminder to regularly examination the conscience and to receive the Sacrament of Penance.

Another section I really liked was the discussion on page 59 about the Sunday obligation to attend Mass. The authors quote a group of Christians from North Africa in the year 304, who were arrested after gathering for Mass:

“At their trial, the judge asked them why they had exposed themselves to such danger.  They replied: “We cannot live without Sunday Mass!”  True heroes, they preferred the Mass to safety and security. We should at least prefer it to our pastimes and pleasures.

I’ve read Sacrosanctum Concilium and lots of theology about the Mass, but what I really enjoyed in this book was the way the authors walk through the fundamentals of the liturgy and include a lot of interesting facts about liturgical vessels and vestments. For instance, did you know that the alb a priest wears is called that because of the Latin word meaning white (alba)? Or how about the fact that the chausible is believed to have been based on the traditional garb of shepherds, thus highlighting Jesus’ role as the Good Shepherd and the priest’s role as an alter Christus?

All these and many more topics are answered with clarity and brevity in this great book, and at 207 pages, including lots of pictures, it’s a quick read. You could even take it to the chapel for adoration to meditate on different aspects of the Mass. This would make a great gift for an RCIA candidate or a Confirmation student.

Perfect for the Year of Faith

By faith, the disciples formed the first community, gathered around the teaching of the Apostles, in prayer, in celebration of the Eucharist, holding their possessions in common so as to meet the needs of the brethren.  (#13).

This book can bolster the faith of a modern world deeply in need of a new evangelization, and help us to return to the kind of faith Pope Benedict describes. It does so in a very particular way by helping us enter more deeply and “with awareness” in into the Holy Eucharist, the very “source and summit of the Christian life.” (CCC #1324).

More Info:
For more details about the book, check the publisher’s website.
Also, you can get a sneak preview of Chapter One, courtesy of the publisher.