Trending Now
You are at:Home»Columnists»California Law Would Not be in Kids’ “Best Interests”
By Marybeth Hicks on July 5, 2012 Columnists, Featured, Parenting 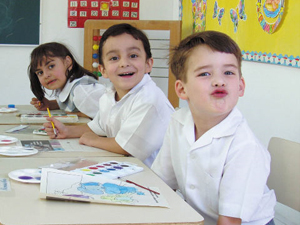 When she was a precocious preschooler, the daughter of my cousin was famous for begging to sit in the front seat of the family car. As the youngest of four children, she was unlikely to have that privilege, even if she was large enough to safely sit up front. She begged anyway.

The story goes that after repeatedly being denied the chance to sit in the front, the little girl buckled herself into her booster seat in the back, smugly declaring, “This is the front seat.”

Which proves that even a 4-year-old can execute the “When all else fails, redefine the issue” strategy.

This is the avenue being pursued by California state Sen. Mark Leno, who has introduced legislation in the Golden State to allow a child to have more than two parents.

Reflecting the changing nature of families, Mr. Leno believes that adults in nontraditional families — such as when there is a gay couple as well as a biological father or mother — ought to have parental rights conferred on all the parties engaged in the business of “parenting.”

Referring to the 1950s TV show about the quintessential American family, the San Francisco Democrat is quoted as saying, “The bill brings California into the 21st century, recognizing that there are more than Ozzie and Harriet families today.”

Mr. Leno is an outspoken proponent of gay marriage, which the voters of California have resoundingly and repeatedly rejected. Now it appears he’s going around the will of the citizens to confer at least one of the “rights” associated with gay marriage — the “right” to be designated as a parent to a child with whom one has no biological connection.

In a tasteless nod to pragmatism, Mr. Leno thinks this bill is a good idea for, among other reasons, its ability to assign financial responsibility for children to an even larger pool of people than just the two responsible adults known as a “mother” and “father.” He envisions kids having access to more child support, Social Security benefits and health insurance.

Apparently what he does not envision are the gruesome and protracted custody battles and fights over who must (or mustn’t) pay child support, fund a college education, foot the bill for a wedding, or even pay attention when said (confused and understandably screwed up) child lands in jail or rehab or on a therapist’s couch.

Most troubling, Mr. Leno seeks to redefine “parenthood” in a fundamentally different way, eliminating old-fashioned designations of “mother” and “father” in favor of the gender-neutral term “parent,” something he presumes anyone can be to another person with whom they form a special emotional bond.

The irony in this bill is that Mr. Leno believes it somehow serves children’s “best interests,” something he wants California courts to determine.

But Mr. Leno ignores the irrefutable proof: If we want to serve the best interests of children, we’d work harder to raise them in intact two-parent families consisting of one mother and one father.

At the risk of stating an obvious, if unpopular, fact: Children of “traditional” families do better by every measurable standard. They achieve more educationally, they engage in fewer risky behaviors, they get more sleep, eat more vegetables, read more books, enjoy better health, and have greater potential for success as adults than do children raised in any other family structure.

Apologies to those who simply aren’t able to provide the benefits of a two-parent home, for whatever reasons. Life throws curves and we all do the best we can with what God sends our way.

But redefining what it is to be a “parent” will no more make someone a mother or father than will sitting straight and tall in your booster seat put you up front where you’d prefer to be sitting.

Words have meaning, and no matter how they redefine it in California, “mom” and “dad” mean something unique and irreplaceable.