Trending Now
You are at:Home»Featured»Called to the Upper Room
By Mary Anne Moresco on June 2, 2011 Featured, Live in Christ 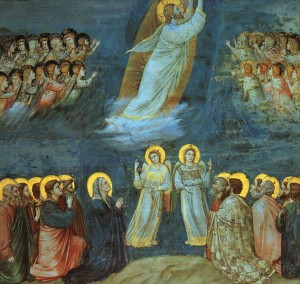 After Jesus ascended to heaven at Mount Olivet, the Apostles returned to the Upper Room in Jerusalem and devoted themselves to prayer (Acts 1:12-14). A novena is nine days of prayer. The nine days of prayer between Ascension Thursday and Pentecost Sunday marked the first of all novenas.

At different times in our lives, God calls us from the rhythm of everyday living that we may be set apart to draw near to Him in our own “Upper Room” of prayer. It was the spring of 1999 when our family had just such a call to the Upper Room.

Our then 6-year-old daughter lay limp in intensive care with so many tubes and wires going in and around her that they were getting tangled. Machines were beeping, and digital displays of all sorts kept close tabs on her condition. I learned to find comfort in the beeping. Every beep brought another assurance of life. Our daughter was an active and inquisitive child, but one would not have known that then. Her body was as unresponsive as a rag doll. In complete kidney failure, dialysis and blood transfusions sustained her. I hesitated to leave the hospital, unsure her life would last until my return.

Problems began on, of all days, Ascension Thursday. Maria had been out of sorts for days. She had been complaining of intermittent abdominal pain and intestinal difficulty which came and went. She had refused both food and drinks that morning. She did not appear sick enough to stay home from school, but something was not right, and an odd feeling of discomfort hung in the air. I attended Mass at her Catholic school and watched her intently as Maria filed into church and sat with her first-grade class. Outwardly she looked fine and dandy. But there was a profound uneasiness in the depths of my being. Telling myself that it was just a precaution, I decided at Mass to take her to the doctor after school.

Catching her hand at the end of the school day, I ushered her to the doctor. Upon examination, he concluded Maria was fine. “Let me know if she worsens,” the doctor added. I was not pleased. Sensing my frustration he inquired, “Is she eating?” I replied that she was eating and drinking so little, I didn’t know how she was standing. But there she was, not just standing, but looking as cute and vibrant as ever. Nevertheless, my uneasiness persisted like a bad cold that won’t go away.

Day One in the Upper Room:

After Maria was sent home from school the next day because she was unable to keep down fluids, I again called the doctor’s office. It is a “group” practice. I spoke to a different doctor. “Does she have a fever?” the doctor asked. “No fever” I responded. After being instructed to check for signs of dehydration, I saw none. Most notably, I was assured her skin would be dry and wrinkled. Maria’s skin was as pink and supple as ever. I spent the night on the floor in her room, half awake and half asleep. “Don’t leave me, Mommy,” she said, over and over again.

Day Two in the Upper Room:

The following morning, Maria lay limp. Carrying her into the office of yet a third doctor in the practice, I again explained the story. “Her skin looks fine,” he commented. He was cool as a cucumber until read the results of a test he had ordered. “She is at stage 10 full-blown dehydration,” he said, sending Maria and me off in a panic to the hospital. I called my husband Tom and asked him to meet us there.

We were in pediatrics. Tom arrived with our then 4-year-old daughter Catherine. At last hooked up to an IV, Maria’s appearance brightened. Life came to her eyes. Could the worst be over? No longer limp, she kicked back with a smile to watch some television in her own private room. “This isn’t so bad,” she concluded.

But it was bad. Despite the IV, there was no sign of kidney function. As hours ticked by the vomiting returned, and grew more frequent. Tom and I stayed by Maria’s side through the night. Tests were run. The Sacrament of the Anointing of the sick was given. The nurses keep muttering something about the “shape” of Maria’s red blood cells. I asked what that meant and they said they were not sure. It was a Saturday night and there seemed to be no doctor available. The intern on duty kept pumping more and more fluids into Maria. This solved nothing. We repeatedly asked for the doctor, but he was always absent. As the night broke with dawn, Maria was spitting up blood. An eerie early Sunday morning call came from the pediatrician explaining the need to transfer Maria to intensive care. She was lifted from the bed to a stretcher with all her belongings and wheeled into a premier pediatric intensive care unit.

Day Three in the Upper Room:

Tests were run. Doctors were summoned. Diagnoses were made. Maria was afflicted with deadly E. coli poisoning which caused kidney failure and hemolytic uremic syndrome. The latter is a condition in which red blood cells are destroyed. The chief physician ordered blood transfusions and an abrupt halt to the IV. He informed us that the volume of fluid pumped into her lifeless body in the past 24 hours could have caused heart failure and killed her. “When kidneys fail, the answer is not to keep pumping fluids. The answer is to find the cause.” Seated beside our daughter, I hung a pillow over the guardrail of her bed. Snatches of sleep could be caught this way. The rosary was woven between my fingers. I clutched the crucifix and recited endless Hail Mary’s.

Days Four and Five in the Upper Room:

Surgery was performed to start dialysis. Blood transfusions were scheduled. “We don’t want to give her white blood platelets” the chief physician informed us. Transfusing platelets would be very risky. We asked what Maria’s chances were. His answer was always the same: “Man proposes; God disposes.” How was this disease contracted? Nobody seemed to know. Maria endured hourly vomiting, morning, noon, and night for days on end. She was awakened at 4:00AM and placed on a crane-type stretcher to be weighed — she could not stand or walk. We were told that the 4AM weighing was necessary for the 7:00AM arrival of the doctor who would determine Maria’s treatments for the day.

Day Six in the Upper Room:

Wednesday arrived as a dark and hollow day. Death hung in the air, as Maria lay a little too still for anyone’s liking. With a sense of urgency the doctor burst into the room to inform us that Maria’s condition had worsened to the point that she needed a platelet transfusion. Tom’s eyes widened as he objected: “I thought that platelets were too risky.” “She needs platelets” the doctor insisted. Her vital signs were slipping and her breathing was labored. The nursing staff thought we might lose her.

Day Seven in the Upper Room:

But we didn’t lose her. The day awakened with the dawn and so did our daughter. At lunch-time I was able to make it to the cafeteria. Walking in I saw a group of doctors who had treated Maria. Their heads turned and they gazed upon me as if upon some spirit from beyond the grave. The seriousness of our daughter’s condition penetrated every fiber of my being and filled me with dread. But God was there. I leaned on Him and He took me by the hand and helped me to place one foot in front of the other.

Days Eight and Nine in the Upper Room:

Praying seemed impossible. It was not clear that God and I were still on speaking terms. It was as if I’d never prayed. A deafening silence engulfed me. I clutched my rosary like it was a lifeline to the Lord. Intermittent Hail Mary’s recited void of thought or feeling sustained me. God dispensed slow, silent, solemn lessons in surrender. The suffering was offered up.

Pentecost Sunday arrived and Tom and I left the hospital to attend Sunday Mass. As we exited the hospital, shining sun blinded our eyes. We found ourselves enveloped by warm spring air so sweet with the smell of daffodils and so alive with the sounds of happily singing birds, it was as if we had been transported to some distant and delightful land void of suffering or pain. I pondered how God’s creatures could possibly sing at a time like that, as I marveled at how easily life and those living it had gone on without us.

It was good to get to Mass. Jesus greeted us there in the Blessed Sacrament as though He was a long-lost friend. He strengthened us and filled us with resolve. Returning to the hospital, we walked slowly down the sterile, lonely and cold corridor to intensive care. Deep laughter was ringing through the halls. Nurses came running from different directions. We were stunned to find Maria sitting up. She was laughing as though the whole ordeal had never happened, as though everything about the last nine days had not just flipped our family on its head.

It’s Pentecost Sunday. The Holy Spirit has arrived with His healing hand. Our Lord is bringing our time in the Upper Room to an end.

Over the next few days, the nurses pulled the tubes and disconnected the wires. Maria was released from her connections to various medical contraptions like a dirigible being released from its stakes for flight. God is merciful. Surgery was performed to remove the dialysis. Maria soon stood and walked on wobbly legs. Everyone clapped as if for a toddler taking her first baby steps, and Maria giggled like a toddler at the applause. Maria was moved to general pediatrics.

She departed the hospital with residual blood pressure problems that continued for a year and with intermittent dizziness that plagued her for several years after that. But those difficulties eventually resolved themselves. Having completely recovered, she is now a healthy 13-year-old who swims on a swim team, runs cross-country and plays clarinet in an honors band. One would never suspect what she went through. But Tom and I will never forget our time in the Upper Room. It changed us. Even when things are well, we pray often, and we pray hard. God let us leave the Upper Room. At any time, He can call us back.

“Very often illness provokes a search for God and a return to Him” (Catechism of the Catholic Church 1501).