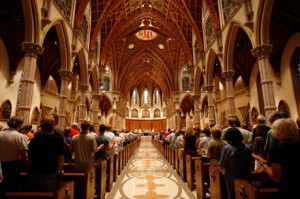 As the implementation date for the new English translation of the Roman Missal approaches (less than 180 days away at this point) now seems an appropriate time to address some of the more common misconceptions that are floating about. We’ll begin with the following three:

1. The new English translation of the Roman Missal isn’t necessarily better than the one currently in use, it’s just different!

Although comments of this nature are likely motivated by a sincere concern for the sensibilities of the faithful, I think they are ill advised and ultimately harmful.

The Church is both human and Divine, and we know that the human contribution will often stand in need of improvement as She journeys toward Heavenly perfection. Such is the case with the current translation, and acknowledging as much shouldn’t be a source of scandal for any of us.

So, why a new translation?

There is an old Latin phrase that comes to mind, lex orandi, lex credendi – loosely translated, as we pray so too do we believe. As such, the words of Holy Mass should communicate the richness of Church doctrine accurately at all times. Presently, however, they don’t always do so very well, and the new translation is an attempt to capture in English the theological clarity and depth of meaning that is found in the Latin original.

Now, we can spend the next six months lamenting whatever shortcomings may exist in the present text, but I think we’re all better served by looking forward and preparing ourselves to receive the improvements to come.

Secondly, the current translation was carried out using a method (called “dynamic equivalence”) that attempted to present the meaning of the Latin text apart from its form; putting it into the so-called “language of the people.” In so doing, translators deliberately produced “active voice” translations even when the original text was phrased in the “passive voice,” and this brought about some negative consequences.

For example, in the current translation of the Roman Canon the priest now addresses God the Father saying, “You know how firmly we believe in You and dedicate ourselves to You.” There’s an inappropriate air of presumptuousness and self-affirmation evident in these words, is there not?

The corrected translation, however, will recapture the prayerful humility of the original text as the priest will petition the Father saying, “Remember, Lord, your servants and all gathered here, whose faith and devotion are known to you.”

Subtle, perhaps, but don’t underestimate the impact a shift in orientation back toward the Lord can have! Wherever the current liturgical text is overly focused on the speaker, it contributes to the erroneous perception of Holy Mass as an essentially human act of praise and worship when, in fact, it is truly nothing less than a Divine action – it is the worship of Jesus Christ offered to the Father into which we are invited to participate by the power of the Holy Spirit.

In addition to this, the new translation will also make more explicit the very important connection that exists between the text of the liturgy and its principal source – Sacred Scripture, a truth that is sometimes obscured in the current translation. (E.g., “Lord, I am not worthy that you should enter under my roof…”)

Look, change is never easy, not even change for the better. All of us are being called to roll up our sleeves and get to work in order to prepare for the new text, and we need to be realistic – no one is motivated to undertake a substantial effort like this for a merely lateral move; e.g., “different not better.”

Well, the good news is, Holy Mother Church isn’t asking us to do anything of the sort. We are about to receive what can properly be called a correction and therefore a vast improvement, and we needn’t be bashful about saying so.

2. The new translation of the Roman Missal with its elevated, formal, sacred language – which is not the way most people speak – will make “active participation” more difficult. It is, therefore, a step away from the reforms encouraged at Vatican Council II.

First, it’s important for us to understand what “active participation” truly means. (I wrote on this topic in greater detail here.) HINT: It isn’t what most people think it is.

Secondly, it’s worth noting that the Council employs the word “sacred” in the Constitution on the Sacred Liturgy more often than in any other document it produced – more than 60 times in reference to the liturgy and those things associated with it; e.g. “sacred music, sacred art, sacred buildings, sacred vestments, sacred ministers, sacred images,” and the list goes on.

The Council Fathers tell us that “every liturgical celebration, because it is an action of Christ the priest and of His Body which is the Church, is a sacred action surpassing all others” (cf SC 7). This means that every single thing used in the celebration of Holy Mass – all that is perceptible to the senses – must also be sacred lest it serve to distract the faithful from the transcendent presence and action of Christ into which they are invited as participants. This would include, of course, the language that we use and the words that we speak at Holy Mass.

“Sacred” simply means “set apart for Divine worship; proper to things religious, not profane or proper to things secular.” When applied to language, this naturally means speaking in a manner unlike the way in which we typically engage in ordinary conversation and commerce. And guess what? English speaking Catholics already pray this way very comfortably in the Mass as the “Our Father” has always employed an elevated manner of speaking.

The more formal wording and sentence structure in the new translation will serve to elevate our awareness of what is actually taking place at Holy Mass, thereby enhancing our ability to participate in the manner in which the Council intended.

3. Yes, but the unfamiliar words and complicated sentence structures go against the Council’s own directive stating, “The rites should be distinguished by a noble simplicity; they should be short, clear, and unencumbered by useless repetitions; they should be within the people’s powers of comprehension, and normally should not require much explanation” (SC 34).

Let’s be clear about what the Council Fathers are saying. One of the most important things that should be communicated in the celebration of Holy Mass is that we are taking part in something far greater than ourselves; something so great and so profound, in fact, that the Church properly refers to it as Sacred Mystery.

The Council is NOT saying that the perceptible signs in the liturgy are to be so simplistic as to make Holy Mass entirely comprehensible. This, in fact, is impossible! It is the very nature of the sacred liturgy to exceed the human capacity for full comprehension. It is not a finite subject to be taught; rather it is an invitation to enter into Divine union with the ineffable Christ that we might co-operate with Him in the work of Redemption.

By mistaking the conciliar exhortation above as a license to “dumb down” the rite (particularly in its English texts) in an attempt to fully communicate the indescribable glory of Christ’s operative presence in the Mass, we have anchored the feet of the faithful to the here-and-now at a time when their hearts and minds should be straining for elevation, into an experience of the Divine union that is offered.

Ironically, it is the current text – in spite of the translators’ attempts to make it readily comprehensible – that requires a great deal of explanation in order to alert the faithful to the fact that, appearances aside, we really aren’t taking part in the community’s act of praise and worship; rather, we are participating in something infinitely greater – the very work of God.

Narrowing the field down to just these three wasn’t easy, but was necessary in the interest of space. I’d like to invite readers to email me via the website below to suggest additional questions and/or possible misconceptions that they would like to see addressed in future columns.