Trending Now
You are at:Home»Featured»Can “Brave-ry” be Over the Top?
By Leticia Velasquez on July 16, 2012 Featured, On TV and Movies 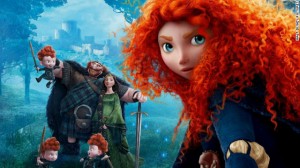 The “wee bairn” Merida, is a Scottish medieval princess who is irresistible as a tyke, romping with her parents, yet sadly morphs into a Disney-esque stubborn, roughneck runaway teen who wants to remake her queenly and gracious mother Elinor.

Rejecting the ridiculous suitors, that according to clan tradition, she must choose from, Merida flees into the woods on her gigantic horse, shooting arrows from her bow as a cowboy would shoot rounds into the air.

I was frustrated with the triteness of the plot and the heavy-handed feminism until Merida’s wishes come true and she finds a way to change Mom. Then, things got interesting, and a bit less dogmatic.

Brave is a traditional fairy tale story, with dark woods, wisps, and witches, crafted with a Tangled-like modern edge. But Merida is  missing Rapunzel’s charming blend of boldness and vulnerability. She’s too bristly and brash to be likeable, even if she is a redhead. Bravery as a character trait is overplayed and ends as a tragic flaw.

Interesting discussions will ensue between mothers and teenage daughters who see this together, and for this I thank Pixar. You don’t have to condescend to women, since we can enjoy wearing our dresses and riding horseback — just not at the same time. Dramatic highland scenery, and a fair-to-middling soundtrack don’t make up for the fact that there is not one decent-looking man in the film who is sober and can shoot straight. Merida’s father Fergus is given shabby treatment as a boorish oaf, but the man-bashing is rescued by a good-natured parody of Braveheart. Sorry, Mel, you had it coming!

It might not be for under age seven set. They have higher standards for princesses and those are some terrifying bears! They might want to wait till it comes out on DVD.

Hyperactive little brothers add a few welcome moments of levity in a somewhat dark film with an acceptable ‘lesson’. But it “coulda had a wee bit more class, than to show the cleavage on the servant woman, ya know what ay mean?”