Trending Now
You are at:Home»Featured»The Gift of Spiritual Motherhood
By Meg Hunter-Kilmer on July 16, 2012 Featured, Parenting 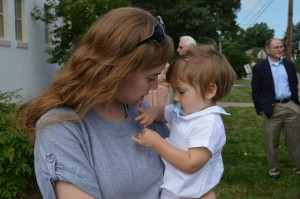 I’ve been stumbling over a habit I have of referring to “my kids.”  I’m sure that’s confusing to those of you who don’t know me.  “Wait, didn’t I see something about consecrated virginity?  But she has kids?  Hang on, now….”So rather than footnote it every time, I thought I’d write you a good long explanation.

I have hundreds of children.  A few godchildren, but mostly spiritual children, students I’ve taught and teens I’ve spoken with at retreats or camps or talks.  The relationship I have with these kids of mine is sometimes just a few hours long and sometimes lasts for years and changes us both.  I call them my kids because I am their mother–one of many mothers they have, God willing.  I call them my kids even when they’re 25, because when I say that I don’t mean that they’re children.  I mean that they’re mine.

When I was first discerning a vocation to consecrated life, I went to see my spiritual director.  I was feeling led to enter a convent that summer but my relationship with my students was holding me back.

“I just love these kids so much, Father.  Maybe that’s God’s way of telling me not to leave them.”

“Oh, that doesn’t mean you’re supposed to stay.  That just means you already have a consecrated heart–you already love them with a mother’s love.”

I had been wrestling with my vocation, certain that Christ was calling me to be his bride but still longing for marriage and motherhood.  I had offered my barrenness as a sacrifice to God but I remember sitting in a movie theater watching a movie featuring a pregnant woman.  I sobbed into my sweatshirt (have I mentioned that I’m super-emotional?) and prayed, “Lord, I will give that up.  But I will never stop wanting it.”

Like many women, I ached to be a mother.  I wanted so badly to give myself in love to people–and, to be honest, to be loved and needed in return.  I think it’s a universal longing–the desire to love and be loved–and for many women, this manifests itself as a maternal instinct, even for those who aren’t physical mothers.  I’d read about women feeling like mothers to their students or their friends and it just struck me as counterfeit–some sham replacement for real motherhood that was supplied us to keep us from being bitter when we were old maids (and yes, at 24 I did kind of consider myself an old maid.  Catholic college will sometimes do that to a person).

But then I began to experience this phenomenon of spiritual motherhood.  When I first started teaching, I loved my kids so fiercely that I honestly felt creepy.  I remember almost crying from pride while watching a pep rally, of all things, and thinking that there must be something wrong with me if I loved these random kids so much.  It wasn’t until I began to recognize my vocation that I realized that my love for these kids was maternal.

These three lived with me for three summers in a row. Diapers and nightmares and tantrums and all.

There is something very real about spiritual motherhood.  I have never borne physical children, so comparisons I make will have to be viewed in that light; I have, however, been a foster mother to young children, so I can relate to the all-consuming task (and love) that is physical motherhood, both biological and adoptive.

No, it’s not the same, but neither is the way you are a mother and the way my sister is a mother.  Because two types of motherhood are different doesn’t make one any less real.  They aren’t the same—and yet, somehow, they are.

As a teacher and minister and (God willing) a future bride of Christ, I love His children as my own.  Certainly, I don’t have the same motherly love for every one of the hundreds of children who have belonged to me—my heart couldn’t take it—but I offer myself completely to each one and some few dozen have become as dear to me as I can imagine any physical child of mine being.  I pray for them desperately, I ache with love for them, I miss them terribly when they go off to college.

There’s a reason people don’t have 20 kids at a time–it takes a lot out of you.

Just as a physical mother does, I suffer for my children.  No, I’m not theirs 24 hours a day, but I feel the weight of their souls as strongly as many physical mothers.  My knees are bruised for praying for them, my face lined with the joy of watching them repent and the agony of knowing I can’t make them saints.  Daily I pour myself out for them and daily they roll their eyes and ignore me, sometimes embracing sin just to spite me.  Yes, I am a mother—and a mother almost exclusively of teenagers, God help me.

My children are so often broken before they even get to me.  I love them with everything I have, but I am not the most important force in their lives.  I spend my life working damage control, trying to love their broken hearts back together, knowing that I will often fail.  I plant the seeds and I hope, but most of the fruit is borne years later, after they’ve moved away and fallen out of touch.  I watch my children leave the fold and I never know if they’ve come back.

Unlike physical mothers, I usually have these children for only a few years after high school before they move on and mostly forget me; unlike physical mothers, I often have absolutely no impact on them after they leave my care.  I can’t call them every Sunday if they don’t want to hear from me; I can’t always step back into their lives to invite them lovingly to conversion.  At a certain point, I have to let them go.

The love of a mother is the love of the Cross.  We pour out our lives for our children and they spit in our faces.  Some few stand by and love us in return.  The rest may, by God’s grace, be converted by the empty tomb, by the hole in His side, by the tongues of flame.  We love and we pray and we hope—and we leave them in God’s hands.  This is motherhood—spiritual and physical.

I feel for those of you without physical children who view spiritual motherhood as a consolation prize, a phrase coined to silence those women who suffer for not being physical mothers.  I felt this way for years before discerning my vocation, and perhaps I accept it more joyfully now because, in a sense, it’s something I’ve chosen.  But real holiness is rejoicing in the suffering we’ve chosen and in the suffering that’s been forced upon us.

I’m not exactly sure of my point in writing this –maybe just to give you a glimpse into my heart?

Maybe encouragement for those who long to be mothers that you are mothers.  You are able to love the souls around you with a mother’s love and to transform them through that.  It’s not the same, but it’s not less, either.  Motherhood is a gift offered to all women–see 1 Tim 2:15; if it’s not open to everyone, those of us who can’t bear children are in serious trouble.

Maybe I just want to ask you all to take a moment to thank your spiritual mothers.  Godmothers, teachers, friends–there are women in your life who’ve held you before the throne of God or wrapped you in arms of love or taught you to be honorable and virtuous.  Many of them don’t get phone calls on Mother’s Day or presents at Christmas.  They love you because they choose to, not because you were handed to them.  Spiritual motherhood is often a thankless job; let’s change that today.

Then again, maybe I just want something to link to when I say something about “one of my kids.”