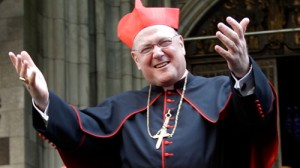 My most recent column, “In Defense of Cardinal Dolan,” generated quite a bit of feedback. Some readers were convinced that it reflected a sense of false hope born of naiveté; others thought they detected a rather large dose of satire. For the record, one of these assessments is correct, but I’ll leave it to you to decide which one.

The bottom line is this; the gravely serious charges ascribed to the Cardinal’s detractors as described in that column are no longer a matter of speculation; that is, apart from one very important, as yet unknown, detail; one that has the potential for turning this entire affair on its head. (Sorry for baiting, but you’ll have to keep reading to discover it.)

What is most important now is that we come to terms with Cardinal Dolan’s decision.

Ed Mechmann of the Archdiocese of New York touched on the crux of the matter when he blogged, “The politicians who speak at the [Al Smith] dinner are not being given any honor.”

Can he be serious?

I’d really like to see a copy of the formal invitation that was sent to Barack Obama in the name of the Cardinal Archbishop. If I was a betting man, I’d be willing to wager that it reads something like this:

“His Eminence is pleased to request the honor of your presence…”

“Oh, but in that case,” an apologist might object, “the Cardinal is the one being honored!”

I’m not sure which concept is more disgusting, but in any event, consider a page on the Al Smith Foundation website listing past “luminous guest speakers [that]have stepped from the world stage to honor and entertain Annual Dinner audiences with their light humor and political savvy.”

There it is again, honor. So, maybe it’s true. Maybe the Cardinal will be honored (not to mention, entertained) by that “luminous” enemy of the Church, Barack Obama.

Either way, among the previous luminaries listed on the Al Smith website is the “Honorable Barack Obama;” one of the speakers at the dinner in 2008.

And now here we are, one HHS mandate, four years and some 5 million innocent human beings later and one wonders, is Cardinal Dolan still comfortable applying the title “honorable” to Barack Obama? If not, why did he invite him?

More to the point is the fact that dining with Cardinal Dolan as his invited guest, whenever it may be, (like Chick-fil-A, for instance) is an honor. Heck, a high-five from a Prince of the Church would be an honor! The only people who don’t recognize that fact (Obama undoubtedly one of them) are those who have no concept of what it means to say that our bishops are the Successors to the Apostles that were handpicked by Christ.

The sad fact of the matter is that many in the sacred hierarchy suffer from just such an identity crisis themselves; their behavior indicating that they see themselves more as political operatives and consensus builders than Fathers who are called sanctify, teach and govern with the authority of Christ the King.

Does that apply to Cardinal Dolan? Ask me the day after the Al Smith Dinner and I’ll let you know.

As of this moment, everyone who gives a hoot about the Church has every reason to be concerned that a terrible scandal is in the offing. Naturally, faithful Catholics, after responding so generously to the Fortnight for Freedom, feel betrayed.

Can anyone be surprised by the outrage being expressed by those who fully expect to see, just weeks before the election, images of Barack Obama – an unapologetic enemy of Christianity who is Hell bent (literally) on propagating intrinsic evil – clinking wineglasses and laughing it up with the nation’s highest profile prelate?

I certainly don’t; in fact, you can count me among the outraged. The actual scandal, however, has yet to take place and there is still a chance (however small) that Cardinal Dolan is simply laying the groundwork for a new shot heard ‘round the world at a time when we desperately need one.

Naïve satirist that I am, I cannot help but hope and pray that there’s a whole lot more to this story than meets the eye, and if I could write the script, the end will look something like this:

The ever smug Barack Obama will walk into the Al Smith Dinner on October 18th bearing the kind of condescending smirk that only a liberal can muster; certain that he is about to plunge yet another knife into the heart of the Church thanks to the graciousness of his trusting host.

But what the wolf is about to discover is that this shepherd is no ordinary dove; rather, he’s wise as a serpent and he’s ready to strike. It’s a set-up; an opportunity for Cardinal Dolan to set things right in a way that will make crystal clear the fact that the Church, and our nation, is doing battle not just against bad ideas, but against evil itself.

At long last, the two-faced scoundrel from Pennsylvania Avenue will receive at least some of the just reward he deserves for making the mistake of treating Cardinal Dolan like a buffoon some nine months earlier when he looked the prelate square in the eye and lied about his high regard for the Church and his unwillingness to attack her via mandate.

Obama’s punishment? The one liars deplore most: listening to the truth.

As the fine dining concludes and the time for hilarity draws near, the unsuspecting Obama will be the picture of a man victorious, believing the photo-op coupe de grace is already his. But what he doesn’t yet realize is that he brought a knife to the wrong kind of fight. You see, the Cardinal Archbishop – the man who solemnly pledged before the Almighty to defend the flock unto martyrdom is wielding the sword of truth – and there’s no escaping its razor-sharp edge.

Oh, sure, Obama will do his level best to grin through the humiliation of having to listen to the Gospel of Life as Cardinal Dolan, with neither malice nor fear, does precisely what he’s been ordained to do; namely, to preach the Word of God to both heathen and believer alike, especially in times of trouble.

But, try as he might to avoid it, the watchful eye of the media will capture in the face of Barack Obama the unmistakable glare of a man who hates the Lord and the Church He founded.

Now don’t get me wrong, even if this happens the sun will rise the following morning on our enemies just as it will on us, and rest assured their hatred will be multiplied tenfold, but so what? At least for one night the children of the Church in the United States will go to sleep confident that their shepherd has a backbone as sturdy as his crozier, and what’s more, he’s on duty; watching over the flock.

Do I think any of this is likely?

No, of course not, but then again, neither do I think it impossible. And so, we will pray.