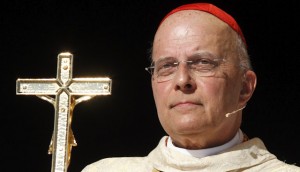 Chicago’s Francis Cardinal George is warning the HHS contraception/abortifacient mandate will close Catholic hospitals and universities or force them to secularize, a process he calls “a form of theft.”

If the regulation is not rescinded, the Catholic Church will be “despoiled of her institutions,” he said in a column printed on CatholicNewWorld, likening the proposed policies to the restrictive “freedom of worship” allowed in the Soviet Union.

“What will happen if the HHS regulations are not rescinded?” he asked. A faithful ministry must choose between selling itself to a non-Catholic group, paying “exorbitant annual fines” until going bankrupt, breaking its ties to the Church’s “moral and social teachings and the oversight of its ministry by the local bishop,” or closing down.

He urged people to purchase a copy of the Archdiocesan directory “as a souvenir,” pointing to the page containing a list of Catholic hospitals and health care institutions.

“Two Lents from now, unless something changes, that page will be blank.”

The Obama administration’s rhetorical shift from supporting “freedom of religion” to “freedom of worship” paralleled an earlier shift in Russia, he said.

“Freedom of worship was guaranteed in the Constitution of the former Soviet Union,” Cardinal George said. “You could go to church, if you could find one. The church, however, could do nothing except conduct religious rites in places of worship—no schools, religious publications, health care institutions, organized charity, ministry for justice and the works of mercy that flow naturally from a living faith. All of these were co-opted by the government. We fought a long Cold War to defeat that vision of society.”

“The State is making itself into a church,” he stated.

Earlier this month, he wrote in a brief online reflection, “The laws that used to protect us are now being used to weaken and destroy us, and this quite deliberately.”

He sounded a similar alarm about the mandate, condemned by every Catholic bishop, saying its “long-term effect is that the Catholic Church will be stripped of the institutions that are her instruments for public service.”

“That’s not the country I was born in,” he said.

The administration’s development and promulgation of numerous policies opposed by the Catholic Church and other faithful Christians also appeared to the cardinal to be unprecedented. In an apparent reference to the Obama administration’s appeals to liberal nominal Catholics and administration officials like Joe Biden and Kathleen Sebelius, he wrote,  “This is the first time in the history of the United States that a presidential administration has purposely tried to interfere in the internal working of the Catholic Church, playing one group off against another for political gain.”

The church leader, who presides over the archdiocese where the president lives, has led the pro-lifeopposition to health care coverage for abortion.