Trending Now
You are at:Home»Featured»Catholic College Would Shut Down Before Submitting to Fed’s Contraceptive Mandate
By Patrick B. Craine on November 25, 2011 Featured, Life Issues & Bioethics 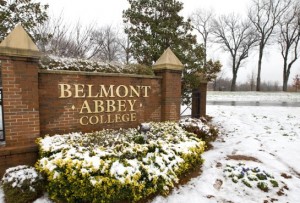 The president of Belmont Abbey College in North Carolina says they would rather close their doors than submit to a mandate by the Obama administration that threatens to force Catholic institutions to cover abortifacient drugs, sterilizations, and contraceptives in their health plans.

“I believe we would go there,” said Dr. William Thierfelder, according to the Gaston Gazette, at a press conference last Friday after they launched a lawsuit against the Obama administration. “The point is I don’t think we’re going to have to get there. There’s many steps in between that we can take before we come to that conclusion.”

The college’s suit alleges that the Department of Health and Human Services (HHS) has infringed upon Belmont Abbey’s first amendment freedom of religion by requiring employers to offer health insurance coverage for sterilization and contraception, including the abortion-inducing drugs Plan B and Ella. The directive was issued as part of the Affordable Care Act, also known as Obamacare.

The HHS directive, which takes effect Aug. 1, 2012, includes a religious exemption, but the United States Conference of Catholic Bishops has argued that it is far too narrow to cover Catholic colleges and other institutions who service members of other faiths.

According to Thierfelder, “not even the ministry of Jesus and the early Christian church would qualify as religious because they did not confine their ministry to their co-religionists or engage only in a preaching ministry.”

The Becket Fund for Religious Liberty, which is representing Belmont Abbey, argues that the directive forces Belmont Abbey to choose between holding to its religious beliefs or providing its employees and students with health insurance.

Thierfelder said the lawsuit is not about imposing Catholic beliefs on others, but rather to uphold their own constitutionally-guaranteed freedom of religion.

“This is not just a Catholic issue. This affects every American and their right to freedom and the right of conscience,” he insisted.  “If the government can compel private organizations to abandon their conscience as a condition of serving the public, what can’t the government do?”