Trending Now
You are at:Home»Featured»Muslim Persecution of Christians: October, 2011
By Raymond Ibrahim on November 25, 2011 Featured, Those in Need 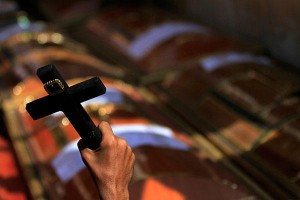 Egypt’s Maspero massacre—where the military killed dozens of Christians protesting the destruction of their churches—dominates October’s persecution headlines. Facts and details concerning the military’s “crimes against humanity” are documented in this report, and include videos of armored-vehicles running over civilians, a catalog of lies and deceitful tactics employed by Egypt’s rulers and state media, and other matters overlooked by the West.

More damning evidence continues to emerge: not only did Egypt’s military plan to massacre Christians to teach them a “lesson” never to protest again, but “death squads” were deployed up buildings the night before to snipe at protesters. Instead of trying the soldiers who intentionally ran-over demonstrators, the military has been randomly arresting Copts simply “for being Christian.” Finally, the fact-finding commission of Egypt’s National Council for Human Rights just submitted its report which, as expected, “white washes” the military’s role, “asserting that no live ammunition was fired on the protesters by the military, as the army only fired blanks in the air to disperse the protesters,” a claim eyewitnesses reject out of hand.

Meanwhile, not only are Western governments apathetic, but it was revealed that “Obama’s top Muslim advisor blocks Middle Eastern Christians’ access to White House.” Newt Gingrich asserted that Obama’s “strategy in the Middle East is such a total grotesque failure” and likened the “Arab spring” to an “anti-Christian spring.” Ann Widdecombe accused the British government of “double standards in its threats to cut aid to countries which persecute gay people while turning a blind eye to persecution against Christians.” Even Christian pastors in the West, apparently more concerned about promoting interfaith dialogue with Muslims, are reluctant to mention persecution to their flock

Categorized by theme, the rest of October’s batch of Muslim persecution of Christians around the world includes (but is hardly limited to) the following accounts, listed according to theme and in alphabetical order by country, not necessarily severity.

Afghanistan: Ten years after the U.S. invaded and overthrew the Taliban—at a cost of more than 1,700 U.S. military lives and $440 billion in taxpayer dollars—the State Department just revealed that Afghanistan’s last Christian church was destroyed. The report further makes clear that the Afghan government—installed by the U.S.—is partially responsible for such anti-Christian sentiments, for instance, by upholding apostasy laws, which make it a criminal offense, ,punishable by death, for Muslims to convert to other religions.

Indonesia: Muslims and authorities expelled Christians from their church and shut it down “for allegedly engaging in ‘proselytizing’ in a predominantly Muslim area.” As in previous instances when churches were seized, “the fundamentalists were aided and abetted by the local administration.” Also, the Muslim behind a September church attack that left three dead confessed that he was operating under his jihad leader’s orders, “based on the Koran and Sunna.”

Kazakhstan: The Muslim majority nation enacted new laws further restricting freedom of religion: “All registered churches must now re-register with the government, and only churches meeting new criteria will be registered.” Accordingly, “police and secret police agents reportedly raided a worship meeting of the officially registered Protestant church New Life, saying that under the new Religion Law the congregation ‘cannot meet outside its legal address.’ During the raid, a 17-year old woman was hit by a policeman, leaving her unconscious.”

Sudan: Soon after President Bashir “confirmed plans to adopt an entirely Islamic constitution and strengthen sharia law,” “emboldened” Muslims, “claiming that Christianity was no longer an accepted religion in the country,” attacked Christians trying to construct a church. Likewise, authorities threatened to demolish three church buildings “as part of a long-standing bid to rid Sudan of Christianity.”

Egypt: A Christian student was strangled and beaten to death by his Muslim teacher and fellow students for refusing to cover his cross. When the headmaster was informed of the attack in progress, he ignored it and “continued to sip his tea.” In the words of one prominent Egyptian commentator: “a teacher forced a student to take off the crucifix he wore, and when the Christian student stood firm for his rights, the teacher quarreled with him, joined by some of the students; he was beastly assaulted until his last breath left him.”

Saudi Arabia: A Colombian soccer-player “was arrested by the Saudi moral police after customers in a Riyadh shopping mall expressed outrage over the sports player’s religious tattoos, which included the face of Jesus of Nazareth on his arm…. A similar event occurred in Saudi Arabia last year when a Romanian player kissed the tattoo of a cross he had on his arm after scoring a goal, which also caused public outrage.”

Maldives: Police arrested a 30 year-old teacher from India for having a Bible and rosary, and finally deported him after a two-week interrogation. According to the principal, he “was a very good teacher, we’ve not had any complaints of him in the past.” Such cases are not aberrant: “Last year, Maldivian authorities rescued another Christian teacher from India when Muslim parents of her students threatened to throw her into the sea for ‘preaching Christianity’ after she drew a compass in class, which they alleged was a cross.”

India: A mufti summoned a Christian priest to appear before his court: according to the mufti, the priest “is involved in converting young Muslim boys and girls to Christianity. This warrants action as per Islamic law…. I will take all necessary measures in exercise of the powers vested in me by Islamic Sharia.”

Iran: Militants with suspected ties to Iranian security threatened to kill nearly a dozen evangelical Christians who fled Iran; unless they “repent and ask forgiveness” and return to Islam, they must die. Likewise, a “group of four officers engaged in a commando-style raid on the house” of a Muslim convert to Christianity, arresting him, confiscating his Bible, and “transferring him to an unknown location…. His family was also threatened to remain silent and not to talk about this incident to anyone.” Also, a Christian named “Muhammad” was arrested, interrogated “for the charge of Christianity.” And Iran’s Supreme Court has ordered the retrial of the pastor sentenced to death for refusing to renounce his Christian beliefs, partially because “Iran is feeling the pressure” of the growing international community supporting the pastor.

Pakistan: A female prison-officer assigned to provide security for Asia Bibi, a Christian mother of five sentenced to death on “blasphemy” charges, beat her, “allegedly because of the Muslim officer’s anti-Christian bias, while other staff members deployed for her security looked on in silence.” A new report reveals how the nation’s legalization of blasphemy laws has given great rise to Christian persecution.

Egypt: The military threatened a Coptic monastery with a “new massacre” in an attempt to demolish the monastery’s fence “which guards it from unauthorized visits and criminals.” The military has “stormed several monasteries since the January 25 Revolution, demolished fences, and fired on monks and visitors.” Also, a Christian man sentenced to three years’ imprisonment for “insulting the military” has been ordered to a mental health hospital, from which, according to some analysts, patients often emerge as “devastated human beings.”

Iraq: A new report entitled, “The double lives of Iraq’s Christian children” tells of their suffering—”If the children say they believe in Jesus, they face beatings and scorn from their teachers”—as well as the struggle of their parents. “The first years of my faith,” says a father, “I brought so many people to church, because I was motivated, so excited. Now I don’t encourage anyone to be a Christian, because in my experience it is very hard.”

France: Stone-throwing Muslims attacked Christians during a Catholic celebration, although the media largely ignored it: “it would seem that the media silence on these facts, which are occurring more and more frequently, serves to exonerate, even protect, the Muslims in their racist and anti-religious acts.”

Pakistan: Along with one dead man, “two dozen Christians including children, men and women were seriously injured” when “Muslim gangs” hired by an influential Muslim attacked them “to grab a piece of land” which the church had purchased to build an orphanage. Also, Muslim landowners raided a Christian home, beat a sick father and abducted two brothers, whom they claim are in debt; the kidnapper added an extra 70,000 rupees in ransom. “The men’s mother tried to file a report with police , who refused because one of the suspects is a fellow police officer,” not to mention also a Muslim.

Turkey: The Education Ministry in Ankara published a 10th grade textbook which distorts the role of Christian Assyrians, “denouncing them as traitors who rebelled against Turkey.” Still denying the historic slaughter of Christians, “today’s Turkish Government is not hesitant to distort historical events by inverting victim and perpetrator… About half of the Assyrian population, were killed or died from starvation or disease in a series of killings orchestrated by the Ottoman Turkish government during World War I.”

USA: A Muslim convert to Christianity was violently attacked by Muslims because of a poem “which expresses pain over the loss of six million Jews at the hands of the Nazis.” The attackers carved the Star of David on his back with a knife “while laughing as they recited his poem.” In a separate incident, a Muslim physiotherapist “tore into” a Christian patient, saying her faith was “wrong” and had “killed more people than any other religion.” She later wrote: “I found Mr. Ali to be extremely racist against my Christian faith. I have had doctors, nurses and staff of all different religions look after me but this is the first time I’ve been treated by such a bigoted man as Mr. Ali.”

As usual, Pakistan—which, along with Egypt, oddly missed being categorized as a “country of particular concern” in the State Department‘s recent religious freedom report—dominates the headlines regarding the sexual abuse of Christian women:

Iraq: “Two Christians were murdered in northern Iraq this week; their deaths come as three kidnapped Christians were released following the payment of a hefty ransom.” A source in Iraq laments: “The attacks on Christians continue and the world remains totally silent. It’s as if we’ve been swallowed up by the night.”

Nigeria: Months after Muslims from Boko Haram murdered a pastor, another pastor was targeted and murdered. The jihadists have “claimed responsibility for several church bombings and other attacks;” many Christians have fled the region, and some churches have shut down as many of their flock have been killed. Likewise, three Muslim soldiers, in the context of subduing civil unrest, “shot and killed a Christian mother of five” and a Christian boy, without “any justifiable reason.”

Somalia: Weeks after a convert to Christianity was beheaded, al-Shabaab, “who have vowed to rid Somalia of Christianity,” decapitated another 17-year-old Christian in his home: “It is usual for the al-Shabaab to decapitate those they suspect to have embraced the Christian faith, or sympathizers of western ideals.”

Accordingly, whatever the anecdote of persecution, it typically fits under a specific theme, including hatred for churches and other Christian symbols; sexual abuse of Christian women; forced conversions to Islam; apostasy and blasphemy laws that criminalize and punish with death those who “offend” Islam; theft and plunder in lieu of jizya, tribute expected from second-class citizens, or dhimmis; overall expectations for Christians to behave like cowed dhimmis (second-class citizens); and simple violence and murder. Sometimes it is a combination.

Because these accounts of persecution span different ethnicities, languages, and locales—from Morocco in the west, to India in the east, and throughout the West wherever there are Muslims—it should be clear that one thing alone binds them: Islam—whether the strict application of Sharia, or the supremacist culture born of it.