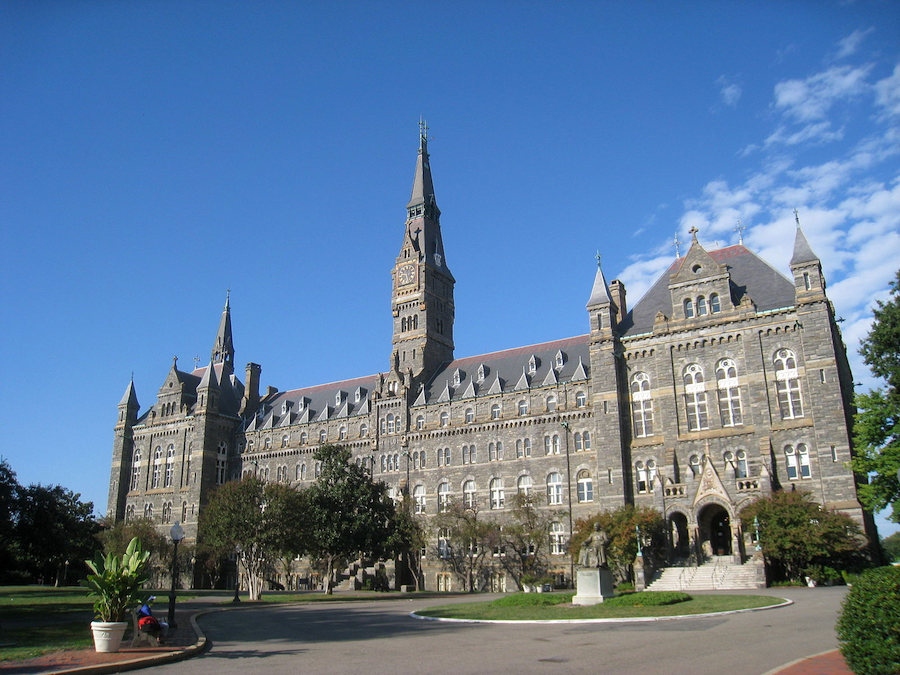 Georgetown University has defended next month’s lecture by Planned Parenthood President Cecile Richards by claiming a commitment to “the free exchange of ideas.” Catholic colleges absolutely should expose students to the arguments against Catholic teaching — including those about abortion, contraception and sexuality — but an unfiltered lecture from someone who has no respect for the truth is not the appropriate, or responsible, way to explore those issues.

That’s especially true if the lecturer is Cecile Richards, who is responsible for the deaths of more than 2.8 million babies since taking charge of the Planned Parenthood Federation of America in 2006.

The Cardinal Newman Society, the Archdiocese of Washington and students in the Georgetown Right to Life club have opposed the platform for Richards to spout her anti-Catholic propaganda at the nation’s oldest Catholic university. An online petition demands that Georgetown rescind the invitation to speak on campus.

But several students who were interviewed by EWTN Nightly News on March 9 supported Georgetown’s scandalous decision to allow Richards speak on campus, arguing in the name of academic freedom and freedom of speech.

“The point of having an academic institution is that you explore all sides of the issues,” one student told EWTN, although there’s no indication that anyone will be speaking alongside Richards to refute her viewpoints.

What seems to be lost is any appreciation for the distinct purpose and mission of a Catholic educational institution. Many want to view and evaluate Catholic colleges in the same light as secular colleges, which don’t recognize the truths of the Catholic faith. But Catholic colleges are “connected with and in harmony with the evangelizing mission of the Church,” as explained in the Vatican document governing Catholic colleges, Ex corde Ecclesiae.

Unfortunately, the administrators and faculty at many Catholic colleges go out of their way to downplay the Catholic identities and religious missions of their institutions, making any distinction from a secular college hardly recognizable. But this is a betrayal of the mission and identity of these colleges, and should not be considered acceptable.

Every Catholic college is meant to assist “in the protection and advancement of human dignity” as an academic institution in which “Catholicism is vitally present and operative.” This includes “recognition of and adherence to the teaching authority of the Church in matters of faith and morals.”

The moral teachings of the Church aren’t just ideas to be debated in the same way some colleges would debate the best type of economic system, or who was the greatest philosopher. These teachings are Truth inspired by the Holy Spirit. If administrators and professors aren’t interested in respecting or defending that Truth, one wonders what they’re doing at a Catholic college.

Students at Catholic colleges shouldn’t expect the curriculum and campus environment to conform and cater to their beliefs and viewpoints. Students should be challenged by Catholic colleges to “develop a religious, moral, and social sense,” enabling them to acquire or deepen “a Christian way of life that is authentic.” Non-Catholic students, teachers and administrators are called to “recognize and respect the distinct Catholic identity” of the colleges where they work and study.

Both inside and outside the classroom, if students want to explore ideas contrary to Catholic teaching, surely there are plenty of resources and opportunities to do so. Educators and campus ministers should be available to help students who have questions about these issues. Instead of addressing moral issues with controversial speakers whose aim is to lead students away from Catholic truth, it’s far better to present credible speakers who help students know and love God.

Administrators issue disclaimers that the views and actions of student groups don’t represent the college, as Georgetown has done in the case of Richards’ invitation by the student-run Lecture Fund, but colleges bear responsibility for approving these groups and giving access to college facilities and funding. Ex corde Ecclesiae states, “Catholic teaching and discipline are to influence all university activities,” and “Any official action or commitment of the University is to be in accord with its Catholic identity.”

For a Catholic college to give free reign to mock and tear down the moral principles of the faith is nothing short of scandalous, and it is a clear violation of the identity and mission of the institution. Students shouldn’t be shielded from controversial ideas, but Catholic colleges should take seriously their obligation to teach truth, and never knowingly lead students into falsehood.