Trending Now
You are at:Home»Featured»Catholics in Mongolia: Steady Growth in Difficult Territory
By ACN-USA News on June 2, 2014 Featured, Those in Need 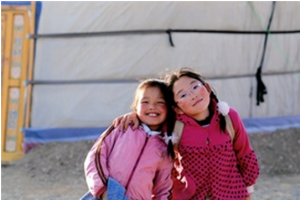 Children in front of a chapel in the Apostolic Prefecture of Ulaanbaatar, Mongolia (© ACN)

According to a local Catholic leader, the Catholic Church is growing steadily in Mongolia, despite all the obstacles it faces.

The Apostolic Administrator of Ulaanbaatar, Bishop Wenceslao Selga Padilla, made his comments while visiting international Catholic pastoral charity Aid to the Church in Need (ACN).

Bishop Wenceslao, originally from the Philippines, has headed the Apostolic Prefecture in this central Asian country since it was set up in 2002.

The collapse of the Soviet Union and the independence of Mongolia allowed for a new beginning, which included a growing interest in the Catholic faith. The post-communist, democratically elected government invited the Catholic Church into the country and established diplomatic relations with the Vatican in 1992.

Wenceslao Selga Padilla came with two priests belonging to the Congregation of the Immaculate Heart of Mary (CICM).

“We started from scratch. The first Holy Masses were read in a hotel. After that we rented apartments and forged initial links with believers through international organizations and the embassies,” Bishop Wenceslao explained.

The living conditions in Mongolia are unusual: the country is about as big as Alaska, but it only has a population of 2.8 million. In the winter, temperatures drop to as low as minus 22 degrees Fahrenheit, while in the summer they rise to as much as 86 degrees.

Around 55 per cent of the population are professing Buddhists and the proportion of Christians is about 2 per cent; the majority of these belong to the Protestant Church.

The number of Catholics is negligibly small, yet it is growing slowly but steadily. According to Bishop Wenceslao, there are at present around 960 adherents. 49 nuns, 20 priests and 2 monks are working in the Apostolic Prefecture of Ulaanbaatar.

Today the Catholic Church has four parishes, as well as schools and social facilities, which are expressly desired by the state. When the Vatican set up the Apostolic Prefecture of Ulaanbaatar in 2002, there were about 114 Catholics living in Mongolia.

At the end of August, 2003, the Saint Peter and Paul Cathedral was consecrated in the capital. The building is reminiscent of a yurt, the traditional tent used by the nomadic peoples of Central Asia.

The predominant religion in Mongolia is Buddhism. Like all religious convictions it was fought fiercely in the Soviet period. With the fall of communism the tide turned. Today many see Buddhism as part of the national identity.

On the other hand, other religions, including Christianity, are regarded as foreign. Profession of Christian faith is therefore only permitted within Church premises.

Young people under 16 may only take part in catechesis with the written consent of their parents, and priests may not be identifiable as such in public.

The interest in the Catholic Church is nevertheless unbroken, even if Bishop Wenceslao observes a certain fluctuation among Catholics.

“Mongolia is in a state of upheaval. People are becoming settled and no longer live as nomads. Then there is a growing materialism; many are turning away again from the faith.”

For the Bishop, however, this is no reason to neglect pastoral initiatives, which are also supported by ACN. On the contrary, “Since the end of communist rule, people have basically opened up to the faith.”

And, he added, “Certainly a lot depends on the dedication of the missionaries, but evangelization has many facets.”

“Whatever we do, social work, education, humanitarian aid, it all has an impact on society.”