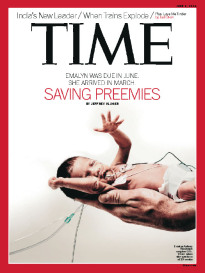 A front cover photo for the new TIME magazine unintentionally sends as strong a pro-life message as we could ever want: “Saving Preemies: Emalyn was Due in June, She arrived in March.”

Written by Jeffrey Kluger, the home base for the story is the Neonatal Intensive Care Unit (NICU) of the Children’s Hospital of Wisconsin in Milwaukee. He writes a realistic but deeply optimistic profile of little David Joyce that explains the how and why of what TIME calls “A Preemie Revolution: Cutting-edge medicine and dedicated caregivers are helping the tiniest babies survive—and thrive.”

At the risk of stating the abundantly obvious, the incongruity (to put it mildly) of aborting the same age baby that is tenderly, lovingly cared for by a “SWAT team” of devote specialists is hard to ignore—or understand. Babies whose lives everyone is desperately trying to save could have been—and are—aborted. Bear in mind these little ones are sensitive to pain.

I found a way to read the article before it was online (the June 2 issue should be in stores now), and I want to share some of the amazing information embedded in what is a lengthy and powerful account. Here are four thoughts:

#2. Kluger writes objectively about the most difficult and challenging cases but adds (as he should), “Thanks to advances not available even a few years ago, the odds of surviving and thriving are improving all the time. Lives that once might have begun and ended in a NICU can now be lived long and well—and there are many reasons that’s true.”

#3. There is an amazing graphic which shows many of the major problems these preemies face and what is being done now to improve survivability. To name just one, the brain. “Blood vessels that are not yet fully developed may bleed into fluid-filled areas of the brain.” What’s being done? “To reduce swelling and relieve pressure, a tube in the brain can drain excess fluid.” There are other brilliantly innovative approaches to address the problem of immature lungs and bolstering the baby’s immune system,

#4. Without going into detail, because of the adoption of common protocols, it is less likely a baby will die just because of which hospital they are a patient at. “Typical of the best of the new breed,” Kluger writes, is the Level IV NICU at Children’s Hospital of Wisconsin which has “a 97.5% discharge rate for preemies in the 2.8-to-3.5 Ib. range.”

Of course, some babies are born so early that not even the most skilled hands can save them. Kluger’s account of the care with which the hospital prepares parents for the end tells us that their baby has been respected and that his or her life, however brief, mattered.

“More and more, however, the life is saved, the baby does come home, and there are plenty of sunny days and starry night ahead. In some way, the work of a NICU will always seem like an exercise in disproportion—an army of people and a mountain of infrastructure care for a pound of life.

“But it’s a disproportion that speaks very well of us. The babies, increasingly, are reaping the benefits.”

Yes, it speaks very well of us. Each baby matters. Each baby deserves our greatest effort. And by so doing, we are collectively a more caring and decent people.

We believe that every baby—born and unborn, “wanted” and “unwanted”—deserve what some would consider a disproportion amount of love and affection and, most of all, protection.

If we won’t do it for them, who will we do it for?