Prose Introduction to My Poem,
Constantine’s Flight to Constantius 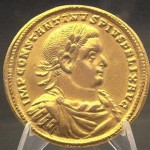 Diocletian had been governing the Roman Empire since 284, eventually establishing his headquarters at Nicomedia in western Asia Minor.  Nine years into his reign, Diocletian set up the First Tetrarchy (293-305), dividing the Empire into four huge prefectures.  Each prefecture had a tetrarch, a sort of regional Emperor, presiding over three of the twelve dioceses which comprised the entire Empire.

Marriage alliances and other interlocking political arrangements were supposed to keep the four sovereigns in concord with one another.  Constantine’s father, Constantius, governed the most westerly prefecture, consisting of three dioceses – two in Gaul and the third in Britain.  His capitol was at Trier, and his last campaign was against the Picts in Britannia with his base at York where, in 306, he died.  The historian, George Philip Baker, characterizes Constantius as a man of “rough and genial humanity,” who gave other men the “liberty to think their own thoughts and work in their own ways.”[1] 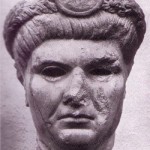 In 303 Diocletian launched a concerted, Empire-wide attack on Christianity, perhaps a little reluctantly given that his wife and daughter were both favorable to the Christian religion.  Still, he pressed forward with his Great Persecution, probably under strong pressure from Gelarius, “the Beast,” one of the four tetrarchs.

From boyhood on, Constantine, the eldest son of Constantius, served as tribune under Diocletian and Gelarius in Nicomedia.   To keep Constantius loyal to the other emperors, young Constantine was retained as a “virtual hostage.”[2] Imagine yourself in the princely son’s shoes, now contemplating his daring escape – thus my poem references Constantine as “you.” 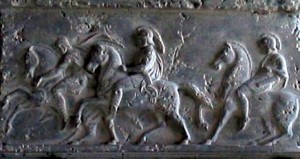 The late professor of classics, Thomas G. Elliott, states that when Constantine took control of the western domains following the death of his father (306), Constantine had “the advantage of starting out with the Christian officers of Constantius.”[3]  In addition, Constantine’s retinue during his famous military campaign against Maxentius in Rome (312) would include Bishop Ossius of Cordova, who later presided at the Council of Nicaea.  The three civil wars under Constantine – 312, 316-317, and especially the “holy war” of 324 between a Christianizing West and the officially pagan East – indicate that the militarization of the Christian revolution (which for the first 2½ centuries was predominantly pacifist) must have begun in the West.

Early in 303 A.D. –
An imperial killing spree.
“Gospel betray, or we’ll kill ye;”
So did the Emperor decree.

Some there were in Diocletian’s court
Who’d stay with Christ, come what may.
Prisca, the Empress, did exhort:
“Cease thee to torture and slay!”

Her plea her husband heeded not,
Tho she, indeed, he deigned to spare.
Likewise their daughter vainly sought
Mercy on confreres, in prayer.

Watching this scene, O Constantine;
Fearful, anguished and ashamed:
Loathing, longing to stop this scheme,
But on guard, lest you be blamed.

Your father, in Gaul faraway
Long sought his son’s arrival.
But he feared you’d be forced to stay
By foes lusting for title.

Like base Galerius, “the Beast,”
As gross as you were fine.
The Empire he ruled in the East;
His flaw was women and wine.

One cup-filled eve, by plot deceived,
The Beast freed up your pass-port.
That night you rode; too late perceived;
Taking your leave of his court.

Your horse was swift, your men were loyal
Like Pony Expressmen flew.
Behind you came pursuers royal
Determined to make you rue.

Ten miles out, you reached a redoubt;
And each post-horse you claimed.
Then on fresh mounts you all rode out,
But, hamstrung, the rest were maimed.

Pursuit was slow; your flight was fleet,
And over the Alps you went.
The Beast was wroth; escape was sweet;
Galerius’ net was rent.

Some sixteen hundred miles.you reached
Arriving the coast of Gaul.
Your sire you found, who had beseeched
His eldest, grown so tall.

Midst tears of joy your men were glad;
Both father and son relieved.
As, O prince, you embraced your dad,
Liberation was conceived.

There in the west your father ruled,
But soon he would end his days.
And during your reign, Christians schooled
To master the marshal ways.

Many would pray, and some would fight
When you marched on Rome for right.
And then, O Prince, little delay,
To expand the Gospel’s sway.