Trending Now
You are at:Home»The Catholic Family»Education»God and Seeker at Boston College
By Trent Beattie on August 17, 2012 Education, Featured 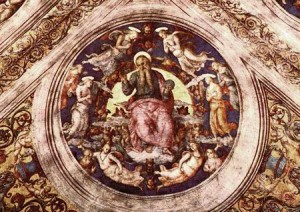 Students at Boston College who learn solid proofs for the existence of God have an atheist professor to thank.

A little over 20 years ago, a history professor at the Jesuit college was advocating atheism in one of his classes. When Jesuit Father Ronald Tacelli, a professor of philosophy, learned of the class, he thought that if someone was not just conducting a survey course on atheism but was actually promoting atheism, he should do the same type of class for theism.

That’s just what he did, and with great results. Every year, Father Tacelli’s undergraduate philosophy course — “Does God Exist?” — attracts students who are unsure of or even hostile to the existence of a divine being. Prior to taking the course last fall, sophomore Matthew Johnson was skeptical, even “frustrated” with those who attempted to prove the existence of a divine being, saying he found those attempts “futile and wasteful at best.”

However, he saw the course itself as anything but futile because it improved his understanding of theism and gave him more respect for theists: “The class helped me to widen my views to incorporate proofs for God’s existence that were neither dogmatic nor far-fetched. I now consider myself, as Father Tacelli would say, ‘on the search.’ I don’t know if I believe that a God exists or not, but I was not even open to the idea of a God’s existence before Father Tacelli’s class.”

Michael D’Andrea had a similar experience. The sophomore business major said he was skeptical going into the course because of the “obvious bias” of the professor, but was pleasantly surprised with the amount of debate the course generated. He believes Father Tacelli went to appropriate lengths to include high-quality arguments from both religious advocates and atheists.

“What I can say now about the experience is that it was one of the most thought-provoking courses I have taken at Boston College,” he said. “I had been indifferent about the question of God’s existence before college, but became more and more interested after taking philosophy my freshman year. I decided to take the ‘Does God Exist?’ course because I was interested in the premise of the title and the debate proposed.”

D’Andrea shared the concern of many people regarding the simultaneous existence of both a divine being and an evil being.

“People today who do so much as open the newspaper can see the prevalence of evil and injustice,” he said, “so I had a very difficult time comprehending how a God all-powerful and all-good could allow such things to occur.”

He found the answer in human freedom, pointing out, “We must be free to do both good and evil for either to exist. Although they do not both need to exist in actuality for the other to exist, they must both be potential for the other to truly exist. If there’s not the possibility of doing evil, then there can’t really be good, because that would be automatic and not freely chosen. It wouldn’t be a genuine decision, but a compulsion. It would be forced, but that’s not what occurs.”

Force was not something that occurred in the classroom, either. Father Tacelli stated at the beginning of the semester that students were free to disagree with him, and he encouraged them to express their views, which would have no bearing on their grades. On the first day of class, students were asked to write down their personal beliefs regarding the existence of God. The class of 40 was then divided into small discussion groups based on the responses, with an emphasis on including varying opinions within each group.

Father Tacelli believes that concepts are learned better through the give-and-take of discussions, which were not emphasized in his first 10 years of conducting the class. He said he “used to do pure lecture for most of the class time, but discovered that wasn’t as effective as I wanted it to be, so I opened it up for more discussion. It is essential to have the various proofs for God’s existence explained, which I still do, of course, but now there’s more emphasis on the specific issues the individuals in the class are facing.”

Senior history major Christine Donahue appreciated the respect Father Tacelli had for individuals. She said the priest “would listen to students’ specific arguments and respond to them, instead of doing what teachers can sometimes do: They totally miss the whole point of the question and reply with an answer so far off topic that it leaves the student confused, and then he just smiles and nods. That’s not what Father Tacelli did at all. If a student had a good point, he would admit it; but if there were tons of holes in the argument, he would point them out and suggest ways they could be resolved.”

Donahue enjoyed such discussions and clarifications, because she was better able to understand belief in God.

“Being a Catholic myself, the class offered me a chance to learn personal, scientific and rational arguments that show the existence of God,” she said, “but it also challenged me to use that knowledge to defend what I believe about God and faith on my own during our small-group discussions with other students.”

In addition to these discussions, Father Tacelli would meet one-on-one with each student on a regular basis.

“It’s wonderful to see the true depth of young people, who are often looked upon as ‘shallow kids,’” he said. “It’s a blessing to witness them coming to terms with the deepest questions a person can ask, and it fills me with a tremendous respect for their personal and spiritual struggles.”

This is a different experience from the other philosophy courses he teaches.

“With my other classes, there’s a purely academic pressure to conduct the class well, but with this class specifically, there’s an added spiritual pressure,” he said. “I feel these students have been given to me by God to look after, and I have a responsibility to present them with compelling arguments. I’m not the sharpest knife in the drawer, but, then again, I’m not the dullest one either, so I definitely feel that responsibility to communicate accurate information on this most important question. If there’s a problem in communication, then it’s with me and not with the evidence.”

Much of that evidence has been complied by Father Tacelli and his Boston College colleague Peter Kreeft in Handbook of Catholic Apologetics (Ignatius, 2009). This book is a main source for the arguments used in the class and is supplemented with other sources, such as God Matters and God Still Matters, both by Dominican Father Herbert McCabe. Not one to confine the study to one semester, Father Tacelli ends the course by giving individual students books he thinks would be particularly useful to them on their journeys. “The study doesn’t end with the last day of class; it’s something that lasts throughout life, so I like to leave the students with more to think about.”

Matthew Johnson has continued thinking about God, in part by reading books from Father Tacelli, including Progress and Religion by Christopher Dawson and Mere Christianity by C.S. Lewis. Johnson says that “Father Tacelli has been an excellent advisor, guide and mentor on this journey, and though he has certain beliefs and articulates and advocates them strongly, I never felt judged or looked down upon because I wasn’t ‘a believer.’ In fact, what he teaches and how he teaches it have opened up the possibility of me becoming ‘a believer.”

Many students have had their anti-religious assumptions checked, and unsure theists have had their beliefs strengthened. But have there been any theists who become atheists after the course? Father Tacelli let out a hearty laugh at the question.

“I hope not,” he said, “but maybe I didn’t present the case too well in specific instances. However, the overwhelming majority of students leave the class with a renewed respect for religious beliefs and a renewed understanding of them.”

He concludes: “In one sense, we do have that atheist professor to thank for providing the motivation for my teaching the ‘Does God Exist?’ class. Without him, I may never have come up with the idea.”