Trending Now
You are at:Home»Featured»“Christian Terrorism”?
By Raymond Ibrahim on August 4, 2011 Featured, On Media

In light of the Norway terrorist attack, and as expected, the hail of religious relativism has begun—the idea that, if a “Christian,” such as Breivik, commits terrorism, then it is folly to assert that certain Muslim doctrines inspire violence and terror: all becomes relative. A recent AP report titled “‘Christian terrorist’? Norway case strikes debate,” makes this clear:

As westerners wrestle with such characterizations of the Oslo mass murder suspect, the question arises: Nearly a decade after 9/11 created a widespread suspicion of Muslims based on the actions of a fanatical few, is this what it’s like to walk a mile in the shoes of stereotype? “Absolutely,” said Mark Kelly Tyler, pastor of Mother Bethel African Methodist Episcopal Church in Philadelphia. “It clearly puts us in a position where we can’t simply say that extreme and violent behavior associated with a religious belief is somehow restricted to Muslim extremists.” “It speaks to cultural assumptions, how we are able to understand something when it (comes from) us,” Tyler said. “When one of us does something terrible, we know that’s not how we all think, yet we can’t see that with other people.” Psychologists say stereotypes come from a deeply human impulse to categorize other people, usually into groups of “us” and “them.” 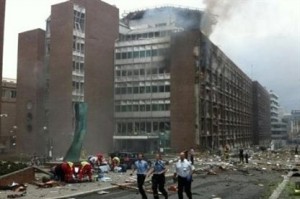 The report goes on to give the opinions of an array of sociologists, anthropologists, and psychologists, who regurgitate the same aforementioned themes on “a fanatical few,” “extreme and violent behavior,” “cultural assumptions,” and “stereotypes.” Not once do any of these soft-scientists bother investigating, let alone pointing out, what Christianity and Islam actually teach regarding violence.

Nor do they seem cognizant that there is a major difference between what people do in the name of religion and what the religion itself commands—just as there is a major difference between historical descriptions of war in the Bible and timeless prescriptions to wage war in the Koran (see “Are Judaism and Christianity as Violent as Islam?” for a full treatment of these issues).

Nor are these important differences limited to theory, but rather manifest themselves in reality: when jihadists attack in the name of Islam, such as on 9/11, high-ranking Muslim clerics praise them and Muslims celebrate in the streets; conversely, no Christian preacher has praised Breivik’s terrorism, nor are Christians dancing.

“Breivik is not a Christian. That’s impossible. No one believing in Jesus commits mass murder,” Bill O’Reilly said on his Fox News show. That makes sense to Joyce Dubensky, CEO of the Tanenbaum Center for Interreligious Understanding. She said it also makes sense that “millions of Muslims say Osama bin Laden is not a Muslim, that no one who believes in the prophet Muhammad commits mass murder.”

Note again how the stress is entirely on what people “believe” and “say”—not what Christian and Muslim doctrines so unequivocally teach. Worse, that “millions of Muslims say Osama bin Laden is not a Muslim” is a curious assertion, considering that the Obama administration saw that he was given an Islamic burial so as not to anger the Muslim world (jihadists who go down in sea receive double the brownie points that land-dying jihadists receive—which are already considerable, a la 72 celestial concubines, etc.).

The one rare mention in the report of actual teachings comes from another psychology professor: “If you’re a Christian and you see this Norway murderer, you say, I have these teachings and I haven’t murdered anyone, so the teachings can’t be the problem. But if you’re talking about the ‘other,’ it’s different. And if you don’t know what the actual Muslim teachings are, it seems like a plausible explanation.”

Quite the contrary, if you know what Islam teaches concerning the jihad and the non-Muslim—tellingly known as the “infidel”—violence becomes a very “plausible explanation.”

If lamentable, none of this is surprising: because Western secularists cannot fathom the importance of doctrine to believers; cannot take religion seriously—seeing all scriptures as little better than poetry to be interpreted any which way—they project their indecisive worldview onto the decisive other, much, ironically, to secularism’s own detriment.