Trending Now
You are at:Home»Featured»Christians Struggle to Rebuild Their Lives in Syria
By ACN-USA News on October 21, 2014 Featured, International Issues, Those in Need 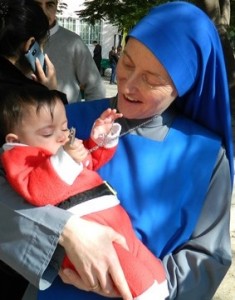 “War is a terrible and cruel thing.”

SISTER MARIA of Nazareth has committed herself to an extraordinary mission. The Argentinian nun from the Institute of the Incarnate Word has been living in Aleppo, Syria, for the past two months, ministering to a traumatized Christian community in the former million-strong metropolis in the north of the country, which has suffered some of the worst violence of the three year-old civil war.

Previously based in the Gaza Strip, Sister Maria has seen her share of violence. “Our task in this country is very special. We are constantly confronted with people’s suffering. The war is having a profoundly deleterious effect on human dignity. People are losing their loved ones, their freedom and their rights due to the violence. On top of this there is poverty and a lack of the most basic things, such as electricity and water,” the young nun reports.

She lives in the compound of Apostolic Vicariate of the Latin Rite in Aleppo, together with some fellow nuns. All of Syria’s Roman Catholics in Syria fall under the Vicariate. Reports Sister Maria: “We work in a hostel for female students at the local university, which is operated by the Vicariate. We also take care of the sacristy and the liturgy in the cathedral. On top of that, we look after the faithful who visit the cathedral. Our main task is to listen to the people who are suffering, offer them words of hope, and help them best we can to meet their most basic needs.

“Certainly only the words of Our Lord Jesus Christ can bring about the miracle of sowing the seed of hope in these souls. But war is a terrible and cruel thing.”

Archbishop Jean Abdo Arbach of Homs, Hama, and Yabrud knows this all too well. The Melkite spiritual leader is coping with huge damage in his diocese, whose history goes back to the 4th century. Dozens of churches, some dating back to the local Church’s very beginnings, have been damaged or destroyed.

“Last February, an armed gang broke into the Church of Our Lady of Yabroud, a 4th century church. They destroyed the fittings in the church, smashed the crucifix, threw the icons on the floor and tore the pages out of the Gospel. Then the gang burned the altar,” the archbishop recounts.

However, some churches were destroyed not by the rebels, but by the Syrian army, such as the Church of St. George in nearby Nabek, which crumbled under an army bombardment in November 2013.

Not only the infrastructure of the diocese is in terrible shape—it’s mainly the people of the region. “To date our archdiocese has counted 96 martyrs. The fate of 26 people is uncertain,” the archbishop notes. More than 1800 families from his diocese have left their houses to seek safety elsewhere in Syria or have fled to Lebanon.

“From my visits to the houses of the families and from the reports by my priests, it is clear that everyone has been hurt by the tragic events. We have begun to support about 600 families with monthly assistance,” says the prelate, explaining that Syria’s high inflation rate is causing the local community great difficulty: “The prices are shooting up while wages are stagnating.”

Despite all the hardships, however, the archbishop affirms that there are no signs that people’s spiritual life is collapsing, however. On the contrary, he insists: “the crisis has triggered a major return to faith and prayer among those who have not left their villages. Though having to deal with fear and the constant threat of bombs, families are remaining loyal to their religious convictions.”

The local Church is doing what it can to continue its catechetical work to ensure that the faith is passed on to children and youth. “About 3300 young people take part in our catechetical classes. Some 350 teachers are looking after them,” the archbishop reports.

Still, a number of Church facilities were those classes are held have been damaged in the fighting and Archbishop Arbach relies on help from Catholic charities to find the means for repair and rebuilding initiatives. “Our Church needs help of all kinds: spiritual, material, medical and psychological. The Church in this part of Syria will be in real danger if we don’t react quickly,” he warns.