Trending Now
You are at:Home»Featured»Isn’t She Lovely: A Million Grandfathers Say
By Mark Davis Pickup on October 21, 2014 Featured, Men, Parenting 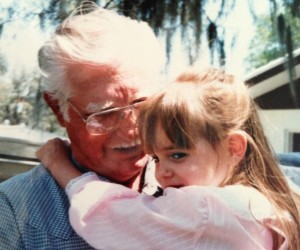 In 1976 my daughter was born. I was head-over-heels in love with her. At the time I was a commercial writer for a television station; I remember clicking away on my manual typewriter in time with a new tune by Stevie Wonder: Isn’t She Lovely. To me (and a million other new fathers) that song title did not end with a question mark, rather an exclamation point!

We watched our daughters grow through infancy to toddlers, from little girls to teenagers, from high school to college. And then they were young women leaving home and we wondered where the time went? Stevie probably wondered too.

I remember one day my daughter called home to say she was engaged. A little later I struggled to walked her down the isle. (It was one of the last times I walked.) When my wife and I arrived home after her wedding, the sound of our mantle-clock that quietly ticked away the years now thundered in my ears declaring that time marches on. I went down the hallway and entered what had been my daughter’s bedroom.

There were no sheets on the bed and the pillow that once held her head had no pillowcase.  The closet was open and empty except for a forlorn Cabbage Patch doll sitting on an upper shelf.  All that remained were four walls and an echo in the room. I took the doll from the shelf and laid it on the bed. Looking down at it brought back a flood of memories. My heart broke. I fell upon the bed and buried my head in her pillow and wept.

A chapter of my life closed, but it would not be too long before another chapter began: Being a grandfather. Today, three granddaughters grace my world. When I am with any one of them I say once again, Isn’t she lovely — just like a million other grandfathers.