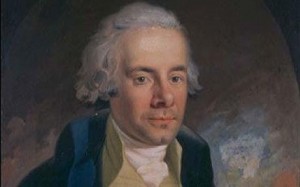 Christmas is about self-giving love. God becomes human to set humanity free from the oppression of sin and death.

Accepting Christ, and celebrating Christmas, means welcoming that freedom, and striving that every human being may experience it. Hence we evangelize.
And hence we work for justice. “Truly he taught us to love one another; His law is love, and His Gospel is peace. Chains shall He break, for the slave is our brother, and in His name, all oppression shall cease.” (“O Holy Night”).
Abolitionists used this verse of this Christmas hymn to stir their fervor to end slavery. Today, we in the pro-life movement use it to stir our fervor to end abortion.
And we do so in the spirit of William Wilberforce, the key catalyst in the abolition of the slave trade. In his “Abolition Speech” to Parliament on May 12, 1789, he expressed the human imperative that took hold of him and made his commitment to abolition absolute:

“How then can the House refuse its belief to the multiplied testimonies … of the savage treatment of the negroes in the middle passage? Nay, indeed, what need is there of any evidence? The number of deaths speaks for itself, and makes all such enquiry superfluous. As soon as ever I had arrived thus far in my investigation of the slave trade, I confess to you sir, so enormous so dreadful, so irremediable did its wickedness appear that my own mind was completely made up for the abolition. A trade founded in iniquity, and carried on as this was, must be abolished … let the consequences be what they would, I from this time determined that I would never rest till I had effected its abolition.”

Three years later, on February 18, 1796, he made another motion for abolition in Parliament. Weary colleagues called for “suspending the question” until the end of the year. Wilberforce responded,

“There is something not a little provoking in the dry, calm way in which gentlemen are apt to speak of the sufferings of others. The question suspended! Is the desolation of wretched Africa suspended? Are all the complicated miseries of this atrocious trade – is the work of death suspended? No sir, I will not delay this motion, and I will call upon the House not to insult the forbearance of Heaven by delaying this tardy act of justice!”(Metaxas, p. 163)

Notice what motivates him. The humanity of the victims connects with his humanity. He did not observe the oppression from a distance, or keep himself emotionally detached from the plight of the slaves. He was not afraid to be moved — and that is the only way he moved others.
Yet so many try “not get too worked up” about the abortion tragedy. But that is precisely the wrong approach. We will end abortion only when enough of us connect, both mentally and emotionally, with the human tragedy it represents, and then drink deeply of that human imperative, and become inebriated with that holy impatience.
Share. Twitter Facebook Google+ Pinterest LinkedIn Tumblr Email
Previous ArticlePoem: “With My Hand I Set This Pen”
Next Article Jeremiah, Christmas Trees, and the King James Bible